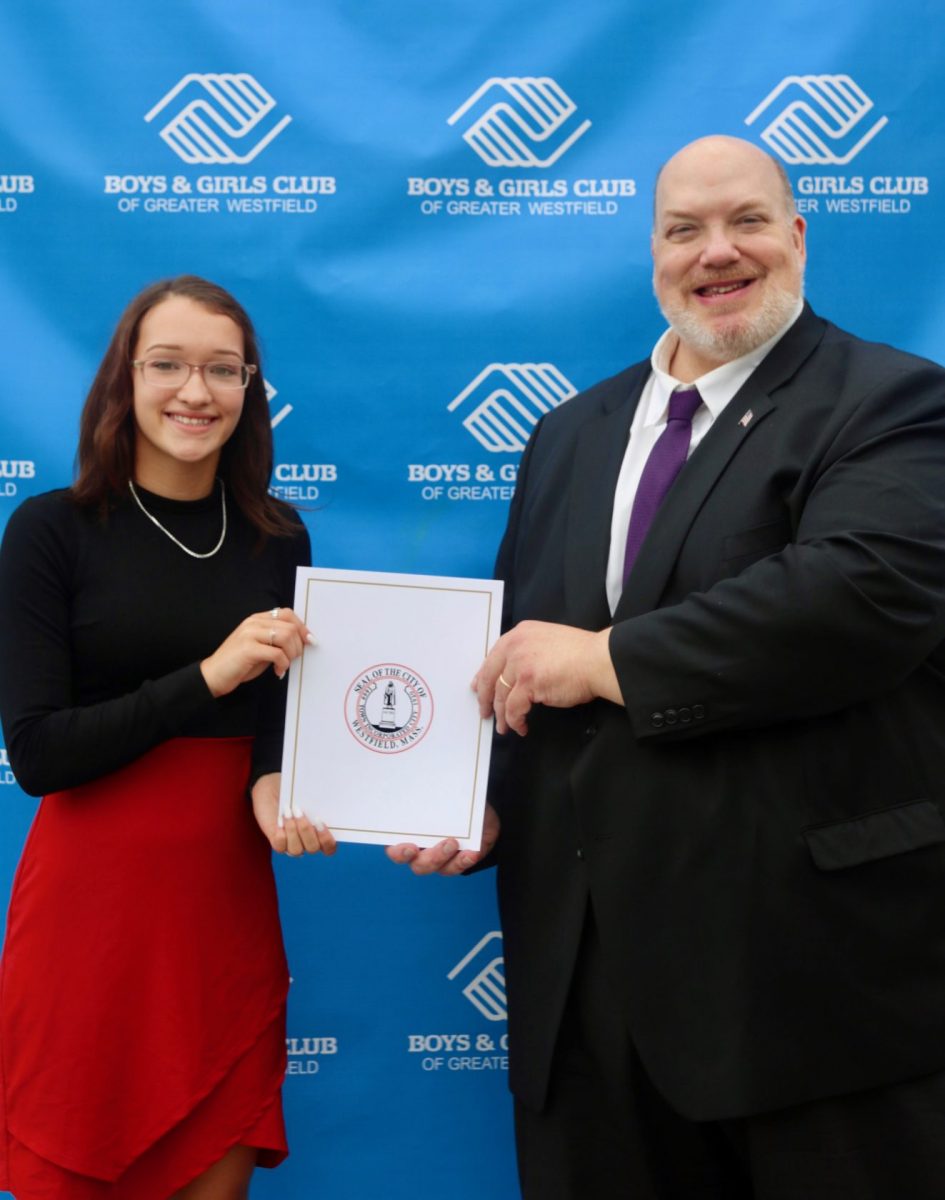 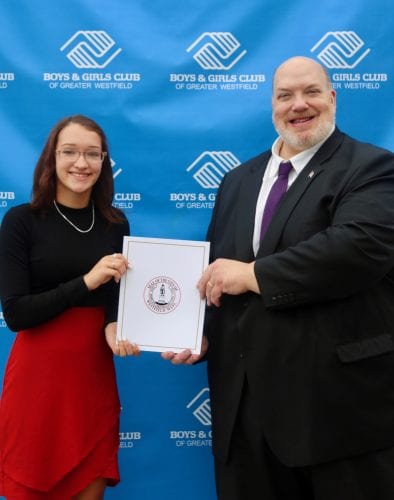 WESTFIELD – On July 8, Mayor Donald F. Humason, Jr. presented a citation from the City of Westfield to Jenalyse Ayala, the Greater Westfield Boys and Girls Club 2020 Youth of the Year.
“I am so pleased to be able to present a citation from the Mayor’s Office to Ms. Jenalyse Ayala who was selected as the Greater Westfield Boys and Girls Club 2020 Youth of the Year,” Humason said at the presentation.
Jenalyse Ayala has been a member of the Boys and Girls Club of Greater Westfield for 13 years. Currently, she serves as an assistant teacher in Kidz Klub, the Club’s licensed child care program; a bus monitor and president of the high school leadership group, Keystone.
Ayala, who graduated Westfield High School early in 2019, plans to attend Holyoke Community College in the fall, with the goal of becoming either a child psychologist or a social worker. When asked about her experience at the Club, she said, “Without the Club, I would not have learned the importance of responsibility, the value of being my own person, and the significance of challenging myself. I can proudly say that growing up at the Club has shaped me into the young adult that I am today.”
Program Director Ashley Miehm served as mentor to Ayala during the extensive application process, which includes three essays, three letters of recommendation, a resume, cover letter and interviews. “It’s a big process,” Miehm said. Winners receive scholarship awards towards higher education.
“It was awesome working with her. She’s a very hard worker, and had her entire package to me very quickly. She made the whole process very easy and fun for me. I’m very proud that she had this experience and is our local Youth of the Year,” Miehm said.
The three other 2020 nominees for Youth of the Year, who also received scholarships include Alyssa Rodriguez, a graduating senior at the Westfield Technical Academy, who has been a member of the Boys & Girls Club of Greater Westfield since she was in kindergarten, and works at the Club as a bus monitor and Kindergarten Assistant Teacher. In the fall, Rodriguez will be pursuing a degree in Dance Education at Northern Vermont University.
Gracia Jorgensen is an 11-year member of the Boys & Girls Club of Greater Westfield. When she isn’t taking dance classes or studying, the WHS junior is a member of the Junior Staff and works both as a bus monitor and as an assistant in the 21st Century Program. Jorgensen hopes to continue her education at a state university and pursue her dreams of becoming a performing arts instructor.
Vivian Szostek who will also be a junior at Westfield High School in the fall, has been a member of the Boys and Girls Club of Greater Westfield since she was in elementary school. Currently, she is a member of the Club’s Keystone Elite and a mentor for the Club’s STEM program. When she is not contributing to Club events or working as a bus monitor, Szostek spends most of her time in the Dance Company, where she is a part of the competitive team and an assistant to the dance instructor.
Since the early 1970’s, the Boys & Girls Club of Greater Westfield has run the national Youth of the Year recognition program that promotes good moral character, leadership and service qualities in today’s youth. It is a year-round program for youth ages 14 to 18 that promotes and celebrates members’ service to the Club; community and family; academic performance; moral character; life goals; poise and public speaking abilities. It is the cornerstone of the organization’s Character & Leadership Development core program area, helping young people focus on personal development attributes needed to successfully transcend into adulthood.
“Everyone here at the Club is so proud and so excited to see where Jenalyse, Vivian, Alyssa and Gracia go from here. These teens worked so hard, and when school and the Club closed due to covid-19 – they just worked harder. Our staff mentors worked virtually alongside the candidates to complete their Youth of the Year packets and prepare for judging,” stated Club administrators in their announcement of the awards.