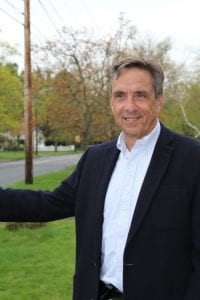 WESTFIELD- Mayoral candidate Capt. Michael A. McCabe talked about his plans for the city if he were to become mayor and took audience questions Monday morning at the monthly Mayor Coffee Hour.

Mayor Brian P. Sullivan chose to forgo his time to address residents and business owners in the city in order to give the two candidates a chance to speak before the same audience.

McCabe began by speaking about how he got started in Westfield’s Police Department and how he came to live in Westfield in the first place.

“Currently, my role throughout the Police Department has been in every different role you can imagine.” said McCabe.

He stated that his position as captain prepares him for a position like the mayor because he took the role of budget and personnel manager. He was asked to keep the $8 million police budget neutral with neither a deficit or surplus.

Part of his plan for the budget as mayor would be to manage waste within the city government, which he said comes not from the people actually in a position to spend money, but with how those positions are actually structured. He thinks the relatively short terms for a lot of positions within the city, including Mayor and City Council, make it so that there is a constant learning curve when those positions are refilled.

“Every time you start a new job, you have to learn that new job,” said McCabe.

McCabe also wants to collect 26 strategic plans from the 26 city departments and merge them together to find a “sweet spot.” After those are reviewed, prioritization of the budget can take place.

McCabe then spoke about his 16 years as president of the Police Union and the negotiations that he had been involved in during that time. When he was promoted to captain, he began union negotiations from the other side of the table on behalf of the city. He said that his experience negotiating from both sides allows him to respect the needs of both sides.

After speaking for 15 minutes, McCabe then took questions from the audience.

The first question was whether McCabe would take a leave of absence from the police department in the event that he is elected. McCabe stated that he would leave the department on Jan. 3.

He was then asked about development on the north side of the city and how he would bring in more business to that part of the city.

McCabe said that he was doing some campaigning in that part of the city and noted that there are several residential streets that drivers are essentially unable to turn left off of onto Southampton Road.

“You have to approach it in two different directions: You have to look at what’s appropriate for a business in that area. You have to look at it from the State’s position as to whether or not the state is able to get the turnpike opened on Blandford and then [add] an opening on Industrial Park Road and move the gantry to the point where it is now to the point that it is a little further up East Mountain Road on the turnpike,” said McCabe.

He added that he wants to see a change to the structure in how rezoning works in the city and shorten the length of the process between the Planning Board, Board of Assessors, and City Council.

He was then asked about the city’s handling of rezoning industrial A zones and marijuana business zones.

McCabe then briefly talked about recreational marijuana in the city and how it is being implemented. He said that it has been handled improperly, and that the stores that are planning on opening in the city should have been opened by now.

“I have no plans right now of rezoning industrial A,” said McCabe, reiterating that the process should be changed so that the vote to rezone an area is not taking place when a possible permittee is before the board. He said the discussion should be happening when you can talk to people without the decision having to be urgent.

He was then asked if he would be able to “make the tough choices” when he needs to regarding labor contracts.

He said that his ability to negotiate on both sides of the union table means that he is the best qualified to make those tough choices.

“I could possibly be the only white, Irish, Catholic, Republican union president in the history of mankind.” said McCabe, drawing laughter from the audience.