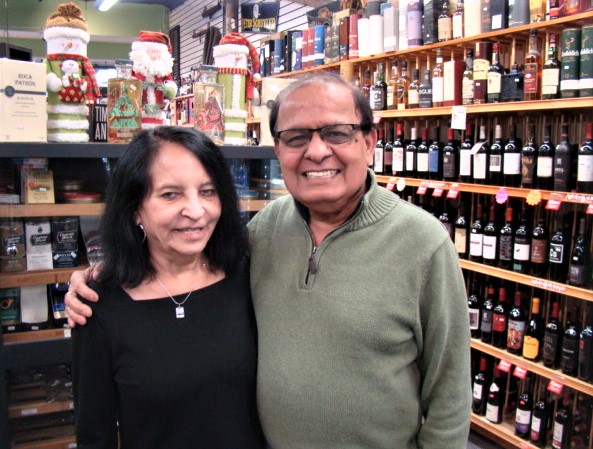 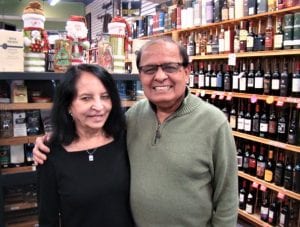 WESTFIELD – Beginning on Friday morning, Prob and Mina Reshamwala of Mina’s Wine & Spirits at 53 Elm St. are offering a 10% off sale on all bottles sized 750 ml and higher of regular-priced scotch, whiskey, bourbon, tequila, rum and all wines. The sale will not apply to discounted or special items.
“We’ll keep it simple,” Prob said, adding that the sale will coincide with the start of the Westfield Shop Small weekend FNov. 29 and Nov. 30, where shoppers are encouraged to visit 10 participating local merchants to receive a stamp on their Shop to Win game boards. Boards are printed in the Nov. 21 Pennysaver.

The sale will end on Christmas Eve, and prices will return to normal after Christmas.
Mina’s Wine & Spirits is also a map-collecting center. Once shoppers have received 10 stamps from participating businesses, they can drop the game boards off at either Mina’s Wine & Spirits, Choice Health, Flowers by Webster, Pilgrim Candle, Skyline Beer Co. to be entered into raffle for the three prizes of $150, $300 and $500 respectively. Winners will be announced next week.
The Reshamwalas, who are active members of the Greater Westfield Chamber of Commerce, sponsors of Shop Small, are all about efforts to support downtown Westfield.

“I always try to promote downtown. Anything to promote the downtown,” Prob Reshamwala said. He added that downtown Westfield is coming around, with a lot of investors buying buildings such as Bentley’s Billiards and Bank of America, and bidders interested in the Elm St. Urban Renewal space across the street.
Mina’s Wine & Spirits and White Lion Brewing also launched the Summer Block Party Series in the parking lot of the store at 53 Elm St., as part of the live music performances held throughout the city. They plan to sponsor the series again this year, with a bigger stage, Prob Reshamwala said.
The Reshamwalas opened their shop in 1982, combining it with the Tobacco Barn that had been the corner of Elm and Main Streets since 1947. Displayed around the ceiling of the neatly arranged store are antique tobacco farm implements and old tobacco plants, as a nod to that history. They also carry a nselection of pipe tobacco and cigars.
The 5,000 foot space has a huge selection of craft beers, and 300 bottles of premium wines, with highly selected labels that can’t be found in other stores, including Russian, Moldovan, Georgian and Armenian selections due to customer demand, and for those who want to try something new. The wines are kept in their wine cellar at 65 degrees year-round.
The Reshamwalas also do their best to cater to customers’ wishes. “If you’re looking for something, we’ll try to get it right away, and let you know if we can’t,” Prob Reshamwala said. He said they are looking forward to shoppers coming into their store this weekend to get their maps stamped.