LENOX – League title … check. 100th coaching victory … check. Undefeated regular season … check. And now, finally, a Western Massachusetts Division 2 golf championship.
It was checkmate for the rest of the field at Tuesday’s D2 championship as last year’s runners-up, the Southwick Rams, took that next step toward attaining the ultimate prize, a Western Mass title.
Southwick (21-0) posted a top team score of 334, besting South Hadley (336) by two strokes at Cranwell Spa & Golf Resort to become the perfect champ on a blustery day with intermittent rain showers that saw inflated scores all around. 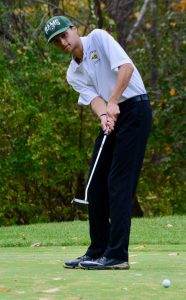 “It’s just crazy,” said Southwick coach Al Selden, whose team fell to Belchertown at Western Mass a year ago. “It’s just one of those dream seasons that you just don’t think’s going to happen. It’s ridiculous.”
Southwick senior golfer James Longhi shot a silver-medal worthy 79 on the par 71 – Wahconah’s Nate Dos Santos won the individual championship with a 75 on his home course – and four other Rams had scores in the 80s to secure the title.
“I knew it was going to be rough,” Longhi said, referring to the less-than-ideal weather conditions. “I told myself, ‘just get the ball in the hole.’ Everybody was playing in (it). I just had to deal with it.”
Longhi struggled out of the gates, shooting an 8 over on the front nine, but turned it around by shooting even par over the final nine holes. He birdied the par-five 15th.
“I kind of just scraped it out,” Longhi explained. “I didn’t do anything real well. I just kept at it.”
Longhi’s teammates persevered as well with one golfer possibly even exceeding expectations of his closest competitors.
Southwick’s No. 6 golfer, Nicholas Kavrakis shot an 83, good for sixth place.
“Nick came through in the clutch,” Longhi said. “Everybody just put in the work to get here. We’ve got a great group of kids. Everybody just got better … as a family.”
Southwick’s Chris Baker shot an 85 in Tuesday’s competition, followed by Rams’ Jack Fairlie and Bradley Durand, who each rounded out the scoring with a round of 87.