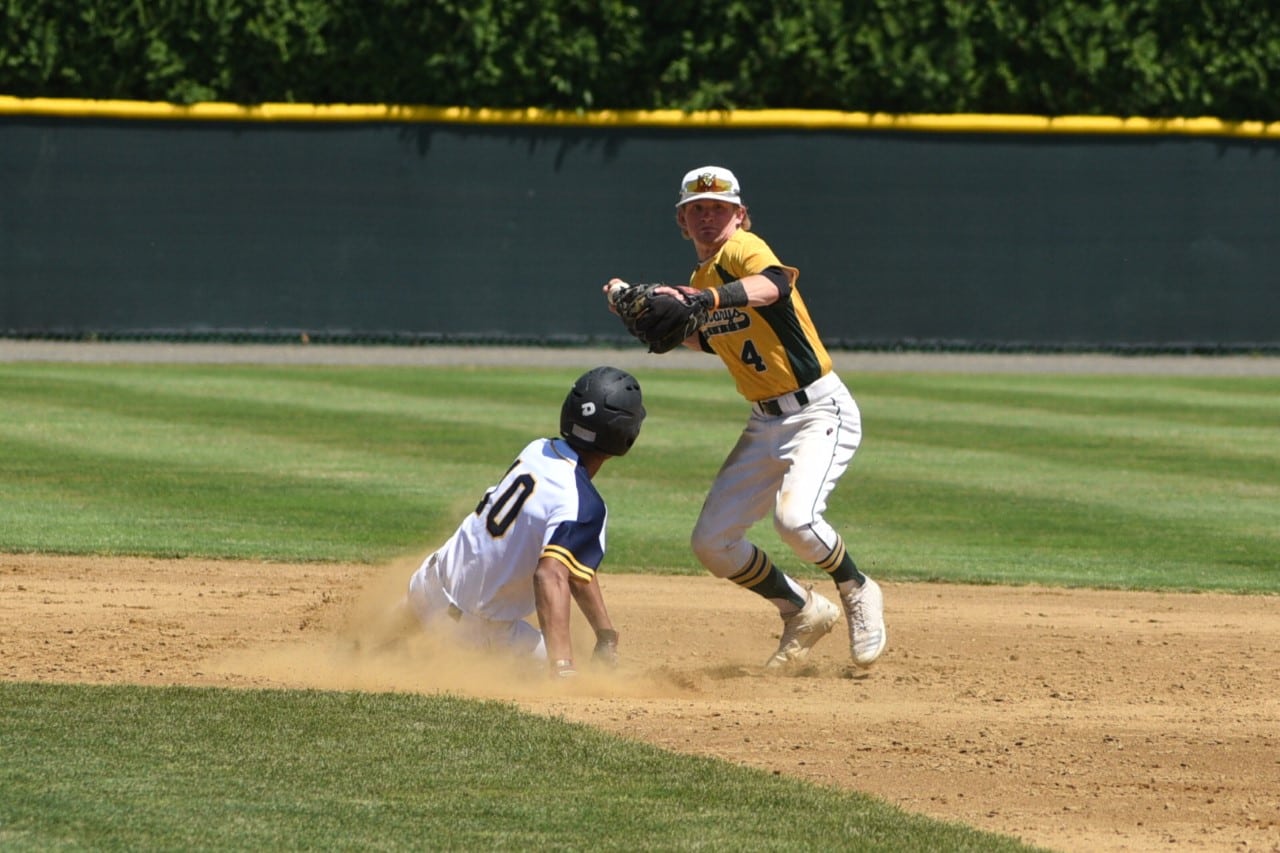 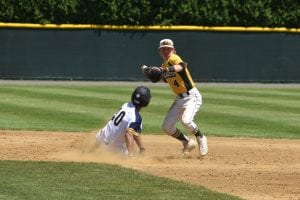 AMHERST – The sun might have been shining brightly down on the St. Mary’s High School baseball team during Saturday’s West Division 4 finals, but the heavens shed a tear on the final outcome.
Hopkins Academy pitcher Jonathan Morrison recorded 16 strikeouts, and the top-seeded Golden Hawks stopped the No. 3 St. Mary Saints short of a repeat, 8-3 at the University of Massachusetts-Amherst.
“We lost to a very good team and arguably the best pitcher in all of Western Mass,” St. Mary’s coach Troy Collins said.
Morrison, who will soon be off to pitch for the University of Rhode Island, had a bit of a slow start against St. Mary’s but that was expected as he started in the quarterfinals Monday and closed out the semifinals Wednesday.
St. Mary’s threatened right out of the gate Saturday with Matt Masciadrelli drawing a lead-off walk. Morrison came back to force two groundouts and a K.
In the second inning, St. Mary’s managed to get the lead-off batter on again as Morrison issued another free pass, this time to Quinn Powers, and the Saints made Hopkins pay. Powers stole second base, advanced to third on a passed ball, and scored when Andrew Florec hit a sharp line drive down the third base line that the third baseman stopped with a diving stab. The throw to home plate was wide, allowing Powers to score easily. 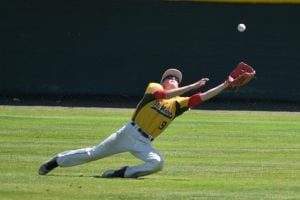 Hopkins responded with two runs in the bottom of the second, forcing St. Mary’s into some uncharacteristic defensive plays. The Golden Hawks scored on a passed ball and John Earle’s bases-loaded walk.
Morrison quickly found his stride.
Hopkins’ ace struck out six straight batters, fanning the side in the third and the first two batters of the fourth inning before Florec smacked a single through the left side. The Golden Hawks’ pitcher recovered though to strike out the next batter to end the inning.
Hopkins struck in the bottom of the fourth inning, loading the bases for No. 2 batter Jack Feltovic, who launched a bases-clearing, three-run double to left center field for a 5-1 advantage.
Morrison continued to cruise before hitting a speed bump of sorts.
In the fifth, Morrison struck out the first two St. Mary batters, making it nine of 10 outs by strikeout.
With two outs, Jack Masciadrelli and Hunter Authier hit consecutive base hits. Jake Butler and Quinn Powers followed with back-to-back RBI singles to cut the deficit to 5-3.
Hopkins made it a three-run lead in the fifth when Noah Scanlon-Dean belted a lead-off triple to right-center field and scored on a one-out single through the left side from Nate Kelley.
In the sixth, Hopkins tacked on a pair of insurance runs. Justin Butterfield delivered an RBI single and Mike Curran blasted an RBI double to left-center field.
“We began the year trying to fill holes and see who was going to take the ball twice a week,” coach Collins said. “Our kids all stepped up, and worked hard. Just to get here is tough … and Morrison was that good.”