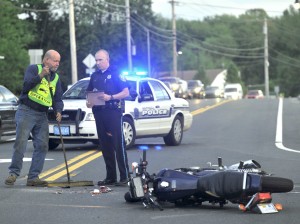 Personal injury crash
Southwick Police Officer Dan Ryan speaks briefly with David Wetherell of Prifti’s Towing at the scene of a crash involving a motorcycle on College Highway Saturday evening. The rider of the motorcycle was transported to hospital by the Southwick Fire Department ambulance with injures which were described at the scene to be serious but not life-threatening. (Photo © 2014 Carl E. Hartdegen)

SOUTHWICK – A Southwick man and his passenger were both injured Saturday evening when a car pulled out of Coe’s Hill Road into the path of his motorcycle.
Southwick officer Paul Miles investigated the College Highway crash and reports that the 18-year-old motorcycle operator had been southbound when he found himself unable to avoid a collision.
The operator and his passenger, a juvenile female, were both transported to Baystate Medical Center where, Miles reports, the operator was treated and released while his passenger was admitted, though her injuries did not appear to be life-threatening.
The operator of the car, a Westfield man, was not injured in the crash.
Miles reports that his investigation is ongoing and asks that anyone who witnessed the crash, or otherwise has pertinent information, call him at 569-5348 x620.