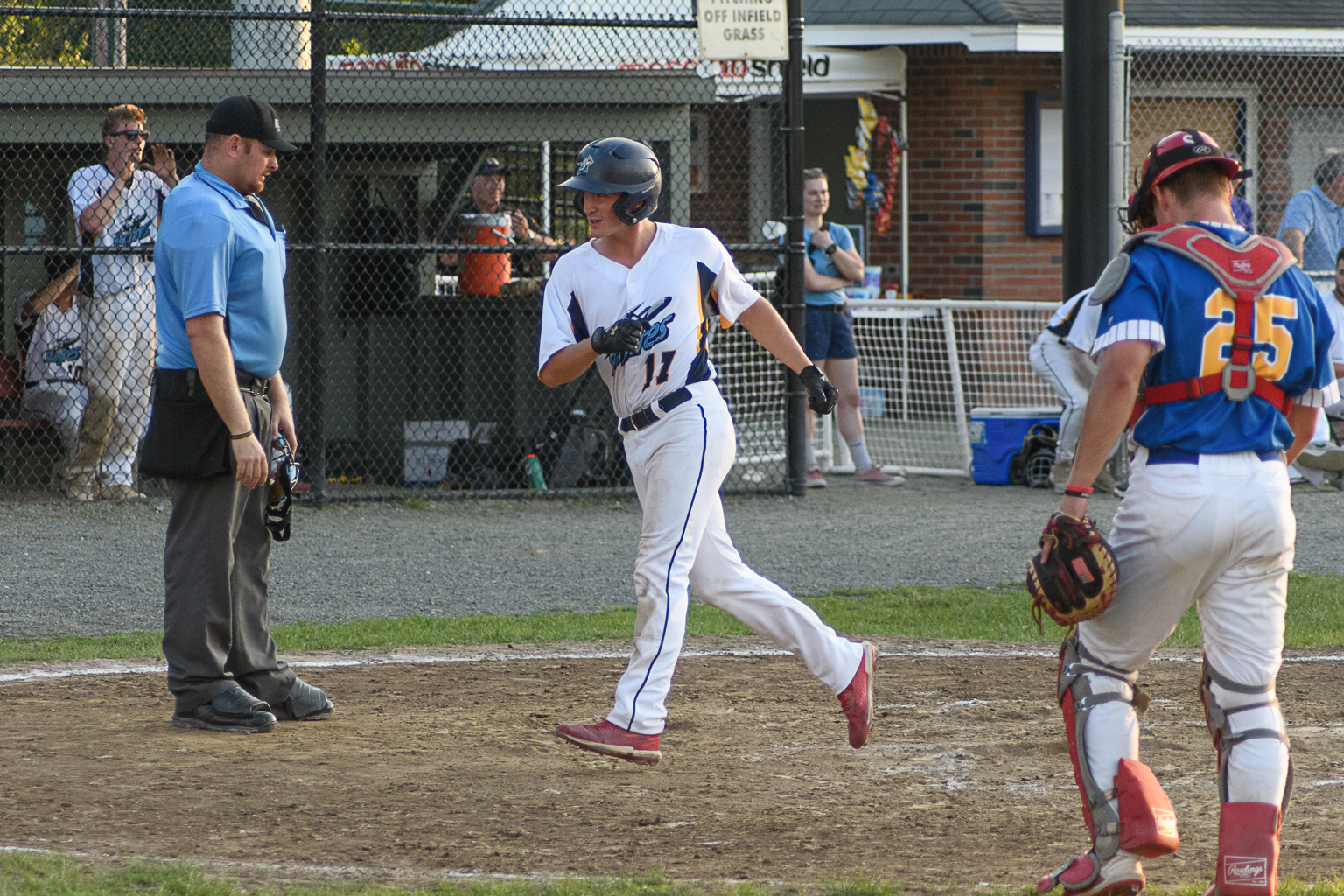 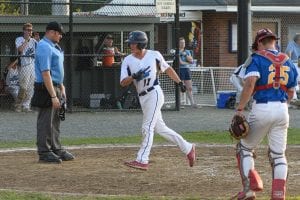 WESTFIELD – The Westfield Starfires played a double header against the North Shore Navigators on Friday night, losing the first game 7–4 … but winning the second with an exhilarating walk-off home run, 8-6.
Game one started off with an early lead for North Shore as the Starfires trailed 3–0 at the end of the second inning, desperate to put some numbers on the board.
Christian Walsh was the first batter up for Westfield in the third inning and with no runs on the board for his team, Walsh did not disappoint.
A hard hit ball to center field sailed over the fence for a solo shot home run, Walsh’s third home run of the season.
Nashua would put up four more runs in the contest, while the Starfires managed to cut the Navigators lead in the seventh, scoring three runs off of two hits and an error. That score would be the final, giving the Starfires the 7–4 loss.
Westfield’s second game of the night was a different story and had a much different energy than the earlier game.
North Shore managed to put two runs on the board in the first inning, forcing Westfield to chase the lead early on.
The bottom of the first inning was quite the spectacle with the Starfires putting three runs across from one hit, two walks, two hit batters and a handful of wild pitches, moving their runners around the bases quickly.
Hits from center fielder Danny Crossen and shortstop Elijah Dale helped to add two more runs to the Starfires score in the second inning.
That Westfield lead did not last long with the Navigators’ Sean Lawlor hitting a three run home run to tie the game up at five runs each in the third inning.
One run for the Starfires crossed the plate in the third and one would come across for North Shore in the fourth making for a 6–6 tie going forward.
No runs would come in the fifth and sixth innings which put the Starfires in a position for a walk-off win, something that they had done three times before on home turf.
First baseman Sean Moorhouse got on base with a walk and Bryce Walker was inserted as a pinch runner.
With one out and Walker on base, pinch hitter and Westfield native Sean Murphy stepped up to the plate hoping to end the game in true Starfires fashion with a walk-off.
Murphy had two strikes on him as he took a powerful swing to make contact with the ball, smashing it into the outfield and beyond the fence for a two-run, walk-off home run.
This marks the fourth time the Starfires have walked off on Bullens Field, and Sean Murphy was glad to be apart of it.
“Whenever you’re in that situation you just have to go up there and find a way to help your team,” Murphy said. “Our guys did a great job putting us in a position so I could do something for us.”
He mentioned that staying in the game was something that the team did collectively, knowing that everyone had to contribute to get the victory.
“It’s an all-around team effort,” Murphy said. “After they came back and tied it 5–5 early in the game we just never stopped hitting and we played good defense, which is exactly what we needed.”
When asked how he felt knowing that the homerun was the deciding factor of the game, Murphy explained that he was excited to be able to help his team.
“I was just happy that I could be in that spot and that they picked me to go up there in a big moment,” Murphy said. “The fact that I could help my team win is just amazing and it’s a great win against a great team.” – Courtesy of Audrey Gamble/Westfield Starfires