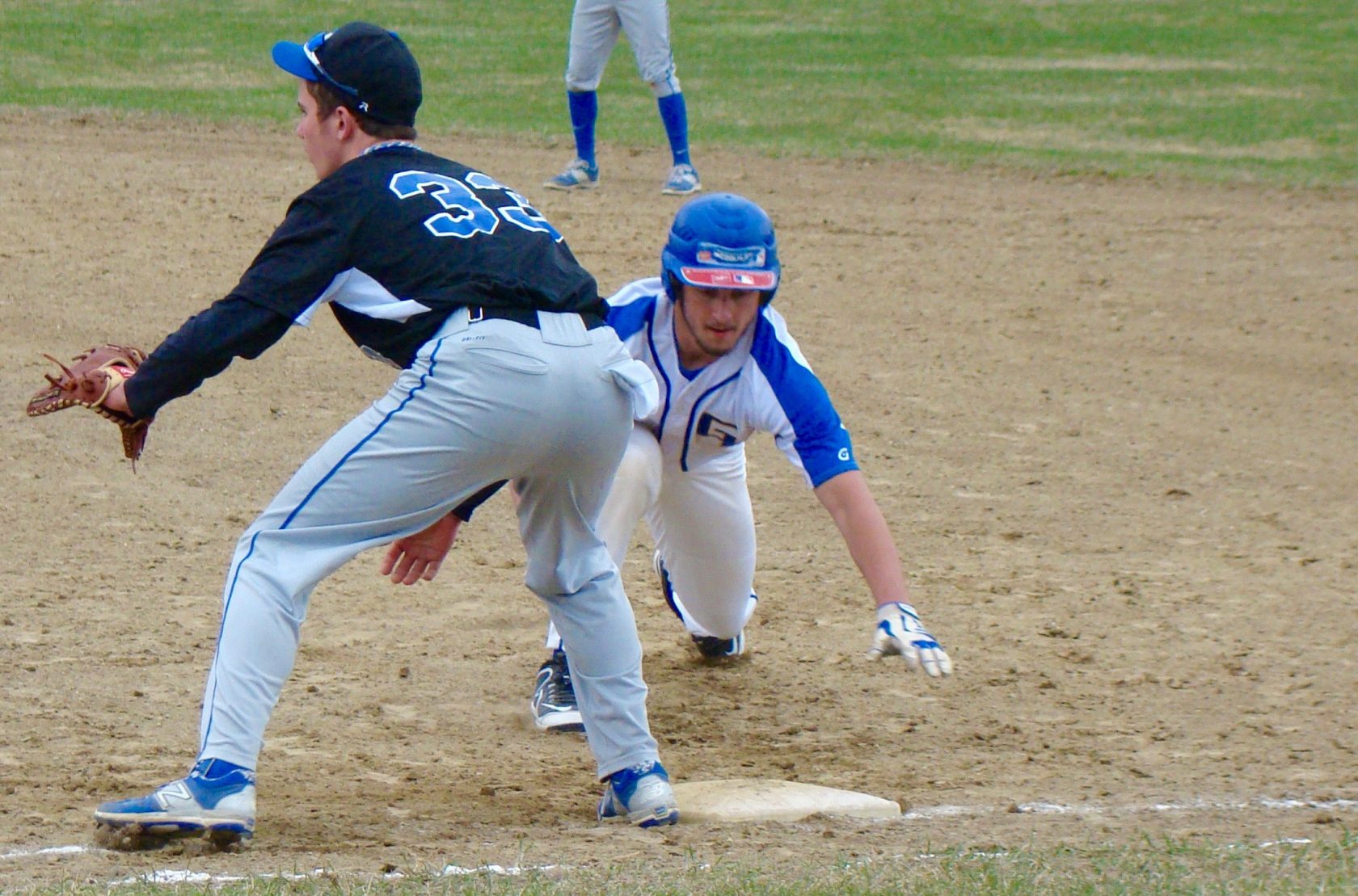 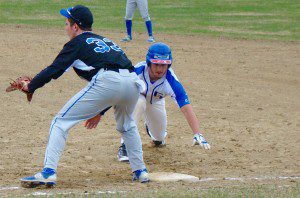 Ethan Gamble slides safely back into the first base bag for Gateway. (Photo by Chris Putz)

HUNTINGTON – Monday’s contest between the Gateway and Monson high school baseball teams was like a roller coaster ride. Unfortunately for the Gators, it didn’t end soon enough.
Gateway rallied from an early deficit, only to fall prey to a late Monson comeback. The Mustangs won 7-4.
Monson jumped out to the game’s first lead with two runs in the first inning. Gateway battled back for three runs in the second inning, and one in the third for a 4-2 advantage. It would not hold. 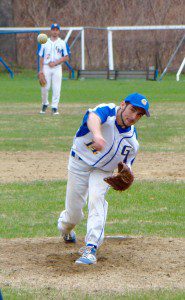 McLean, Bombers blank Taconic
Westfield 4, Taconic 0
Westfield scored three runs in the fourth, and tacked on an insurance run in the sixth to pick up a road victory Monday.
Kenny McLean was the game’s MVP, driving in Shawn Murphy and Chris Sullivan with a double in the fourth, scoring a run in the same inning on a Taconic defensive miscue, plating Craig Lacey (who doubled in the sixth), and pitching seven strong innings.
McLean scattered three hits, struck out seven batters, and walked three.

Beavers rally past WVT
Putnam 5, Westfield Voc-Tech 4
Putnam rallied for three runs in the sixth inning to escape the Whip City with a 5-4 win at Bullens Field.
Carlos Gonzalez (2-for-3, run scored) and Carlos Penalbert (4-for-4, two doubles, run) led the Beavers. 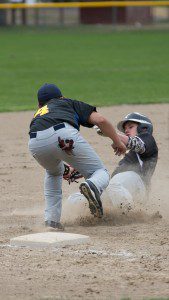 Nate Boulay attempts to avoid the tag while sliding into third against Putnam. (Photo by Liam Sheehan)

Rams edge Gaels
Southwick 2, Holyoke Catholic 1
Southwick jumped out to a 2-0, first-inning lead and held off a late Holyoke Catholic rally.
Nick Kavarakis scattered four hits, struck out five batters and walked two to pick up the victory on the mound for the Rams.
Southwick’s Jake Goodreau (RBI), Bob Hamel (RBI), Kavarkis, Nick Labodycz, Danny McClellan, and Andrew Mitchell each picked up a hit.
Notes: Mitchell struck out seven batters in Saturday’s 11-6 win over Wahconah. In that game, the Rams plated three runs in the fifth and seven runs in the sixth … Vinnie Fortini blasted a sixth-inning triple to provide the team bit of a cushion, and made a diving stab to rob Holyoke Catholic of a hit in the third … Mitchell went 2-for-3 with the go-ahead RBI in the fifth, Hamel had two hits, and Labodycz drove in three runs.