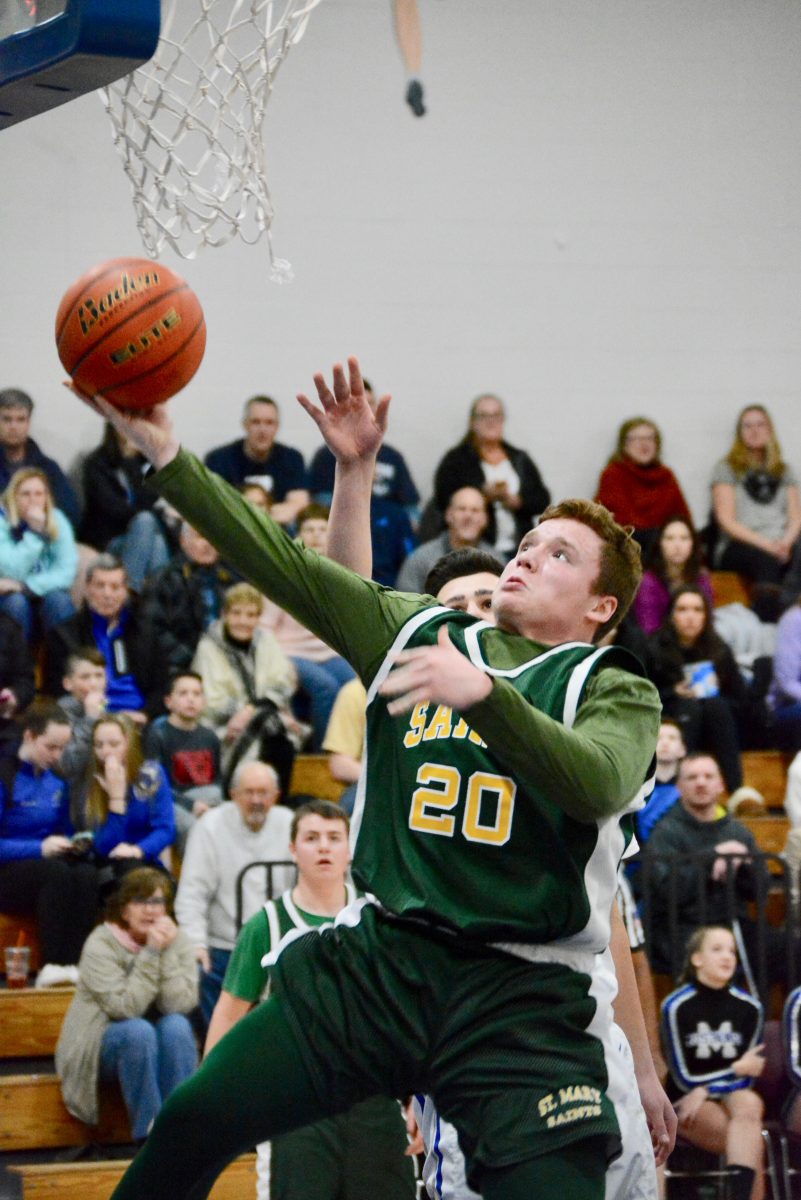 MONSON – For one quarter, No. 12 St. Mary’s scrapped, hustled, fought and clawed their way past fifth-seeded Monson on the road in a first round West Division 4 boys’ basketball tournament game.
St. Mary’s (6-15) surprised Monson (11-10) with a gutsy effort early on, playing with a lot of heart. In the end though, the Saints got worn down and fell 76-30.
“We accomplished our goal of making the tournament,” St. Mary’s coach Joe Molta said. “To make the tournament after four years of struggling, I am pleased.” 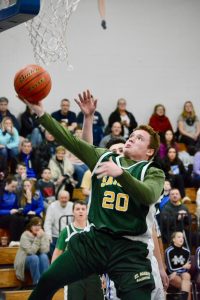 St. Mary’s worked hard for every basket, especially in the first quarter and found themselves trailing only five late in the quarter before Monson drained a 3-pointer in the closing seconds to take a 15-7 lead.
Monson refocused its efforts in the second quarter, and went on a 25-2 run to gain control of the game.
“That was our demise,” coach Molta said. “Their size and athleticism hurt us.”
Monson enjoyed a definitive height differential and it proved to be a huge advantage with multiple second chance opportunities.
St. Mary’s stayed with Monson in the third and fourth quarters but the damage was already done.
“Outside of that quarter, I thought we played as well as we could,” coach Molta said.
Logan Gerry paved the way for Monson with 16 points, 11 of which came in the third quarter. Mustangs’ Chris Sisco and Cam Krotovil finished with 14 and 13 points, respectively.
St. Mary’s 1,000 point scorer Jake Butler scored a game-high 17. Jared Russin had five.

WEST D4 BOYS HOOPS FIRST ROUND
Czeremcha goes beast mode in final game
No. 7 Duggan Academy 62, No. 10 Westfield Technical Academy 41
Westfield Tech senior Andrew Czeremcha delivered a monster effort, making six 3-pointers and finishing with a career high 24 points to go along with 10 rebounds and five blocks.
“Andrew played his final game the way it should be with a lot of fight and all heart,” Westfield Tech coach Kyle Dulude said. “The boys never quit.”
In fact, Westfield Tech outscored Duggan Academy in the third quarter 17-14 and only lost the fourth, 13-10.
“We tried to find little victories in the second half,” coach Dulude said. “We focused on getting a stop or scoring off a time out. As play continued in the second half, it became important for us to just win the (half) for the sake of pride.”
Westfield Tech had no answer for Duggan’s big man, James, who led all scorers with 27 points.
“He was a force in the paint,” Dulude said of the Duggan senior.

WEST D3 BOYS’ HOOPS FIRST ROUND
Rams advance
No. 7 Southwick 49, No. 10 Renaissance 44
Seventh-seeded Southwick took advantage of its home court advantage, turning back Renaissance (9-12) with an opening round victory.
Southwick (15-6) advances to a quarterfinal matchup on the road Friday at second-ranked Easthampton (15-5), which received a first-round bye. Tip-off is at 7 p.m.

STATE D1 GIRLS’ ICE HOCKEY PRELIMINARY
Lancers stunned
No. 17 HPNA 5, No. 16 Longmeadow (WHS Co-Op) 4
HPNA (13-6-2) pulled off a slight upset – at least in terms of seeding – spoiling Longmeadow’s tournament opener at home.
Brigitte Goeler-Slough did all should could to try to keep Longmeadow’s hopes alive, scoring three goals and assisting on another.
The reward for HPNA: a first round matchup against undefeated Shrewsbury (19-0-1).