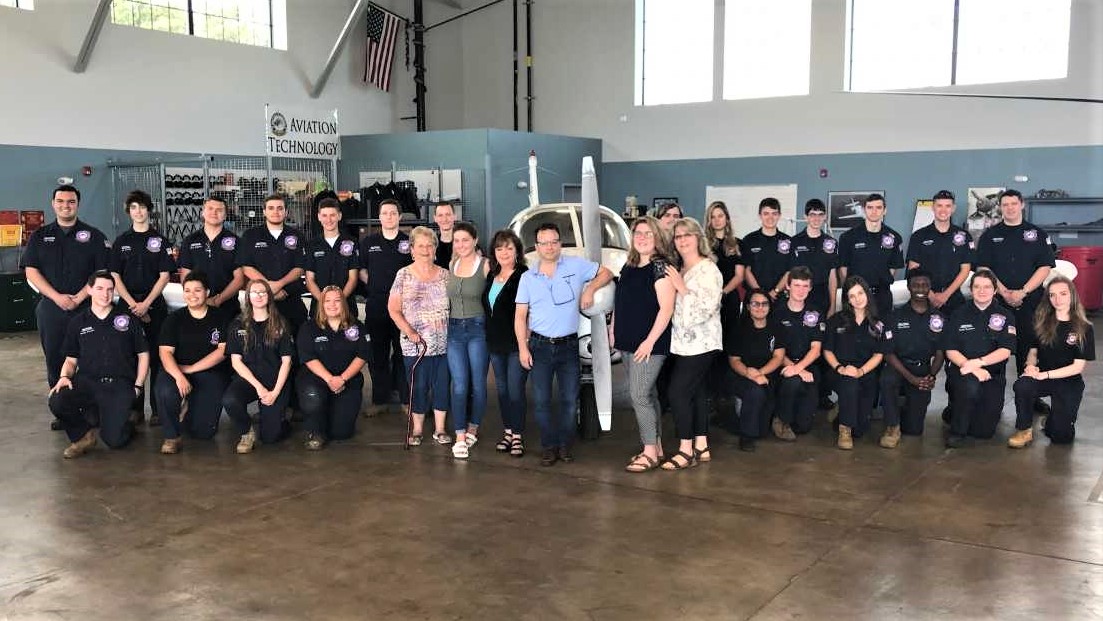 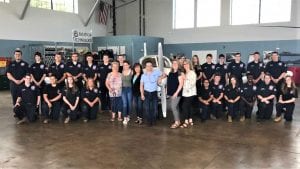 Mrs. Rose Nash (airplane left) and family with her husband Gerald Nash, Sr.’s Piper Cherokee airplane, which she has donated to the Aviation program at Westfield Technical Academy. (Photo submitted)

The value of the donation is in excess of $26K (fair market value), according to Galen Wilson, head of WTA’s aviation program.
The donation was a tribute to Nash’s career in aviation, as described below by his daughter Lory Nash:
Jerry Nash had a life-long love for aviation. He enlisted in the United States Air Force in 1959 at Floyd Bennett Field in Brooklyn, New York. He later transferred his military service to Westover Air Force Base in Chicopee, Massachusetts, and served as Chief Master Sergeant until he retired in 1993.
Nash began working for the Federal Aviation Administration (FAA) in Westfield, Massachusetts, in 1970 as a Principal Aviation Safety Inspector. His FAA career spanned several decades and in 1976, he was promoted to Chief of Airworthiness. In 1983, Nash was again promoted as Manager of The Aircraft Maintenance Branch, Flight Standards Division.
During his employment with the FAA, Nash received many achievement awards and commendations recognizing his hard work and dedication. He was personally requested by Washington Headquarters on several occasions to serve on various committees for re-writing regulations, handbooks and other published material. He retired in 1990 from the FAA.
Upon retiring from the FAA, Nash embarked upon a new career as an aviation consultant. His activities included serving as an expert witness at trials, developing FAA compliance manuals for small and large companies and acting as a consultant for air carriers and repair stations throughout the United States, Canada and Europe.
Nash raised a family of five children. His eldest son, Jerry, Jr. also had a love for aviation and followed in his father’s footsteps. He obtained his Airframe and Powerplant (A&P) license and became an A&P mechanic. He often worked on his dad’s Piper aircraft which was kept at Barnes Airport in Westfield.
Tragically, Jerry, Jr. passed away at an early age, so his father decided to earn his own A&P license so that he could service the Piper aircraft himself. Nash loved flying and working on his airplane and at one point, he upgraded his pilot’s license to a commercial license. He had a passion for sharing his knowledge and was a mentor and coach to many in the aviation industry.
Nash passed away on March 11, 2019, after courageously battling pancreatic cancer. His wife of 64 years, Rose Nash, wants to honor her husband and all the work he did in the aviation community by donating the Piper aircraft to the Westfield Technical Academy Aviation program. It is the family’s hope that this donation will assist current and future Aviation students achieve their goals.
“Mrs. Rose Nash’s donation of the Piper Cherokee aircraft owned by her late husband Gerald Nash to our Aviation program will yield educational benefits for years to come,” said Wilson. He said each waive of students going through the program would work on the Piper for lessons on aircraft servicing, troubleshooting, repair and inspecting.

“We are extremely grateful for this wonderful donation,” Wilson said.