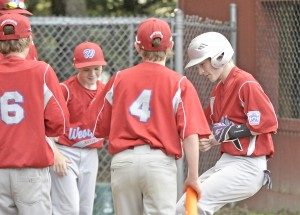 Westfield National’s Ryan Moorhouse, right, is greeted by his teammates after an over-the-fence homerun against visiting Great Barrington. (Photo by Frederick Gore/www.thewestfieldnews.smugmug.com)

WESTFIELD – Westfield National went back … back … way back to beat their first round opponent in the Little League Baseball Majors state sectionals.
In one of the most historic nights, locally, for Little League, Westfield National clubbed back-to-back-to-back homers to rout Great Barrington 11-3 Wednesday night at Paper Mill Field. The Nationals finished with five homers on the night.
“We know we have big home run hitters … (but) it was crazy, amazing,” said Nationals’ Ryan Moorehouse, who hit the second of his team’s three consecutive homers in the second inning.
Moorehouse later added a second dinger, his third of the postseason.
Jack Masciadrelli got the long ball party started with a three-run home run in the top of the second inning, scoring Walter Figueroa, who singled, and C.J. Skribiski, who was hit by a pitch in consecutive at-bats.
“(Great Barrington pitcher Graham Herrick) pitched it high and out,” Masciadrelli explained of the 2-ball, 2-strike pitch. “I stepped into it and brought it to opposite field.”
Moorehouse and Mike Hall followed with solo shots.
“We got runs early and worked the pitch counts,” Masciadrelli said. “It’s nice because I started it, and it kept going.”
Westfield National starter Kevin Palluck mowed down the opposition early, striking out the side to begin the game. He retired the first six batters before allowing a bases-loaded walk in the third. A second run scored on an error.
“I didn’t want to get (Great Barrington) pumped up – they probably would have hit me more,” Palluck said of his strong start. “I had to throw strikes. I kept pumping the zone so they probably wouldn’t hit me.”
Palluck got a little more help from Moorehouse who crushed a two-run homer over the right field fence in the fourth inning. Mason Collingwood also drove one deep for an 8-2 lead.
Great Barrington tacked on its only other run in the fourth on a bases-loaded walk. That run was also unearned.
Moorehouse, who opened as the catcher and briefly moved to third defensively, closed out the final 2 1-3 innings. He allowed no hits, struck out three batters and walked one.
Westfield National put three more runs on the board in the sixth. Masciadrelli singled, Moorehouse doubled, and both runners advanced on a wild pitch. Hall belted an RBI double out along the right field line. Collingwood walked. With one out, Jack Lamirande and Ethan Flaherty hit run-scoring singles.
“A team maybe hits one or two home runs a game,” Westfield National manager Bill Lamirande said, “but in three at-bats and to add two later on is pretty impressive.”
Still Lamirande cautioned against the ego-building blasts.
“Hitting is not reciprocal as pitching and defense,” he added. “Hitting can come and go. It’s not going to take us farther than pitching and defense is going to.”
Westfield National has a full stable of pitchers armed and ready to defend their home turf when they return to action Thursday against Pittsfield South at Cross Street Field at 5:30 p.m.
“This is fun baseball,” Lamirande said.