WESTFIELD – It’s official – Wednesday, July 12 will be a night of All-Stars for the entire Whip City.
On Monday, the Westfield National 12-Year-Old All-Stars rallied from a one-run deficit with a 10-run, fourth-inning outburst to mercy Amherst 12-2 in a District 2 tournament semifinal game at Paper Mill Field.
The victory sets up an all-Westfield final – National (7-1) vs. American (5-2) – Wednesday night at Ralph E. Sanville Field on Cross Street at 6 p.m.
“It was a really good win,” Westfield National manager Shane Collins said.
Collins admitted that the young Nats were looking ahead to the potential rematch well before the end of Monday’s contest. 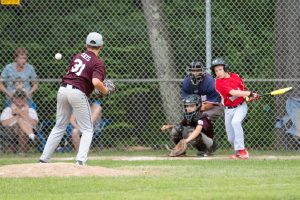 Westfield Nat’s hit parade featured hits like this screamer by Everett Stec up the middle past the Amherst pitcher. (Photo by Bill Deren)

“I asked our kids in the dugout after the game how many of them were looking forward to the rematch and playing the Americans during the game (against Amherst),” Collins said. “All the kids raised their hands.”
Westfield’s bench took its game to the next level against Amherst.
Trailing 2-1, Everett Stec, Jacob Mello, Jesse Paroline, and Nick Goodwin came off the bench to deliver consecutive base hits. Paroline’s base knock tied the game 2-all. Several hits later in the inning, Ryder Pieczarka uncorked a grand slam.
Cody Collins hit a solo home run, his sixth dinger of the postseason.
Pieczarka and Mason Pereira combined to shut down Amherst’s offensive attack, limiting the opposition to two runs (one earned) and piling up eight Ks.

SOFTBALL
Westfield 10-Year-Old All-Stars 4, Easthampton 2
Marleigh Monroe continued her sterling effort on the mound for Westfield (2-0). Monroe struck out 10 Easthampton batters Monday to bring her two-game total to 21 Ks.
Westfield was coming off a 14-0, mercy-shortened drubbing of Easthampton in Game 1 of the best-of-five sectional series.
Westfield shortstop Kelsey Bouchard set the tone for Westfield in the opener, making a play from her knees and throwing the ball to first base for the first out.
Westfield will attempt to close out the best-of-5 series Wednesday night at home. First pitch is slated for Sadie Knox at 7.

Easthampton 11-Year-Olds 11, Westfield 1
Easthampton evened up the best-of-5 series with a convincing victory Monday night at Sadie Knox Field.
Lexi Sanchez manufactured Easthampton’s only run of the game with a bunt single and two stolen bases. Kara Dougherty made a fantastic grab in the outfield, Jalyn Almeida made a diving catch at first base, and pitcher Megan Cichonski pitched well.
The two teams will meet again Wednesday at Easthampton at 6 p.m.

Westfield Juniors 12, Charlton 3
Westfield raced out to a 4-0 lead in the first inning and never looked back. The Whip City’s Junior All-Star team advanced to the sectional championship Wednesday at a site and time to be determined.