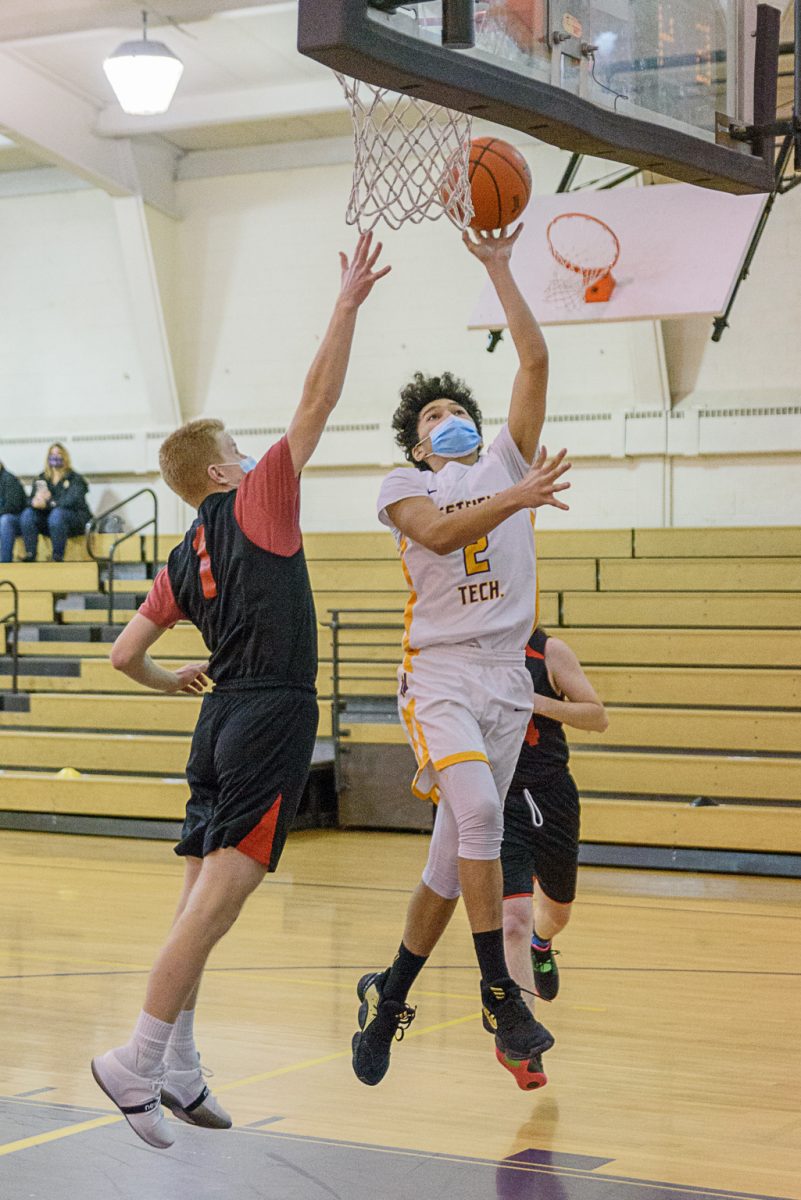 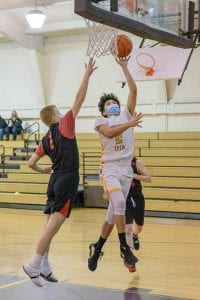 WESTFIELD – It may have only been Day One of the Covid-shortened and oft-delayed 2021 high school sports winter sports season, but the Westfield Technical Academy High School boys basketball team already appeared to be in midseason form.
Westfield Tech picked up right up where it left off last season, running and gunning past visiting Pioneer Valley Chinese Immersion Charter on opening night Friday. The Tigers scored the game’s first 10 points, opening with a 20-1 run, en route to posting a convincing 60-24 victory.
“I really feel like the continuation from last year is what you saw today – – the fast start, the style of play,” Westfield Technical Academy head coach Kyle Dulude said. “It’s really a continuation from one season to the next without a doubt. I think that’s why we were ready to go out of the gates.”
Westfield Technical Academy junior guard Andrew Navarro helped spark the first quarter run with a 10-point outburst. Navarro’s 3-pointer midway through the quarter made it 14-1. The Tigers led 23-3 at the end of the opening quarter.
Navarro said “our team playing, working together, keeping the ball moving and working as a team, not focusing on ourselves, and being a team player” was the difference in the two teams on the court.
Navarro also could not miss from the outside in the third quarter, draining three 3’s. He finished with a game-high 24 points.
Josh Sturmer and Brody Zabielski finished with 11 and 10 points, respectively, for Westfield Technical Academy.
“We wanted to get off to a fast start and we did,” Zabielski said. “The whole COVID thing sucks wearing the mask and everything but we did the best we could do I think, and we are going to get better from here.”
PVCIC’s Hunter Palm scored a team-high nine points.

BOYS ICE HOCKEY
Six different Bombers score in opening night victory
Westfield 7, Agawam 1
Westfield received goals from six different goal scorers and cruised past Agawam in a high school boys ice hockey season opener Friday night at Amelia Park Ice Arena.
Matt Kotfila had two goals and one assist, Ethan Clarke had one goal and three assists, Connor Fitzgerald had one goal and two assists, Brandon Shuman and Joe Taupier each had one goal and one assist and Tyler Kutt had a goal.
Mike Antonellis and Kevin Hosmer each had an assist.
“The kids played well,” Westfield High School boys ice hockey first-year head coach David Pelletier said. “It was a total team effort.”
Each line scored a goal, including the defense.
Westfield goalie C.J. Czarnecki was solid, making his season debut in net for the Bombers. “He made plenty of big (saves) when we needed it,” coach Pelletier said.

LATE RESULTS
Thurs. Jan. 21
BOYS SWIMMING
Bombers nip Brownies
Westfield 77, Agawam 76
Jaden Noel, Anton Bonacci, and Zachary Ellis won two events apiece for Westfield, and the Bombers held off the Brownies in a high school swim opener at Westfield State University’s Ely Pool.’
Ellis won the 50 free (23.99) and 100 free (55.60), Bonacci finished first in the 200 IM (2:14.58) and 100 breaststroke (1:09.06), and Noel secured gold in the 100 butterfly (58.03) and 100 backstroke (59.21).
“Jaden Noel, Anton Bonacci, and freshman Zachary Ellis had great meets,” Westfield High School swimming and diving coach Tom Lewis said. “Everyone had solid meets, but those three had particularly good meets.”
Noel, Bonacci, and Ellis also teamed up with Mark Ionkin to win the 200 medley relay (1:48.75).
“It was a little weird swimming in a virtual scenario where we swim in our pool and Agawam swims in their pool and then we have to mesh the scores together,” coach Lewis said, “but that’s the way it is I guess.”