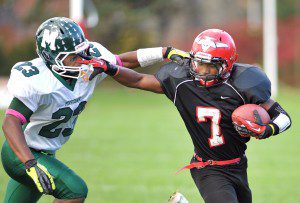 WESTFIELD – Westfield sophomore kicker Cody Neidig made a 20-yard field goal in a 51-14 romp over Agawam two weeks ago. On Saturday, with the stakes much bigger, Neidig kicked a game-winning 21-yarder as time expired to help the Bombers stun the high-flying Minnechaug Falcons 33-30 at Bullens Field.
“It’s a point-one percent chance that this would have happened to me,” Neidig said, moments after booting a floater through the uprights. “I looked at my target, took my steps, and kicked the ball.”
The Bombers (2-5) stormed the field in celebration. The Falcons fell to 5-2.
Neidig’s kick was the result of a 12-play, 68-yard drive that ate up the final 4 minutes, 17 seconds of regulation. Minnechaug had a chance to take the lead on its final possession but came up short on fourth-and-27 from the Westfield 33. Defensive back Rashaun Rivers tipped away the Falcons’ final pass as several Bombers converged on the intended receiver.
“We’ve been fighting all year,” said Westfield senior half back John Toomey, who ran for 91 yards and two touchdowns on 10 carries. “We’ve had some tough breaks, we’ve been blown out a few times, and we had a blowout win at Agawam. It’s been a weird season. But this victory is nice. We couldn’t ask for more.”
After winning the coin toss, Westfield opened the game with a 6-play, 80-yard drive, and scored on Toomey’s first touchdown with 8:33 remaining in the first quarter. Toomey burst through the defensive line and rumbled 43 yards for the score. The two-point attempt failed.
Westfield’s defense matched the offense’s intensity early and often. Rivers made one of several key plays, breaking up a third-down pass to force a three-and-out.
Westfield’s next series was another highly successful effort. The Bombers drove 75 yards in 12 plays, culminating in Rivers’ 11-yard TD run. Rivers, who made his impact felt on offense, defense, and special teams Saturday, bounced outside on the carry and juked a defensive player before crossing the goal line.
It was a nearly flawless first quarter for the Bombers.
Westfield dominated time of possession in the first quarter, holding the ball for nearly 10-and-a-half minutes to 1:30 for Minnechaug. The Bombers had five first downs to none, and no turnovers.
The only negative for Westfield in the first quarter was two penalties that it managed to shake off.
Minnechaug stormed back in a big, big way. The Falcons scored two touchdowns in a four-and-a-half minute span.
On its first possession of the second quarter, Minnechaug took advantage of a long special teams return. The Falcons began the drive on Westfield’s 15 and needed just three plays before scoring on sophomore Ben Sheehan’s 7-yard effort with 10:30 left before the half.
Westfield went three-and-out on its next series. Minnechaug scored on its ensuing possession, finally punching the ball in from five yards out on senior quarterback Kevin White’s touchdown run with 6:03 on the clock.
Westfield settled down on its next drive, moving the ball 62 yards – all on the ground – before scoring on a 15-yard halfback toss from Quinn Barbeito to junior tight end Garrett Fitzgerald, who caught the ball in stride in the corner of the end zone. The score and successful 2-point attempt gave the Bombers a 22-16 lead at the 2:13 mark.
Minnechaug threatened in the waning seconds, but Toomey, this time on defense, intercepted a pass and returned it nearly 50 yards to the Falcons’ own 20. The Bombers could not convert.
Westfield’s defense came out fired up to begin the second half.
After allowing a 14-yard run on Minnechaug’s second play from the line of scrimmage, the Bombers shut down the Falcons and forced a punt.
Rivers returned the punt 50-plus yards to set Westfield up from the Minnechaug 19. Three plays later, Toomey scored on a 5-yard TD run with 8:05 remaining in the quarter. The Bombers, after converting another 2-point try, led 30-16.
Minnechaug responded.
The Falcons began from their own 35 and nine plays later scored on Sheehan’s eight-yard run. The two-point conversion failed, leaving the Bombers leading, 30-22.
Minnechaug’s defense silenced Westfield on two consecutive series. Then its offense swooped in to save the day as the Falcons completed a seven-play, 65-yard drive with a 10-yard touchdown pass from White to Tim Spafford with 6:16 remaining.
The rest is history as Westfield’s defense clamped down, its offense drove the length of the field, and Neidig dug down deep to boot the Falcons.
“Our offensive line did it all,” said Westfield junior quarterback Jake Toomey, who often handed off the ball to his brother, John. “We just ran the ball right up the middle.”
Westfield coach Bill Moore declined to comment on the victory, deferring to his players who earned a well-deserved ‘W”.