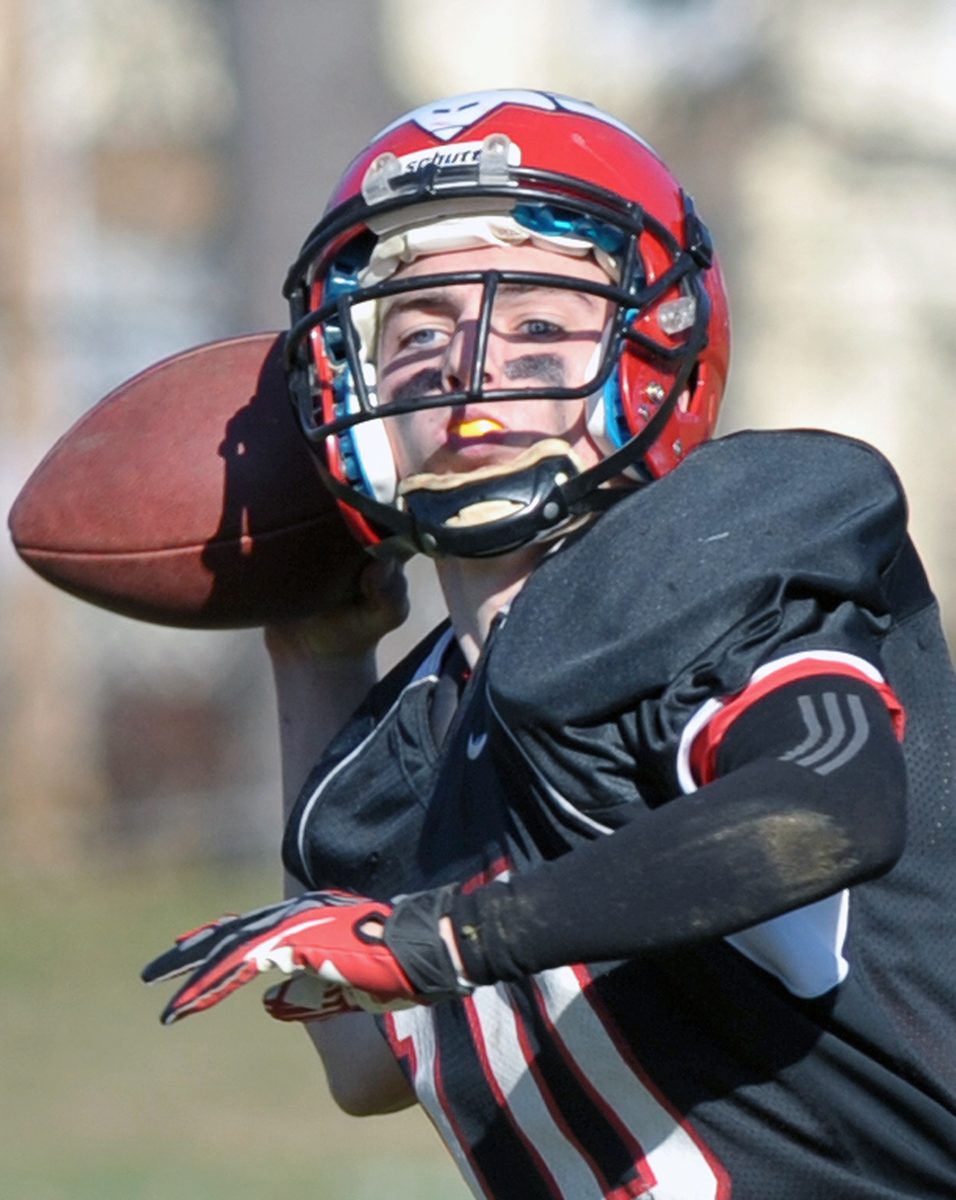 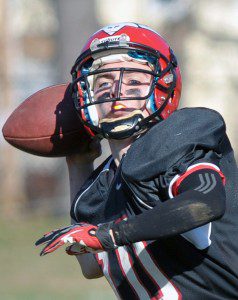 Westfield junior quarterback Jake Toomey drops back to pass against Cathedral on Thanksgiving Day. Toomey, who will return along with several other players, will have a chance to play in the new state playoff format in 2013. (Photo by chief photographer Frederick Gore)

WESTFIELD – The Westfield High School football team may have fallen short of their goals for a postseason appearance, but if a return trip is in the near future it will feature a much different look.
Late last month, the MIAA Committee passed a new state football playoff proposal which alters the postseason landscape dramatically.
First and foremost, there will be a true state champion now in six different divisions compared to the current system which crowns 18 different champs in Massachusetts. Secondly, teams will not have to play three games in 10 days as is currently the case (Thanksgiving Day, semifinals, finals). Two divisions and Tuesday night semis have been eliminated.
The regular season will consist of seven weeks and begin the weekend of Sept. 13-14, 2013. In Division II, which Westfield will play out of, the sectional semifinals will begin in Week 9, followed by the sectional finals and state semifinals in successive weeks. The traditional Thanksgiving Day game, which featured another dominating performance from the Bombers, will remain in place for November 28.
“There was a strong concern about maintaining the Thanksgiving games, and we do,” said MIAA spokesperson Paul Wetzel.
Said Westfield coach Bill Moore: “People in Westfield want to keep (the Thanksgiving Day game) for the tradition. It means a lot to people going back. Cathedral has had some rough years lately but we’ve had some close games a few times.”
The state finals will be held for all teams in Week 13 (December 7, 2013).
The remaining games for non-postseason teams will be determined by a scheduling committee.
In addition to Westfield, Division II will include Western Massachusetts teams Central, Longmeadow, East Longmeadow, Minnechaug, Holyoke, and possibly West Springfield and Putnam.
“I think it’s a good thing for Westfield, and football in Western Mass and the state,” said Westfield coach Bill Moore, who recently announced his plans to coach out the final year of his contract before leaving the program at the end of the 2013 season.
“Every high school team in the state gets to play for a real state championship now,” Moore said. “That’s exciting. That’s a great thing to promote football.” 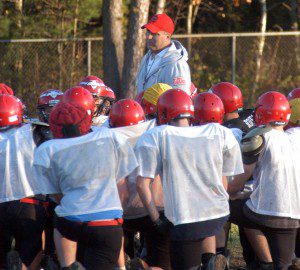 Westfield head coach Bill Moore speaks to his team at a practice leading up to this past season’s Thanksgiving Day game. Moore, who is expected to leave the program after the 2013 season, will help guide the team to another Super Bowl under the MIAA’s new postseason format. (Photo by Chris Putz)

Moore said the new playoff format could revive interest in the sport in the Whip City as numbers have declined over the last several years. The Bombers last played in a Super Bowl in 2008, finishing as runners-up for the second straight year.
“It could be like when the Patriots got there,” said Moore, referring to the spike in the program’s numbers in the years after New England won Super Bowl championships. “Football is a lot of hard work. Are the kids willing to do it? The players need to be in the weight room, at camps – it’s a big commitment.”
There is also heightened awareness about concussions, which some believe, has deterred parents from allowing their children to play football.
Westfield , and several schools throughout the state, and the country, for that matter, have adopted policies, some mandatory, to keep ensure the safety of players who suffer concussions or experience concussion-like symptoms. The school’s athletic director Karen Gomez, continues to work with trainer Jim Daino to monitor the health of football players and athletes of all the other sports at WHS.
Notes: All six planned high school football championships are expected to be played at Gillette Stadium during the two-year pilot program, beginning in 2013. A rotating schedule currently keeps teams from from playing at Foxboro in successive years. …The new state championship playoff proposal, which has been tossed about for the last 6-7 years, was approved 161-131 at a special assembly meeting Oct. 26. …Moore said that although the program’s numbers have declined and it will be tough to replace the current senior class, the varsity team has “some very good football players coming back.”