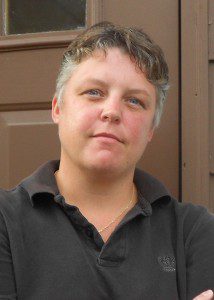 RUSSELL – At the Russell Board of Selectmen meeting last night, Jen Dubiel’s recent appointment as the new Russell Police Chief was discussed.
Dubiel was appointed at a Board of Selectmen meeting on July 10, after being interviewed by the Selectmen present at the meeting, Jason Boyer and Pandora Hague.  Dubiel, who has served the town of Russell for three years, most recently as sergeant, replaces retiring Chief Tom Mulligan, who served eleven years on the force.  At last night’s meeting, it was announced that Dubiel’s new part-time hours in Russell will be on Tuesdays and Thursdays from 10 a.m. to 3 p.m. in the Town Hall, or by appointment.
Dubiel, 37, grew up in Russell and graduated from Gateway Regional High School. She currently lives in Westfield. Dubiel is a graduate of the Special State Police Academy, and is studying criminal justice at Holyoke Community College. She has been a full-time member of the Mount Holyoke College campus police for four years, a position she still holds. Dubiel is the only woman serving as chief of police in the southern hilltowns.
“Community policing is a huge deal,” Dubiel said of her appointment.  “I can’t run the town with a three-person department without the residents’ support.  For years now, we have relied on the Russell Barracks State Police to respond to our calls. I’m trying to change that. That’s my goal.”
Dubiel’s appointment was not without controversy, however. During last night’s meeting, Keith Cortis, chairman of the Board of Selectmen, read a letter to the Selectmen regarding the appointment of the new police chief. The writer, who was not identified, stated that he or she had attended the July 24 Selectmen’s meeting at which time the appointment was supposed to be discussed, only to find that a decision had already been made.
Other comments in the letter referenced the in-town only job posting, as well as the time frame. Applications for the position were due by July 9, and the decision was made on July 10. The writer questioned whether the selectmen had ample time to review resumes in order to make a thoughtful decision.  A question was also raised as to whether the decision should have been made with only two of the three selectmen present.
Cortis apologized for being the one person who wasn’t at the meeting due to health reasons. He said that town business may be conducted with two members present.
Cortis also said that the search this time was a little different, because in the past, they had no police pool from which to choose.  He also said that the outgoing police chief had expressed his desires for the outcome of the search.
Pandora Hague, one of the two Selectmen who appointed Dubiel, said she was impressed by the time that Dubiel had put into a plan for the town of Russell.
“I believe we appointed the best person for the position,” Hague said.
“When I made my decision, it was based partly on attending all the Select Board meetings for the last year,” said Jason Boyer, the other member present at the July 10 meeting. “Chief Mulligan worked closely with Jen. Jen was working on what we can do to make the police a bigger presence in this community.  I feel Jen was the best person for the position.”
A question was raised as to whether a new procedure and job descriptions should be set up, a lack of which were raised in the letter regarding the selection process of the police chief.
“The unfortunate thing is we’ve had a complete turnover of all the experienced people in town,” said Cortis. “I’ve been on two years, and I’m a senior person. I think policies and procedures should be put in place.”
“We’re working on it,” said Hague. “But there’s a lot to be done.”
Following the meeting, Loretta Godfrey, the wife of one of the other applicants, spoke to reporters.
“There was no real fairness to the people who were qualified.” Godfrey said.
Her husband, John “Jack” Godfrey, a twenty-five year veteran of the State Police, did not receive an interview. Neither did the other applicant, a twenty-year active-duty member of the Easthampton police force who lives in Russell, according to Godfrey.  The Godfreys reside in Montgomery.