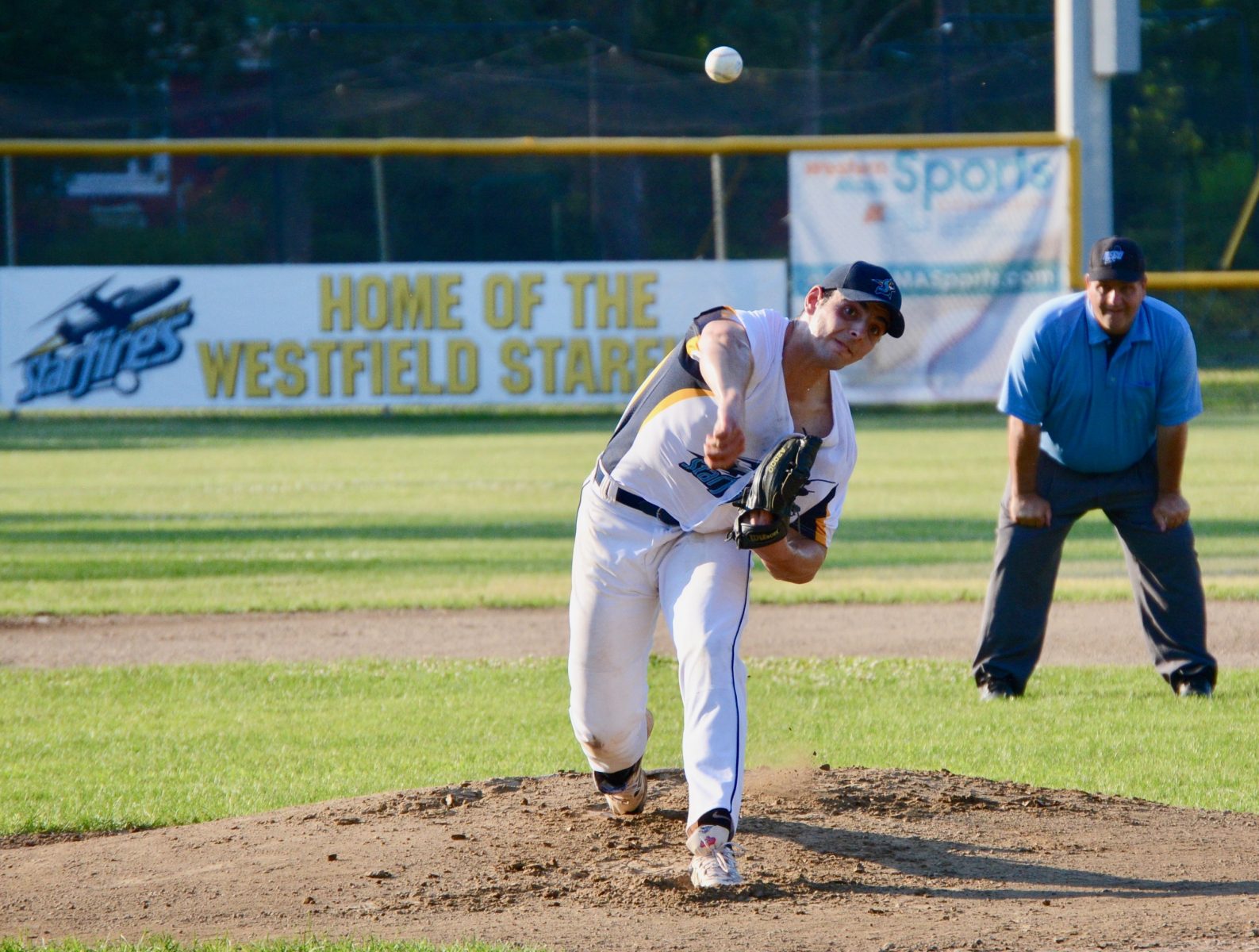 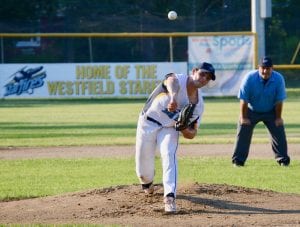 Westfield Starfires pitcher Jack Fox follows through with a pitch against the Brockton Rox Wednesday night at Bullens Field. (Photo by Chris Putz)

WESTFIELD – Wednesday night’s matchup between the Westfield Starfires and the Brockton Rox ended in favor of the Starfires, a thrilling 4–3 walk off victory.
The game began like any other.
Westfield had three hits in the first inning, all of them singles, which helped bring an early run in for the Starfires. Center fielder Danny Crossen crossed home plate after a sacrifice fly off of the bat of left fielder Thomas Joyce.
Brockton was unable to get a run back and the Starfires upped their lead to two in the fourth inning and would remain in the lead until the sixth.
The bats came alive for Brockton that inning with four hits and a total of three runs scored to take the lead away from the Starfires.
As the Westfield Starfires have proven before, they are incredibly capable of making magic happen in the ninth inning. After giving up a two-run lead, the Starfires made it clear that they were not done.
With two outs in the ninth, Westfield needed a pair of runs to leave Bullens Field victorious. Starfires catcher Angelo D’Acunto answered the call with a hard hit to center field that would land him at third base.
Crossen made his way up to the plate next and D’Acunto would score on a wild pitch to tie the game at 3-3. The inning continued when Crossen singled to put himself on base and would then steal second with right fielder Devin Kellogg up to bat.
The next series of events was the Bullens Field magic that the Starfires were waiting for all game. An error by Brockton’s catcher allowed Crossen to advance to third base, and another one would cost the Rox the game and give the Starfires a walk-off win. A massive celebration ensued as Westfield players ran onto the field to bask in the glory.
D’Acunto, who tied the game for the Starfires, said that all he wanted to do was keep the game alive when he stepped up to the plate.
“I was just thinking about driving a ball to keep my team in it regardless if it was a home run, single, walk or getting hit by a pitch,” D’Acunto said. “I just needed to get on base to keep the inning going and put pressure on the other team.”
Starfires coaching staff knew that the Brockton catcher was having trouble keeping the ball in front and D’Acunto was ready to sprint home if a passed ball situation were to occur.
“Coach Sandillo was telling me the whole time to watch him [the catcher] because he was a little iffy stopping balls,” D’Acunto said. “So I knew that if I was given the chance I was going to score. I knew that we weren’t losing this game and I knew we were going to walk it off.”
The catcher mentioned that the keys to the win were deliberate batting and maintaining a positive mentality throughout the matchup.
“Having quality at-bats was a huge thing” D’Acunto said “And we were just having fun with it. I think we do that every day and we try to be the best players that we can be.”
With a win back on Bullens Field, the Starfires hope to bring that energy into Friday’s double header and keep the victories rolling. – Courtesy of Audrey Gamble/Westfield Starfires