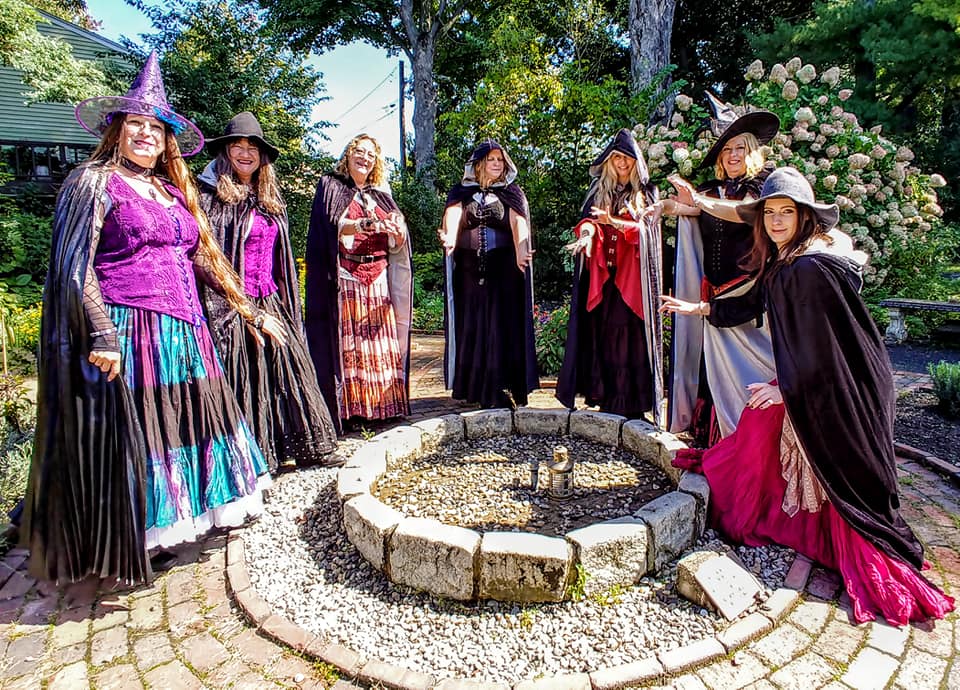 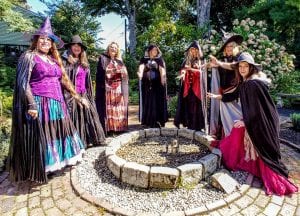 The Whip City Witches, in full costume, have a number of upcoming performances in the area. (Photo submitted)

WESTFIELD – It’s the time of year when witches begin to fly, and the Whip City Witches are getting ready.

Members of the dance troupe have been adding bling to their brooms and perfecting their moves as they prepare for area festivals in the coming weeks.

And while it’s the Season of the Witch, this group pf local women take their craft seriously all year long.

Whip City Witches is a group of nine women who bring their witchy-style dance ensemble to local fairs, festivals and fundraisers.

Founding members Lori McElhiney and Cindy Pendleton lead the group, which includes women from all backgrounds – yes, some of whom are Wiccan – who enjoy performing.

The group members choreograph their dances, select their music and create their costumes. Part witch, part gypsy; they all love to dance.

“This is our fourth season,” McElhiney said last week during a rehearsal of the WCW’s latest dances. “A few of us were in a women’s group together. We would meet for dinner and talk and one day someone showed us a video of women performing a broom dance,” she said.

“I was a belly dancer and some of the women asked me to teach them and we started practicing for fun and performed for the first time at the Granville Harvest Fair four years ago,” McElhiney said. “After that, it just blew up!” 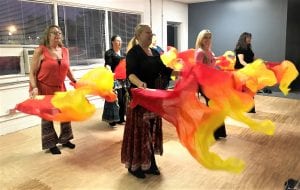 The WCW have performed at the Granville Harvest Fair annually and will showcase four new dances there this year Oct. 13 at noon and 2 p.m.

In addition to the new dances, the witches will perform two different sets with costume changes.

WCW rehearse weekly throughout the year and work up a sweat each week.

Pendleton said when they started out, most of the women did not know one another but have formed a sisterhood.

They spend time together practicing every Thursday and perform on weekends. While they are still called Whip City Witches, they have toned down some of the stereotypical witchiness.

“Some of us took on personas early on,” McElhiney said. “That’s kind of gone away, but Cindy is ‘Fire’.”

Their costumes have changed a bit, going from what one member called “over the top” to more subtle. There is some uniformity – matching cloaks, for instance – but each witch has a unique style that adds to the magic of the group.

During rehearsal Thursday night, the women practiced one of the new dances and used red, orange and yellow fabric flags to mimic mesmerizing flames as they moved across the floor.

McElhiney said they are excited to showcase their new routines and are available to perform year-round.

In addition to the Granville Harvest Fair, Whip City Witches will perform at the Scooptacular at the Gran-Val Scoop in Granville Oct. 19 at 1:30 and 3:30 p.m., the Joy of Jasper Halloween costume party Oct. 27 at the Holyoke Elks to benefit a local horse farm, and Rock Bellies Nov. 10 at 2 p.m. at the American Legion Post 275 in Chicopee.

More information on WCW is available on its Facebook page.