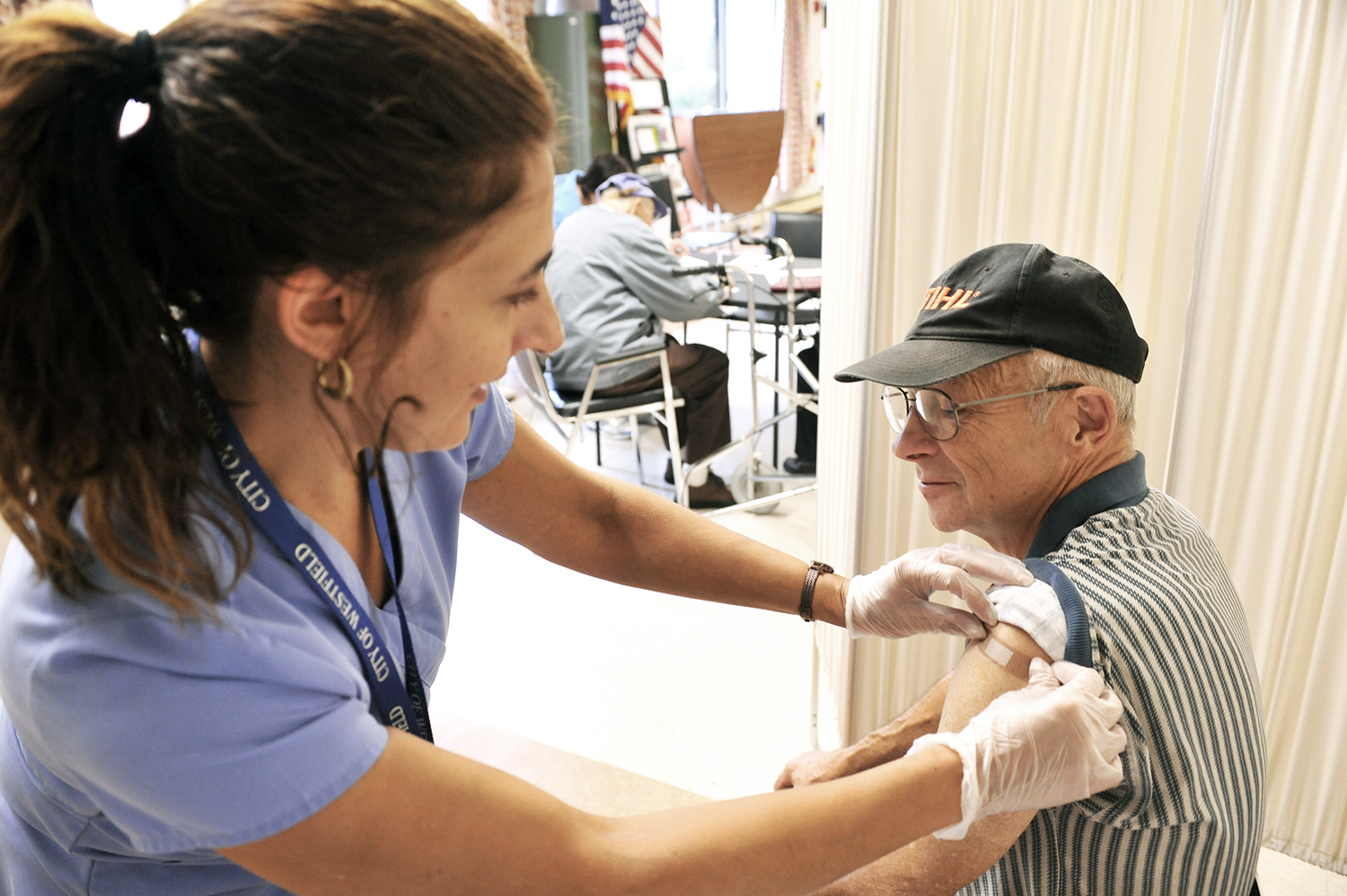 WESTFIELD – Noble Hospital will be giving flu shots to adults over the age 18 on Tuesday, October 28. A donation of $5 per shot is suggested, with all donations going to benefit Noble Hospital’s Patient Transportation Service.
The service provides free transportation to patients requiring a ride to and from surgery, procedures, and tests. Shots will be administered in the front lobby of the hospital from 9-11 a.m., 1-3 p.m., and 5-7 p.m.
Shots will be given by nursing staff and preregistration is not required.
Regarding the Patient Transportation Service, Meg Morrill, Noble’s community development coordinator, said the hospital is looking to continue offering this increasingly popular service to patients and has even expanded service to more rural communities in greater Westfield.
“The service is free, but there still is an expense to do it,” said Morrill . “People have really been taking advantage of it and taking us up on the offer and really using it.”
Due to Westfield’s large elderly population, Morrill is glad that the transportation service has taken off like it has.
“Because we do have so many elderly people and people who might not have a ride otherwise, it’s a great service for the community,” she said, adding that the Patient Transportation Service utilizes only one bus to transport patients to and from the hospital.
The service operates between 5 a.m. and 5 p.m. Monday-Friday and patients must coordinate services with the hospital by dialing (413)572-6030 between the hours of 8:30 a.m. and 3:00 p.m. two days prior to the scheduled visit.
Patients must supply the hospital with name, ddress, phone number, procedure type and date of the procedure and time of appointment.
Along with the city of Westfield, the Patient Transportation Service also visits the surrounding cities and towns of Agawam, Southwick, West Springfield, Russell and Granville.
Other area institutions holding flu shot events include The Soldiers’ Home in Holyoke, holding a flu vaccine clinic for veterans tomorrow from 9 a.m. to 2 p.m. at the facility’s outpatient clinic at 110 Cherry St in Holyoke.
Spouses accompanying veterans will also be able to obtain vaccinations under the same payment criteria. People covered under Medicare Part B can obtain vaccinations for free. Some health insurance companies also pay for such vaccinations and those who do not have such coverage will be charged $30 for flu shots.
Potential attendees are advised to check with their insurance carriers for eligibility, as some carriers do not pay for the vaccines.
Insurance cards must be presented at the clinic.
According to a release from The Soldiers’ Home, it takes 10 days for a person who has been vaccinated to develop effective resistance against the flu, which resulted in 381,000 hospitalizations across the nation last year, according to a December report from the Centers for Disease Control (CDC), though in 2013, more than 6.6 million illnesses were prevented in the 2013 flu season due to the flu vaccine.
Flu season in New England typically begins in November, increases in January, and peaks in February or early March and that despite the benefits of vaccination and the potential severity of the flu, the federal Centers for Disease Control and Prevention reports that fewer than half of all Americans receive the vaccination in a typical flu season.
While a yearly flu immunization is recommended for everyone over age six months, fewer than half of Americans received a flu shot last year, according to the federal Centers for Disease Control and Prevention.
Massachusetts has the fourth highest flu vaccination rate in the country at 53 percent during last year’s season compared to a national average of 46 percent, a drop from 58 percent of state residents during the 2012-2013 season.
Seniors are among those most affected by the flu every year, which is why Tina Gorman, executive director of Westfield’s Council On Aging, had already organized two flu vaccine sessions this month, on October 2 and 7.
“We were full, full, full. We had advance signups and we usually try to get them the beginning of October,” she said, adding that Debra Mulvenna and Joe Rouse of the city’s Health Department helped out with the event. “We had 80 people sign up, four time slots. It was no charge to them, they just had to bring their insurance cards.”
Gorman stated that while there isn’t another clinic scheduled for this fall, seniors who still wish to get a flu shot have a limited window of opportunity.
“Deb said that she still has some (flu shots), so if there are seniors who need one, they could call the Health Department,” said Gorman.
“Right now, we’re still trying to decide whether we’re going to do another clinic as we’re limited in the supply that we have. We only have about 50 doses right now,” said Joe Rouse, director of public health for the city of Westfield. “We could assess what the need is going to be in a couple of weeks.
“We used to do (flu shot clinics) at the Boys & Girls Club, but they started doing it here last year and it’s really worked out well,” Gorman said. “The talk around here is that a lot of seniors got or are getting a flu shot, either here or they’d already gotten it or were getting it through their doctor.”
Gorman said that there had been limited vaccinations in recent years but now that more pharmacies and supermarkets are offering the shots, more people are taking advantage.
“I think they’re more available. People have more options about where they can get their flu shots this year.” she said.
“It seems to be readily available, but if we start to hear that doctors and pharmacies are running out, we might order a little bit more and do one more clinic for the general public,” Rouse said.