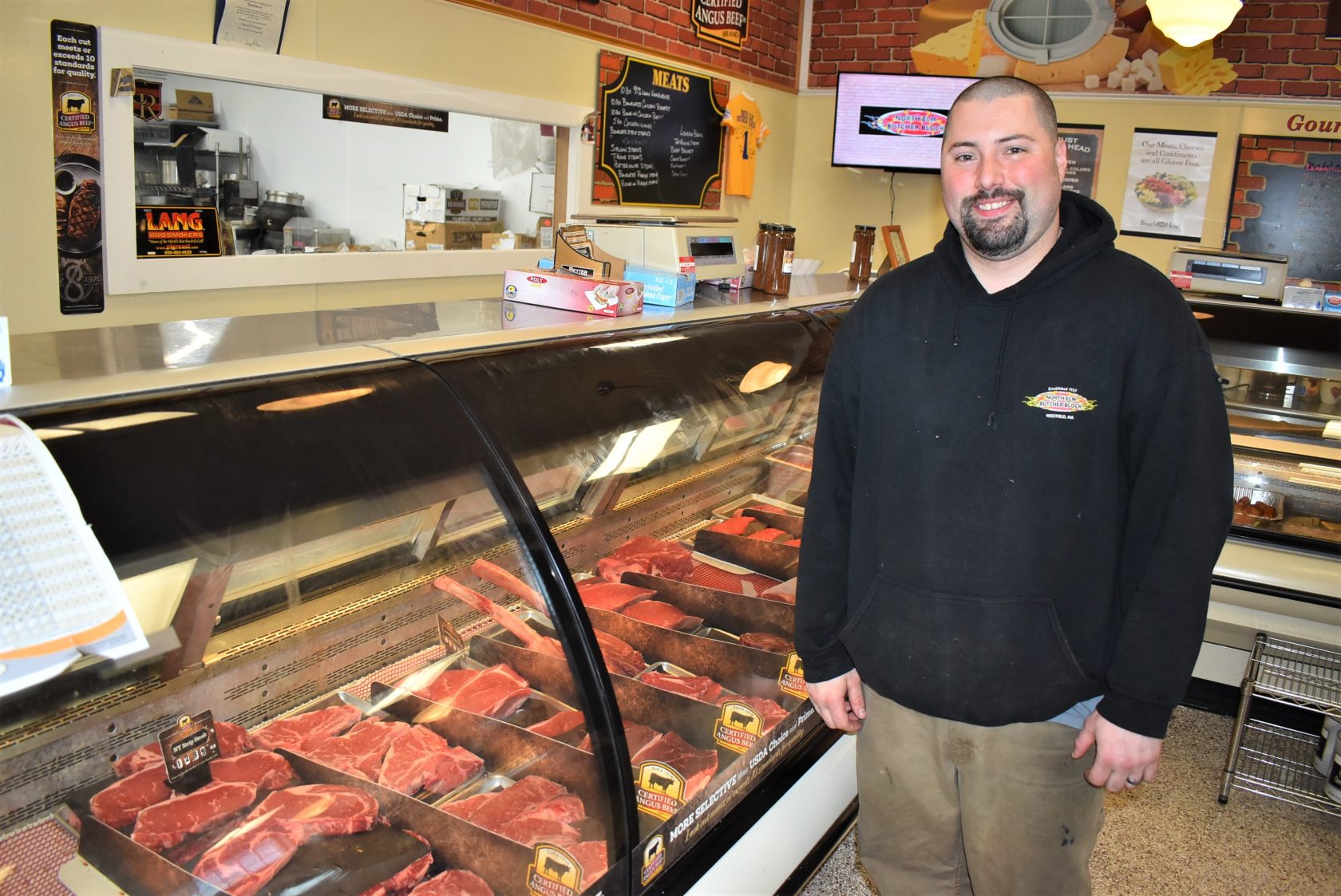 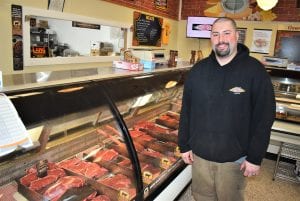 North Elm Butcher Block manager Dan Puza stands in front of a full meat case in the North Elm Street store in March. Beef prices are on the rise due to a nationwide shortage, but North Elm has a solution – bulk beef purchases. (THE WESTFIELD NEWS FILE PHOTO)

WESTFIELD – Back in the 1980s, “Where’s the beef?” was a catchphrase made popular by the fast food chain Wendy’s. In 2020, that question has taken on a more dire meaning.
With coronavirus running rampant in meatpacking plants across the country, impacting meatpacking and food-processing workers and forcing nearly two dozen temporary closures, a beef shortage is driving up food prices. Some stores are restricting the amount of beef customers can purchase at one time, while some fast food chains have removed hamburgers off their menus entirely.
“We’re hearing that it’s going to be about two to three months before things level out,” North Elm Butcher Block manager Dan Puza said.
There is not a shortage of cows, but rather a sharp decrease in the number of workers available to process the animals. According to Puza, demand is far outweighing supply by close to a 10-to-1 margin. Wholesale price for a pound of boneless ribeye is more than $13 per pound while boneless chuck roast is nearly $7 per pound.
Cows that are not being slaughtered and processed for wholesale consumption are being thrown away.
To combat skyrocketing beef prices, North Elm Butcher Block has partnered with Hudson River Valley Farm CoOp in New York to offer bulk beef buyers the option of purchasing half-cows at the cost of $3.79 per pound for a retail cost of about $1,500.
Anyone who purchases the back half of a cow will receive 150-200 pounds of grilling steaks like porterhouses, T-Bones, and tenderloins. People who purchase the front half of a cow will get ground beef for hamburgers, stew meat and prime rib, also totaling between 150-200 pounds.
North Elm Butcher Block has already pre-sold five cows.
“We’re bringing back the old school days of cutting,” said Puza, who comes from a long line of proud butchers whose expertise has earned them a solid reputation in the community. “You’re going to save yourself money in the long run.”
According to Puza, beef from a half-cow will routinely feed a family of four 1-2 times a week for close to a year.
Anyone who makes a bulk beef purchase will be able to have all of the meat divided into quantities of their choice and wrapped in heavy grade freezer paper.
Interested bulk beef buyers are urged to contact the North Elm Butcher Block at 413-562-6759. The North Elm Butcher Block is located at 37 North Elm St.