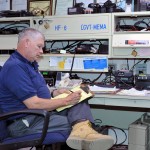 Charles Dunlap, executive director of the Southwick Emergency Management Agency, tracks the number of emergency calls from his office in the basement of the Southwick Town Hall, Monday. (Photo by chief photographer Frederick Gore)

SOUTHWICK – Western Massachusetts Electric Company (WMECO) trucks began rolling into town last night to assess damage and start restoration efforts in Southwick.
Emergency Management Director Charles Dunlap said yesterday that 96 percent of the town was without power.
“We have been working with WMECO through the storm,” Dunlap said.
Chief Administrative Officer Karl Stinehart said WMECO crews would be working on evaluation and restoration.
“Once that is done we can start removing trees,” said Stinehart.
Town officials participated in a conference call with Gov. Duval Patrick yesterday. Stinehart said a request was made to use state vendors to bring water to the town.
“Many residents with wells are without water,” he said, adding that nearly 50 percent of town residents have wells.
Dunlap said some residents have asked for water for livestock.
“We are giving out 5 gallon buckets of water,” he said yesterday.
Dunlap and his staff bunkered at Town Hall beginning at 5 p.m. Saturday as the storm took shape.
Dunlap said they anticipated downed trees and wires.
Selectman Russ Fox stopped to talk with Dunlap yesterday after taking a drive around town to assess damage.
“It’s mayhem,” said Fox. “College Highway looks pretty good though.”
The big issue in town yesterday was lack of gas at local stations and long lines at stations with gas.
The Mobil station was out of gas yesterday morning and some drivers opted to wait it out until 2 p.m. when a truck was expected to deliver gas. At the north end of town, work on Johnson Brook Bridge was shut down around 1 p.m. because of traffic caused by cars backed up waiting for gas. One vehicle ran out of gas while in line, causing another traffic jam.
“When I drove by there I saw a large amount of blue license plates,” said Fox. “People are coming from Connecticut looking for gas.”
Bugbee Road resident David Pierce was heading to his insurance agency yesterday to report a tree leaning on his house.
“At 5:17 p.m. Saturday it fell before the storm really got heavy,” said Pierce.
He said it was ironic, because his home was built by his father William 62 years ago.
“My parents moved into the house on Halloween and my father always hated that tree,” Pierce said.
His mother Joan, 86, lives with his family and told her son they were not leaving.
“I walked around and assessed the damage and the tree was leaning against the roof, so we stayed.”
Town Hall is open today and Stinehart said the transfer station is set to take tree debris.