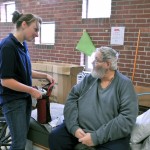 WESTFIELD – Juniper Park School and Westfield State University (WSU) are sheltering residents after the storm.
Kevin Berrien, a volunteer with Westfield Emergency Management, said the Juniper Park shelter and warming center opened Sunday at noon for those without power.
“The college provided heat, a generator, and food,” said Berrien.
The shelter was staffed by volunteers from Emergency Management, Medical Reserve Corps., and the EMS Club at Westfield State.
Yesterday WSU President Evan S. Dobelle stopped by Juniper Park to check on operations. He said Scanlon Hall was set to open last night as additional shelter space. He said the community really came together after the historic snow storm.
“Everybody in the city stepped up,” said Dobelle.
During the storm Scanlon Hall served as a shelter for 216 WSU students living at the downtown Landsdowne Campus, as well as 67 students at the Econo Lodge.
Dobelle said most of those students were able to return to their apartments and some sheltered with friends.
“The electric company is working as hard as it can,” he said.
Dobelle said WSU will be closed at least until tomorrow morning.
At Juniper Park, those in need of shelter – or just a few hours to warm up and charge their cell phone – were treated well, said those at the school.
“This is my first time in a place like this and it is well-organized,” said Ginger Coggin, a neighbor of the school.
Jennifer Haddad, who sought shelter when she lost heat, said everyone was “very accommodating.”
Westfield resident Mike Turner came to the shelter after losing power because he needs to use an oxygen tank.
“It’s been good to stay here but I want to get home,” said Turner.
Berrien said there was more than 130 visitors to the shelter Sunday alone.
“We mostly had elderly people stay and a lot of people just came to get warm and use the electricity,” said Berrien. “There’s an adjunct shelter at Noble Hospital for people who needed to be closer to the hospital or who had needs we could not meet.”
Berrien said anyone in need of shelter should come to Juniper Park or Scanlon Hall.
“The police and fire departments have been transporting people who cannot get here on their own,” said Berrien.
Visitors are advised that no pets are allowed at the shelter.  You are asked to bring your own blankets, pillows, towels and personal hygiene supplies.
Berrien said shelter visitors should bring their medications but food will be provided.
“We do have medical staff, if people need assistance,” he said.
Berrien said residents should call the police business line at (413)562-5411 for shelter information.