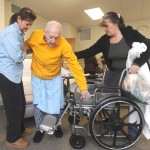 WESTFIELD – While shelter from the storm is available for the general public at Westfield State University, those with medical needs can be accommodated at Noble Hospital,  which has been designated an emergency shelter for handicapped residents by the city’s emergency management officials.
“Last night our emergency department was packed full of people” Allison Gearing-Kalill, vice president for community development at Noble Hospital, said. “They needed oxygen (and) they needed care” she said and said the staff at the emergency department gave them needed treatment, after which they stayed at the hospital overnight. Some came to the hospital because they had no place else to go and those were assessed by hospital staff before they were sent to the shelter established by WSU at Juniper Park School.
Maureen Renaudett, 70, of Depot Court in Southwick, said that she went to the hospital Sunday night because she “had a hard time breathing.”
“I have COPD (Congestive Obstructive Pulmonary Disorder) so sometimes I have a hard time breathing” she said.  She said “I was a nervous wreck” before she received treatment in the emergency department and after she was cleared there she spent the night at the Hospital.
Gertrude Chamberlain, 88, said she went to the hospital because she had no electricity at her Sackett Road Home. She said she lives by herself but has three people who help her. Still, she said “I’ve never been treated like I have been here.”
She said “I’m almost fine” she said adding “I’m going to be going home as soon as we have electricity.” But unless power is restored sooner than expected, Chamberlain will be going to the WSU shelter first.
Bruce Bussiere, director of emergency management and security operations at the hospital, said that persons seeking shelter came into the hospital through the emergency department. Some, he said, were admitted to the hospital, but 13 persons were accommodated overnight in the beds of the surgical care center at the hospital.  Those who did not need medical care were transferred to the shelter at WSU on Monday after a morning in a conference room and a hot lunch at the hospital.
“We only take a certain type of patient” Bussiere said, “those who have medical needs and can’t be at a regular shelter.”
He said that people came to the hospital not only from Westfield but also from the surrounding communities “because we are the community hospital and they’re comfortable here.”
He said that the staff at the hospital always “pulls together as a team” to rise to the challenges which arise.
“Everybody takes it in stride” he said, “it’s what we do.”
“Noble Hospital is prepared and ready to assist the community” he said.