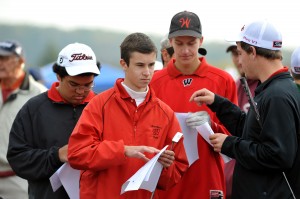 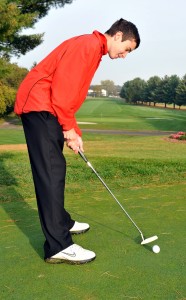 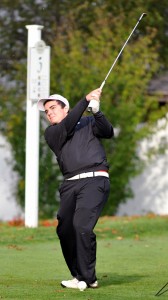 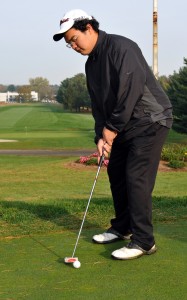 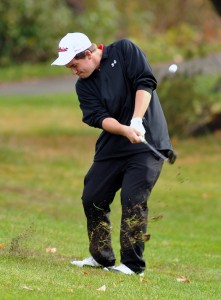 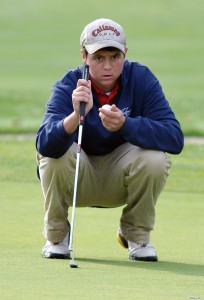 LUDLOW – While two Whip City golf teams were unable to capture a Western Massachusetts championship Monday, a few local golfers made a statement for themselves.
Westfield senior golfer Dan Parrow, and St. Mary’s Zach L. Brown and Noah Parker qualified for state championships with top seven finishes in their respective Western Massachusetts championships yesterday.
Parrow tied for sixth place in Division I with a 79 at Ludlow Country Club. Billy Walthouse won the title with a 73 for the champion Longmeadow Lancers (302 points). Westfield, playing in their first tournament as a team since 2006, finished in ninth place with a 348.
“Dan had a steady day,” Westfield coach Greg Miller said. “He missed a few short putts, but I think if you told him at the beginning of the day that he would finish with a 79, he would take it in a second. As a senior, it’s a good way to bring the long end of a high school career to a close.”

“He made the jump from a solid middle pack player to a contender in Western Mass,” Miller added. “It is a day that he and I are proud of.”

“This year, we were on the short end of some breaks, and on the winning end of some breaks,” Miller said. “We played competitive with just about everybody.  We were 10-7. We qualified strongly. They earned their way in and we enjoyed the experience today.”

Zach L. Brown tied for second with a 76, just behind Daniel Palmer, of Lenox in first (75). Noah Parker shot an 80, which netted a sixth-place tie.

“I was impressed by Zach,” said St. Mary coach Paul Finley, whose then No. 1 senior golfer Nick Masciadrelli won the championship last season. “And Noah shot another normal “Noah” round.”

The two St. Mary golfers consistent play helped the team challenge this season. An even stronger game next season could make either golfer a front-runner for the title, and help the Saints return to the top. Both golfers will have a chance to make further strides in the state championship next Monday.

Trey Tremblay shot a 90 for St. Mary, and teammate Joe Lubanski had a 93.