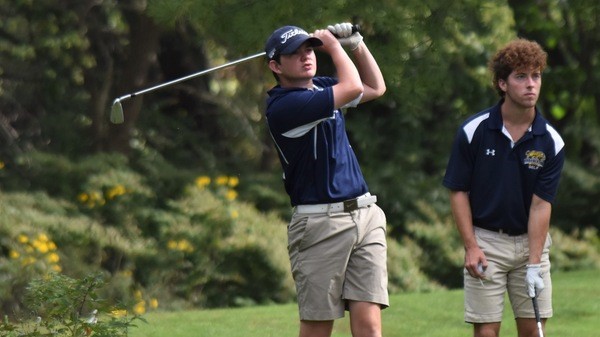 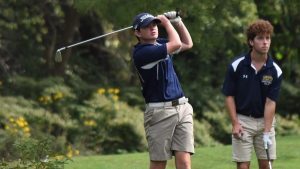 PITTSFIELD – The Salem State Golf team placed three golfers in the 70’s to capture the rain shortened 2021 MASCAC Championship Tuesday at Berkshire Hills Country Club. The event was regularly scheduled for 36 holes but was reduced to 27 after rains forced the cancellation of the back nine.
The Vikings shot a solid 467 (+23) to earn the conference’s automatic bid into the NCAA Tournament. The tournament will be held this spring.
Salem State easily outpaced Springfield College who finished solo second at 482. Mitchell College (484) and Westfield State (493) were third and fourth respectively.
Viking Ethan Doyle took home medalist honors rallying with a three under par round of 71 today to hold off teammate Brian Cannata by four shots. Doyle’s two day total was 111 (E). For his efforts, he was named the conferences player and rookie of the year.
Mitchell’s Michael McCarthy claimed third place (117) while teammate Nick Knisel and Springfield College’s Damon Monks tied for fourth at 118.
Monks had the highlight of the tournament when he aced the par 3, 13th hole at Berkshire Hills. From 185 yards out, his iron landed just past the pin, spun back, and settled in the cup for his first career hole in one. The shot propelled him atop the leaderboard, but a couple of miscues coming in dropped him to fourth place.
Westfield was led by J.J. Newcombe, who finished 40-80-120 to place eighth. Michael Waldman finished in a tie for 12th with 44-80-124. Kyle DelSignore shot the low round of the day for the Owls with a 77.

LATONA TALLIES TWICE AS OWLS FIELD HOCKEY GROUNDS FITCHBURG STATE FALCONS: Westfield State senior forward Cheryl Latona (Granby, Conn.) scored a pair of goals to lead the Owls to a 3-1 win over Fitchburg State in a Little East Conference field hockey game at Alumni Field on Wednesday night.
Westfield improved to 4-7 overall and 3-2 in the LEC, while Fitchburg dipped to 1-10 overall and 0-5 in the LEC.

Latona got the Owls on the board first just 1:33 into the match, when Emily Martin (Southwick) slid the ball to Latona on the remnants of a penalty corner.
Fitchburg tied the game with 4:16 left in the second quarter, as Sophia Piper (Chelmsford) sent a pass from the middle of the circle to Alexis Raymond (Tewksbury) at the right post for the score.
Westfield grabbed the lead back with 1:08 left in the first half, as the Owls generated offensive pressure, with Lauren Champiny’s (Somers, Conn.) point-blank shot rebounding off the pads of Fitchburg netminder Jenna Morse (Leominster/Lunenberg), but right to the Owls’ Allie Giguere (Lynn/Bishop Fenwick) on the left side, and Giguere lifted a shot into the back of the net for a 2-1 lead.
Westfield tacked on an insurance goal late, as Shannon Roycoft (Barnstable/Proctor Academy) fed a pass down the slot that Latona cashed in at the right post with three seconds left in the game for the 3-1 final. The goal was Latona’s team-leading seventh of the season.
Westfield State had a 17-14 advantage in total shots, but a 14-6 margin in shots on goal.
Corners were even at 6-6, as the Falcons generated a series of penalty corners in the final 5.5 minutes, but were unable to capitalize.
Fitchburg got 11 saves from Morse, while Riley Goulet (Marion/Old Rochester) finished with five saves for Westfield State.