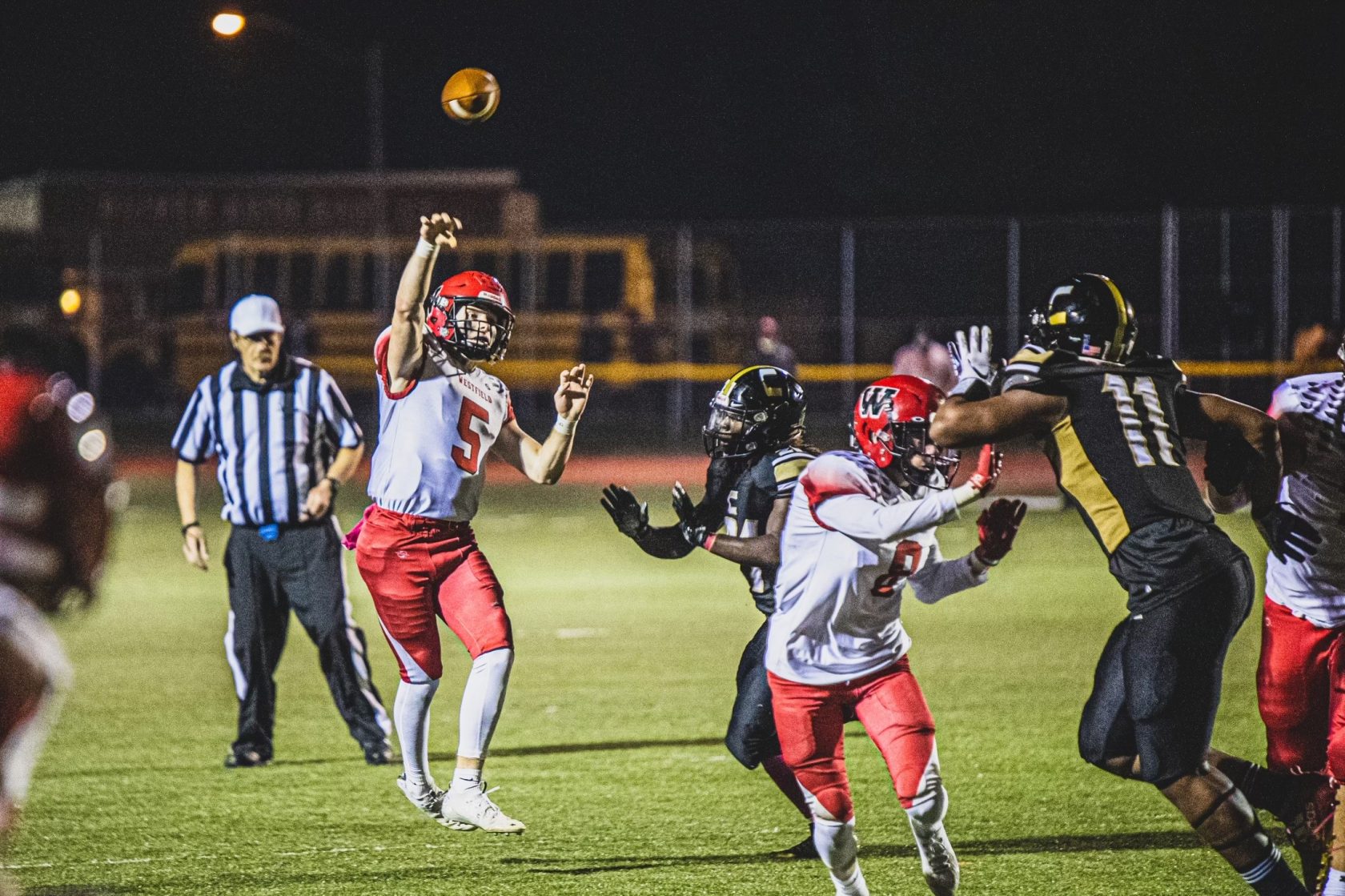 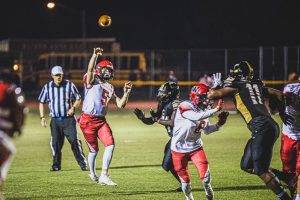 SPRINGFIELD – The Westfield High School football team took its best shot from one the best teams in the state and never backed down.
Sophomore running back Tariq Thomas rushed for two touchdowns and ShaunDez Buckhannon tacked on another as the Central Golden Eagles held off the Westfield Bombers 20-6 Friday night at Berte Field in Springfield.
It was Westfield’s first loss of the season. The Bombers won three straight to open their fall campaign but could not make it a fourth consecutive win.
“Our guys played one heck of a game,” Westfield football coach Rob Parent said. “We battled all night long.”
Central struck first, establishing early control with an efficient drive. The Eagles moved the ball 70 yards in 12 plays, capping it off with a one-yard Thomas touchdown plunge with 7:01 on the clock. The two-point conversion made it 8-0.
Westfield got its first crack on offense and struggled mightily, managing just one play over one yard, a 12-yard pass from Matthew Adamites to senior wide receiver Matthew Collins that brought the ball to midfield. The Bombers were aided by multiple penalties on the drive but were ultimately forced to punt.
Both teams stalled out on their next possession, setting up one of the wackiest series of plays in recent memory.
If Central’s first drive was a thing of beauty, than their next one was the ugliest ever. The Golden Eagles drove all the way down to the Westfield 15-yard line but committed four straight penalties, which pushed them all the way back to the 45-yard line. The Bombers defense eventually prevailed.
No more points were scored in a penalty-strewn first half, largely in part to Central being flagged 12 times for 120 penalty yards.
Westfield came out firing on the first play from the line of scrimmage to open the second half and drew a defensive pass interference penalty. The Bombers moved the ball to the opposing 35-yard line before throwing an incompletion on a short fourth down pass play.
Central took over and drove the ball 65 yards in 10 plays. The capper was a nine-yard touchdown burst from Buckhannon. Another two-point conversion gave the Golden Eagles a 16-0 advantage.
Westfield had a chance to cut the lead in half late in the third quarter but a fourth-and-goal pass fell incomplete. Early in the fourth quarter, they finally found the end zone on a Matt Adamites to Andrew Scott nine-yard touchdown in the corner of the end zone. Central blocked the extra point.
Central’s attempts to increase its lead failed as the Eagles next drive stalled just outside the Westfield red zone. The Bombers took over but were silenced with a devastating hit on Adamites that basically ended the game and sent the starting quarterback to the bench.
“We had a couple chances to tie it up late,” coach Parent said. “We will learn from those missed opportunities. I think we learned a lot about ourselves tonight. We will evaluate the film and get our players coached up and get ready to play a very, very good ‘Chaug.”
Westfield will host 4-1 Minnechaug Friday at Bullens Field. Kickoff is at 7 p.m.

GOLF
Bombers beat Lions, bound for postseason
Westfield 14.5, Ludlow 9.5
Westfield officially qualified for the Western Massachusetts championship with its seventh victory of the season, upending Ludlow at Ledges.
Anthony Schabowski and Jeremy McCormick each shot a match-low 41 to lead Westfield. Joey Calderella finished with a 42, and Andrew Florek shot a 43.
With only six players, the teams used the Division 3 scoring model.
“It’s been an up and down year so far,” Westfield golf coach Chris Strycharz said. “I’m proud of all our guys for hanging tough through some close matches. It’s nice to officially qualify for Western Mass and set our sights on playing well there.”

FIELD HOCKEY
Rams complete challenging week on positive note
Southwick 1, Mohawk 0
Devan Fox scored the game’s lone goal, Ezri Johnston made three saves in goal for Southwick, and the Rams held off Mohawk for a narrow victory.
“It was a tough game for us,” Southwick field hockey coach Jenn Oakland said. “Mohawk has improved so much from the first time that we played them and the momentum was in their favor for the first and second quarters.”
“We were definitely feeling a bit tired after two tough games this week but we dug down to try to figure out a way through Mohawk’s defense. I’m very proud of the team for never giving up and for finding a way to get the result we were looking for.”
Southwick took advantage of their third straight penalty corner for the game-winner. Marisa Coviello had a fast-paced insert to Fox, who was able to use some stick skills to get by the first defender and get off a strong shot to beat the keeper.
Southwick’s defense did a great job of pressuring the ball early to keep Mohawk out of the circle, only giving away three penalty corners. There were a couple of scrambles in front of the net but Johnston made some well-timed saves and the defense had quick sticks to keep the ball from crossing the goal line.

Bombers post shutout
Westfield 2, Smith Academy 0
Meghan Bowen had one goal and one assist, Norah Bargatti scored a goal, and Claire Griffith had an assist for Westfield. Bombers’ goalie Lindsey Brown made five saves.
“Westfield came ready to play from the start,” Bombers coach Courtney Albee said. “They scored big in the first quarter and defense kept us in the game for the rest of the game. The whole team played together and smart, keeping us in the lead. This was a big win and confidence boost.”

Tigers rally twice to force tie
Westfield Technical Academy 4, McCann Tech 4
Westfield Tech rallied from a 2-0 deficit with a pair of late first half goals. The Tigers fell behind again by two goals, 4-2, before storming back to the game with two goals in the final seven minutes of regulation.