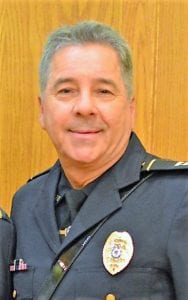 During the last Commission meeting, on July 20, Tsatsos was appointed as a full-time officer. A month later, Police Chief Lawrence Valliere received a letter from him that read, “This is my intention to rescind my full-time employment offer for the Westfield Police Department. In addition, I would like to remain on reserve status in order to gain insight and experience as a police officer.”

Valliere said Tsatsos’ concerns include that he has not had enough time or experience to determine if being an officer is for him.

“Typically, our reserve program offers a lot of insight to officers before they come on the department full-time and it also gives them an opportunity to see whether or not this is the type of employment that they really want to pursue,” said Valliere.

Valliere also said since Tsatsos was appointed in July, it did not give him a lot of reserve time. Sypek said he was impressed with Tsatsos’ interview and is slightly disappointed that he is not ready to take on the full-time position but sees the win in him returning as a reserve officer.

“With that being said, with any professional organization it is always wise to build up your system from the bottom up. I think returning Matt to a reserve police officer serves two purposes: One, it allows him to reflect more what he truly he wants to do career-wise, I think that is most important to Matt and we owe him that. Two, it allows us to take a further look at him and cultivate training for future style police officers. I think it’s a win-win,” Sypek said.

Sypeck believes that it is in their best interest to return Tsatsos to the reserve officer role and see what happens in six months to a year. The next Police Commission meeting was scheduled for Oct. 12, however, with that being Columbus Day, the meeting with be rescheduled.