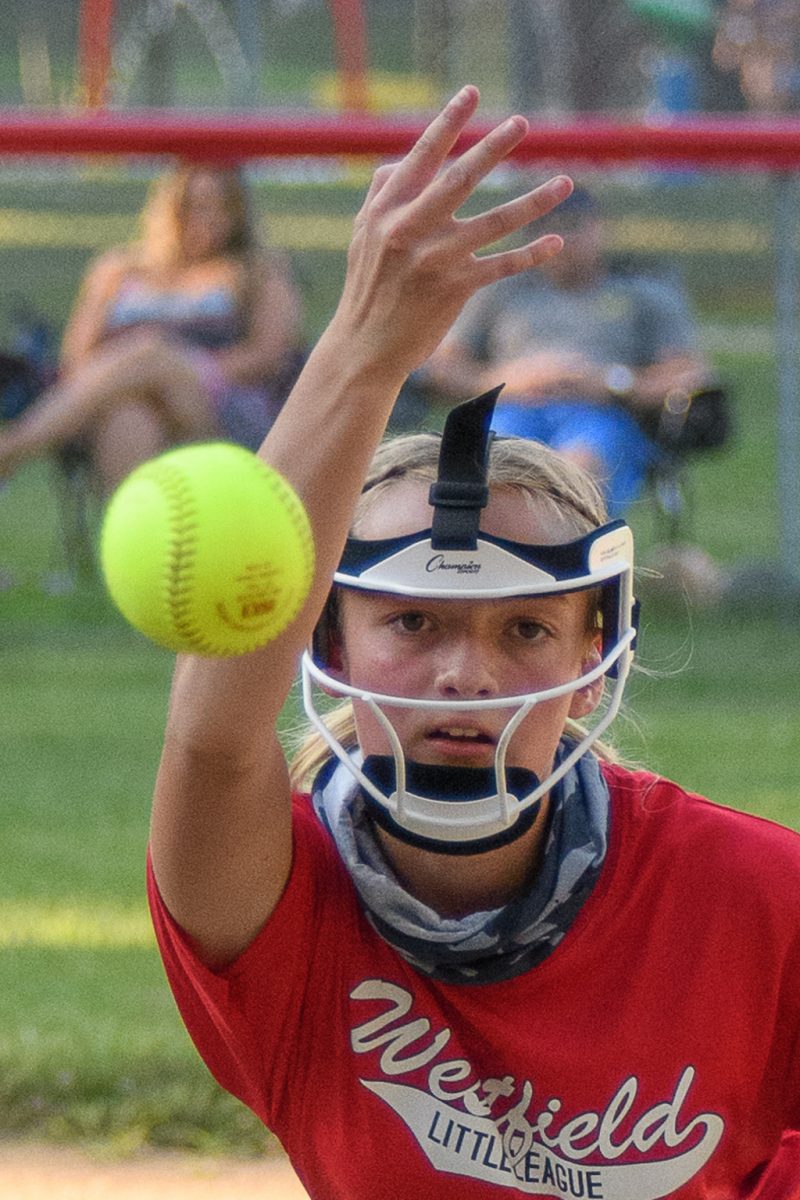 WESTFIELD – By the end of the COVID-shortened Little League Softball season in the Whip City, Meyers Brothers and OMG will have played each other 10 times in the two-team 12-and-under division.
It does not get old.
Meyers Brothers and OMG waged their version of tug-of-war, exploding for a combined 31 runs Wednesday night at Sadie Knox Field. OMG won the contest 16-15 on a walk-off RBI hit from clean-up hitter Jaylianie Santiago in the bottom of the sixth inning.
It was Meyers Brothers’ game early.
Kristy Price, Shannon Wall and Sophie Svantesson walked to load the bases for Meyers Brothers in the first inning. A bases-loaded walk from Hayley Krupienski resulted in the game’s first run.
Abby Madsen, Caitlyn Arooth, and Charlie White walked, loading the bases again for Meyers Brothers in the second inning. Bases-loaded walks from Price and Wall and a pair of run-scoring errors made it 5-0.
While Meyers Brothers’ offense was rolling from the outset, their starting pitcher, Ava Roberts, was equally effective on the mound. Roberts retired the side 1-2-3 to begin the first inning.
Although Meyers Brothers were putting up eye-popping numbers through the first 1 1/2 innings, it was an OMG moment in the bottom half of the second that made it a new game.
Santiago manufactured her team’s first run, reaching on a fielding error, stealing second base, and advancing to third base and home on wild pitches. The scoring play at the plate featured a bit of drama as Santiago just beat the tag, successfully sliding a half-beat before the catcher applied her glove.
Walks to Emma Callan, Sydney LaPanne, and Katie Bouchard combined with three run-scoring wild pitches brought OMG within one run, 5-4.
Meyers Brothers expanded its lead again in the top of the third. A booming Svantesson triple to left field in the inning’s first at-bat got things going again. Krupienski singled. Run-scoring wild pitches soon resulted in the team taking a 7-4 advantage.
The tide, which continues to churn out frenzied waters along the eastern seaboard, turned as the sharks preyed on the basepaths in Westfield. 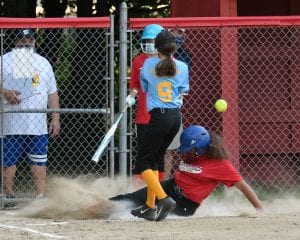 Hazel Olsen, Jailene Mateo, and Lily Clark walked to load the bases in the bottom half of the third. Emma Nelson stepped to the plate and ripped a two-run single down the third base line, tying the game at 7-all. LaPanne’s go-ahead RBI single three batters later gave OMG an 8-7 lead.
OMG increased its lead in the fourth. Walks, wild pitches, passed balls, and errors brought the score to 12-7.
Meyers Brothers recouped one run in the fifth when Madsen drew a bases-loaded walk. In the bottom half of the inning, more errors, walks, and some stolen bases resulted in a seemingly insurmountable 15-8 lead for OMG.
All was not lost for Meyers Brothers – – far from it, in fact.
A White single and consecutive walks to Roberts and Price loaded the bases for Meyers Brothers in the top half of the sixth. A RBI single from Bella Potenza and a run-scoring walk from Wall preceded a towering triple from Svantesson. The extra base hit cleared the bases and pulled Meyers Brothers within two, 15-13. A run-scoring error and a run-scoring White walk knotted the game at 15-15.
The stage was set for some additional nighttime drama.
Clark walked to begin the OMG portion of the sixth. She stole second base and advanced on an overthrow. A walk from Nelson and subsequent stolen base put two runners in scoring position. Then, Santiago knocked in the game-winner with a base hit.