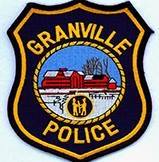 An SUV was going around a curve on Main Road and started to slide and eventually slipped off the roadway, going into a snow bank and flipping over.

“I would say speed was a factor, but it’s hard to tell because the road was pretty icy,” said Granville Police Lt. Rick Rindels.

The operator of the vehicle was the only person involved in the accident and did not sustain any injuries. Although, Rindels did add that there was major damage to the vehicle and may be totaled.