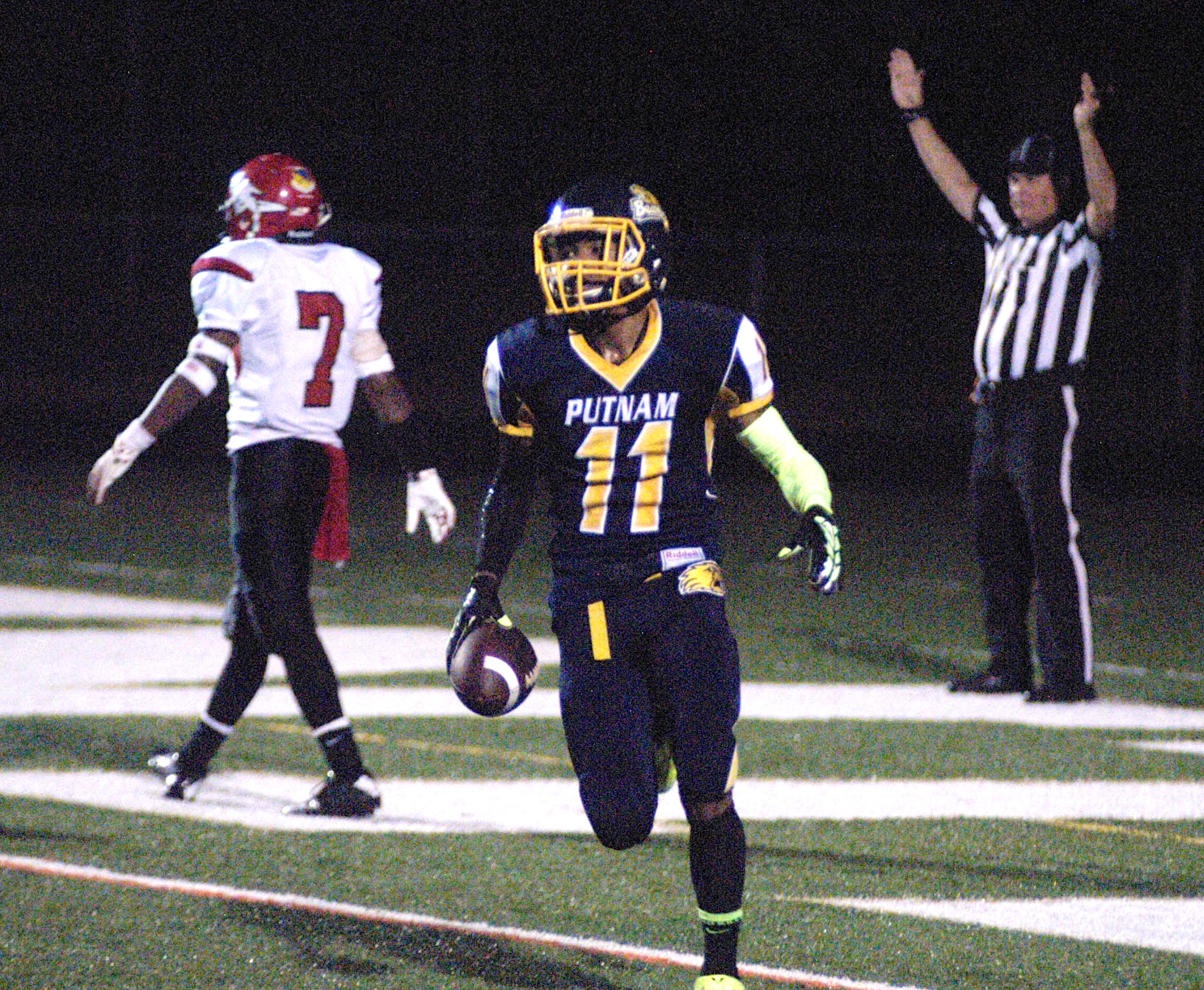 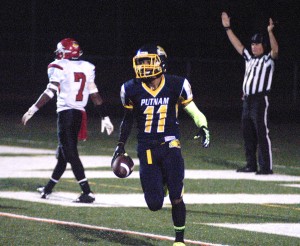 SPRINGFIELD – The High School of Science & Technology/Putnam High School football team turned to its senior quarterback, and turned back Westfield 20-7 Friday night at Central High School’s Berte Field.
Senior QB Josh Ortiz tossed three touchdown passes, including a long touchdown heave down the sideline to Javian Richardson as time expired in the first half.
It was the final dagger.
Westfield fell behind from the outset, 6-0, following an Ortiz TD strike, but rallied behind the arm and legs of Bombers sophomore quarterback Austin St. Pierre. 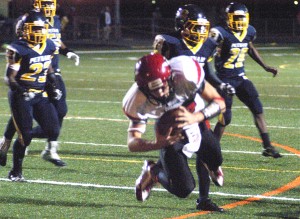 Westfield sophomore quarterback Austin St. Pierre plunges into the end zone for the team’s only score of the game. (Photo by Chris Putz)

St. Pierre ripped off a long run to get the Whip City into the red zone early in the second quarter. On the same drive, he ran a shorter one in for a score with 8:35 remaining in the first half. The extra point gave Westfield its only lead of the game, a slim, short-lived 7-6 advantage.
The CyberBeavers regained the lead with 4:05 left in the half on another Ortiz throw. The long scoring completion as time expired in the first half swung the momentum entirely in the home team’s favor.
Early in the third quarter, Putnam drove 85 yards before the Westfield defense stiffened to force a turnover on downs on their own 9-yard line. The Bombers held the CyberBeavers scoreless in the entire second half.
Westfield senior tight end John Bucko hauled in a Gronk-like catch near midfield, tearing a St. Pierre pass out of the air and dragging defenders several yards up the field before being taken down. 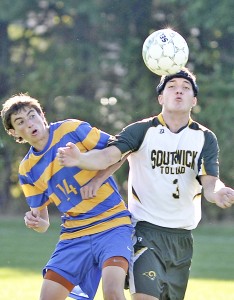 FIELD HOCKEY
Southwick 5, Palmer 0
Katy Corey had one goal and three assists to lead Southwick. Sarah Bodzinski recorded a shutout in net for the Rams. She finished with four saves.

GOLF
Southwick 23, Holyoke Catholic 1
James Longhi shot a 1-over par 36 to sweep all four points for Southwick, Bradley Durand shot a 40 to collect three points, and Nick Labodycz finished with a 43 for all four points.
The Rams improve 8-2, 5-2.

JV BOYS’ SOCCER
Southwick 2, Chicopee Comp 0
Tim McGrath had one goal and one assist, Matt Daley scored a goal, and unbeaten Southwick recorded a shutout to improve to 8-0.