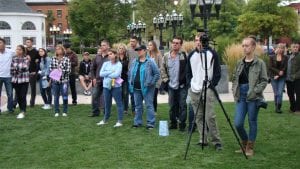 While listening to the music of the band One Hope, many visited the Wall of Hope to write messages of remembrance or encouragement for loved ones who battle drug addiction.
Represented at the vigil were many of the services in the community offering help to individuals and families, including Learn 2 Cope, Westfield Against Addiction, Western Mass Family Support Group, Narcotics Anonymous, Genesis Spiritual Center, Grandparents Raising Grandkids, the Westfield Health Department and community police.
Members of the Westfield High School Promise class and teacher Kristen Biancuzzo were also giving out paper ribbons they had made for the vigil. This year, the class will focus on drug addiction in the community as its outreach project, including a video and art from prescription drug bottles. 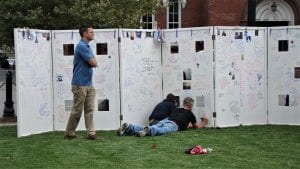 Rep. John C. Velis visits the Wall of Hope, as others write messages to loved ones. (Photo by Amy Porter)

“Unfortunately, this is our fourth year doing this,” said Mayor Brian P. Sullivan, as he opened the program. He said he recognized people who had been there in previous years, but said, “It is tough seeing new ones.”
The mayor said the vigil is “all about removing the stigma.”
“Never did I understand this was going to be the first thing I ran into as mayor until we lost three residents. We learned, we have to face it,” he said. 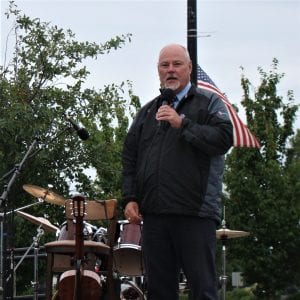 Sullivan noted that there were two new panels on the Wall of Hope. He said it’s good that people are able to speak out about it. He also said there were many more service providers at the vigil than four years ago.
“Take advantage of those people who are here to help,” Sullivan said, adding that as a mayor it is rewarding to see a community that comes together, talks about it and prays about it. “Share your stories and reach out to those you know who need the help,” he said.

Julie Olmsted, pastor of the First Congregational Church, offered a benediction and said the church was prepared to open its doors if the rain came.

“The building is old; faith must be renewed every day just like in recovery,” Olmsted said. She prayed for a future without the terrible grip of addiction, and for a vision of wholeness and goodness. 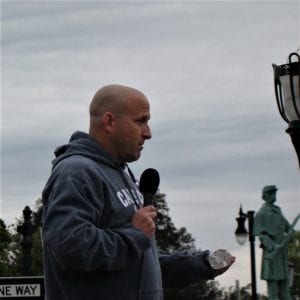 Mark Jachym shares his story of recovery at the vigil. (Photo by Amy Porter)

Westfield resident Mark Jachym shared his personal story of recovery from alcohol and drugs. Formerly a corrections officer, he said his life started to fall apart when he was arrested twice in a week for violating a restraining order; which he said were not his last arrests.

He said he “hit the skids” in a holding cell, when he tied a t-shirt around his neck and started pulling it. He said it was the love for his daughter, and the support of his mother and father that helped him through it.
Jachym said the judge gave him a “section 35” alternative sentence, which saved his life. “He didn’t have to give me that,” Jachym said, adding, “ever since then I’m trying to focus more on recovery and positive stuff.”
Jachym is now a certified recovery coach in Massachusetts and works with homeless veterans in Springfield.

“The coolest thing to me is with all the stuff I’ve been through is I’ve been able to help other people. Recovery is pretty cool, and it is possible,” he said.
Kathi Cotugno, the Mayor’s Drug Task Force coordinator who organized the vigil, also stepped up to tell her story about losing her son to drugs in 2016. 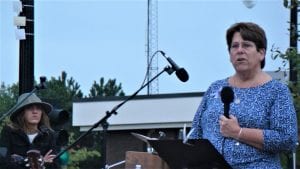 “I have come to loathe the statement that every day is a new day. This is not a dress rehearsal; this is life. For the rest of my life I am the reminder that your children could die,” Cotugno said.
She said her son Adam was her first born, and after raising him thinking that as his mother she could fix anything, she realized she couldn’t fix this. She told the story of his ups and downs, relaying how he earned his GED at age 19, when he went to his first rehab.
She also said that he was clean for two and a half years and went to work every day before he started to spiral and she lost him.
Cotugno then listed the number of deaths from overdoses in Westfield. In 2016 there were 15 deaths; in 2017, 10; 2018, 17. Since January of this year, there have been 31 overdoses. She said they are still waiting for the number of deaths.
“We need to rally together; educate and put in place help and prevention for our children,” Cotugno said.