WESTFIELD – While many of the goings-on inside the board room at Westfield State University’s Horace Mann Center have been negative of late, the board room was recently blessed with a positive moment.
Prior to the start of a meeting of the University’s Board of Trustees last Thursday, University Athletic Director Richard Lenfest presented the board with several Westfield State Owls who earned serious honors both on and off the field.
Volleyball stars Lindsey Rescott and Julia Warner, football studs Troy Cutter and Greg Sheridan, and cross country speed demon Tim Shea were all honored for their outstanding work in the classroom and on the field of play this fall as true student-athletes. 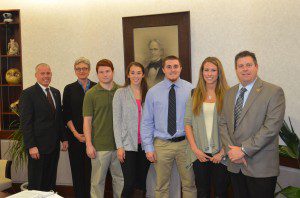 Shea, a sophomore from West Springfield, is an English Education major with a 3.93 grade point average. A three-sport athlete, Shea led the Owls to a cross country championship in the Massachusetts State Collegiate Athletic Conference this fall, winning the individual championship with a time of 26:14 on the five-mile course.
“So by the time you finish watching an episode of ‘Seinfeld’, (Tim) has run five miles,” Lenfest said, inducing laughter from the board and all the meeting attendees alike.
Rescott, a senior outside hitter who hails from the town of Northport on Long Island, New York, is a Physical Education major who served as the squad’s captain this season.
Rescott led the volleyball team to its third MASCAC championship and third NCAA tournament appearance in four years this fall.
Lenfest then announced to the board that Rescott will be graduating at the end of this semester, and joined the board in thanking her for her contributions to the school and the team.
“She’s finishing up her student teaching at Juniper Park, and the rigorous schedule of being a student-teacher and also an athlete and someone who has had such successes (as a student-athlete), I’m going to miss her and I know Coach (Fred) Glanville will miss her even more” he said. “You did a heck of a job for us.”
Warner, another senior outside hitter and a resident of Lee, was named the MASCAC’s Player of the Year in volleyball, the cherry on top of a monumental career for the Owls, in which she was named an all conference performer three times, honors which prompted Lenfest to dub her “the catalyst” for the Owl’s success.
The Movement Science and Math double major has a concentration in Physical Education and was recently awarded as honorable mention academic All American in volleyball.
“This honor is for the entire country, so that’s quite the accomplishment.” Lenfest said.
Cutter, a junior from Lunenburg, was named all-conference for the Owls at middle linebacker this fall, and was selected as captain for next season, after finishing with 75 tackles, three interceptions, and a fumble recovery on the season.
He is a Criminal Justice major who boasts a 3.6 grade point average.
Sheridan, a sophomore strong safety from Burlington who registered 53 tackles and three interceptions for the season is a History Education major with a 3.91 GPA.
Their strong academic performance, coupled with on-field excellence, led both Cutter and Sheridan being voted Capital One All Academic All District in football, “quite an accomplishment” as Lenfest put it.
“Since 2005, there have been 13 student athletes who’ve been named All Academic All District honors,” he said. “They certainly bring alot of prestige and honor to themselves, their families, and this institution.”
“This is always a highlight of our fall season,” he continued. “To showcase what we’re all here about – our student athletes.”