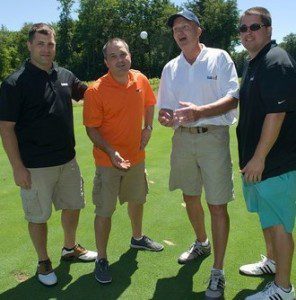 SOUTHWICK – A match of cards determined the outcome of the Seventh Annual Westfield State University Owl Club Golf Tournament at the Ranch Golf Club on Monday, Aug. 5, as the team of Randy Minde ’05, Mike Martino, Barry Felix and Gene Shaw from corporate sponsor StubHub posted a 16-under par 56. The group made birdie or better on every hole on the back 9.
The StubHub crew dethroned the tournament’s defending champs, as the team from Boathouse sportswear, headed by Doug Levesque and Tom Stewart ’88 also shot 56 but lost on the match of cards. Stewart’s pain from defeat at his home course was somewhat eased by his win in the putting contest. Stewart drained back-to-back 20 and 30-foot putts to be left as the lone qualifier for the $5,000 putting contest. Stewart’s attempt from 50 feet fell short and broke below the hole, but took home a consolation payout.
The Whalley Computer Associates sponsored foursome of Bill Oleksak, Tom Kelly, Mike Sheil, Mike Carbone finished third (for the second year in a row) with a 57.
“We had another great day at the Ranch Golf Club,” said Dave Caspole ’94, who helps organize the tournament. “The weather was perfect – temperatures in the high 70’s and blue skies.”
“Westfield Bank has been a wonderful lead sponsor for us for the tournament and has helped us build a great fundraising event – where all the proceeds go to support our varsity athletics programs. Courthouse Square – the new housing complex at 27 Washington Street – joined us as a dinner sponsor this year, and we were happy to have Barnes and Noble College Bookstores back this year as well. Many of our corporate sponsors have been with us for a long time and help make this a great event for our golfers and give great opportunities to our student athletes.” 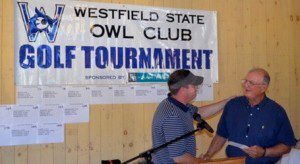