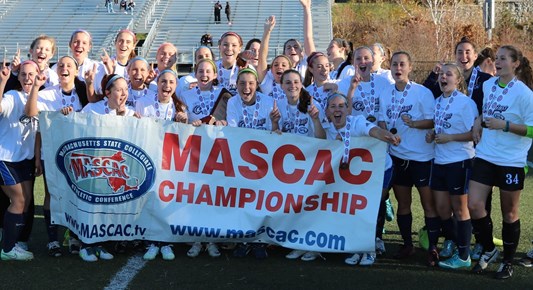 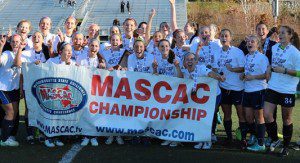 WESTFIELD – Senior back Katy Knight (Woburn/Woburn, Mass.) picked an opportunistic time to score her first career goal, as her marker proved to be the lone goal of the match as second-seeded Westfield State defeated top-seeded Worcester State 1-0 in the Massachusetts State Collegiate Athletic Conference championship game at Coughlin Field on Sunday afternoon.
Westfield improves to 10-6-3 on the season with the win, and with the win earns the league’s automatic bid to the NCAA Tournament for the fifth time in the past eight years, and the first time since 2012.
Knight, who this week was named as a first-team All-Conference defender for the third year in a row, had just one career point, stemming from an assist as a freshman. Regarded as one of the best one-on-one defenders in the league, she typically marks the opponent’s leading scorer.
Knight tallied in the 41st minute with a blast from 25 yards out that sailed over Worcester State goalkeeper Jillian Witkowski and under the crossbar. She was named MVP of the tournament.
The Owls split the game in goal between junior Anne Stack (East Longmeadow/East Longmeadow, Mass.) and freshman Natalia Falcone (Sutton/Sutton, Mass.), as has been their habit the past few weeks. Stack played 45 shutout minutes in the first half making a pair of saves, while Falcone closed out the second half with 45 scoreless minutes of her own while making one save.
The match was very evenly played, with both teams mustering four shots on goal; Westfield generated three corner kicks to the Lancers two.
Westfield avenged losses to Worcester State in the last two meetings between the teams. Westfield fell to Worcester 3-0 earlier this season, and the Lancers edged the Owls 1-0 in last year’s MASCAC Championship game at Coughlin Field.
Worcester drops to 11-6-2 with the loss. The Lancers played without leading scorer and conference player-of –the-year Alicia Macomber, who was red carded in Friday’s semifinal contest.