SPRINGFIELD – Westfield State University’s junior forward Nicole Chretien (North Attleboro, Mass.) found the back of the net twice, including the game-winning goal in overtime, to lift the Owls 2-1 over Western New England University in the women’s soccer non-conference action at Suprenant Field on Monday afternoon.
The Owls improve to 6-4-2 on the season while the Golden Bears are now 5-6-2 overall.
Western New England’s Christina Delude (Belchertown, Mass.) broke the scoreless deadlock at the 71:19 mark following a corner kick by senior Marielle Caron (East Longmeadow, Mass.). After several Westfield State defenders failed to clear the ball out of the box, Delude pounced on the loose ball and poked it past Owls’ junior goalkeeper Natalia Falcone (Sutton, Mass.). 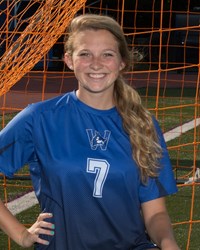 Western New England’s lead was short lived, however, as the visitor’s equalized just 50 seconds later. Westfield State was awarded a free kick, which senior Rene Hamel (Monson, Mass.) sent towards the far post from 30 yards out. Junior Casey Rotti (Rutland, Mass.) got her head on the ball and redirected it to the near post, where Chretien was waiting to tap it into the back of the net.
The Owls secured the game-winner 3:17 into the overtime period, when a deflection allowed Chretien to get in behind the Western New England defense. The junior made the most of the opportunity, burying a shot in the lower right corner of the net.
The two teams were even in both shots (17-17) and corner kicks (5-5).
Junior goalkeeper Natalia Falcone (Sutton, Mass.) played in net for the Owls and finished with four saves.
Sophomore goalkeeper Alex Lemekha (Stamford, Conn.) finished with five saves for the Golden Bears.
Westfield State travels to Bridgewater State for a MASCAC contest on Saturday at 12:00 p.m. while Western New England resumes Commonwealth Coast Conference (CCC) play on Wednesday against Wentworth. – Courtesy of Westfield State Sports