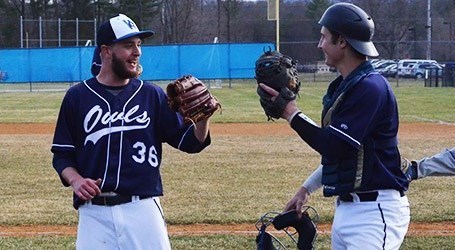 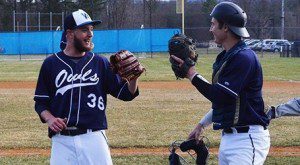 Nick Cunningham is congratulated by Evan Moorhouse after Cunningham struck out the side in the sixth inning.

WESTFIELD – Senior third baseman Pat McWilliams (Duxbury/Duxbury, Mass.) was 3-4 at the plate with three runs batted in, and Nick Cunningham (Ashland/Ashland, Mass.) spun a second straight strong start as Westfield State was a 7-2 winner over Becker College in a non-conference baseball game at Bud and Jim Hagan Field on Monday afternoon.
Westfield improves to 14-4 with the win, while Becker falls to 9-8.
Becker took a 2-0 lead in the third inning on RBI singles by Sean Stone (Blackstone-Millville/Blackstone, Mass.) and Niko Bedell (Eastport-South manor/Eastport, N.Y.).
Westfield responded in the fifth inning, finally getting to Hawks’ starter Tyler Wagar (Uxbridge/Uxbridge, Mass.) for four runs on an RBI single from McWilliams, and RBI doubles from Tim Santilli (Tantasqua/Southbridge, Mass.), and Connor Sheridan (South Hadley/South Hadley, Mass.)
Cunningham came out of the dugout with a shutdown inning, striking out the 2-3-4 hitters in the Becker lineup in the sixth.
Westfield added an insurance run in the seventh on a leadoff double from McWilliams, who later scored on a Danny Dimatteo (Cape Cod Tech/Dennis, Mass.) fielder’s choice.
In the eighth, the Owls scored a pair of runs when McWilliams plated both Jeremy Tanguay (Gateway/Huntington, Mass.) and Kyle Murphy (Westfield/Westfield, Mass.) after those two had walked and advanced on a wild pitch.
Cunningham (2-0) tossed 8-2/3 innings, allowing nine hits and just one earned run, walking one and striking out six in earning his second win of the season. Evan Moorhouse (Westfield/Westfield, Mass.) reached base four times for the Owls on a base hit, two walks and a hit by pitch. Murphy scored a pair of runs for the Owls.
Wagar (1-4) took the loss for Becker, yielding four runs (three earned) in four innings while walking three and striking out four.
Westfield will host MCLA Tuesday in a MASCAC conference double header which begins at 2 p.m.