(Nashua, N.H.) The Rivier University Women’s Volleyball team extended their current win streak to five this afternoon with a pair of non-conference wins over Westfield State University and the University of Massachusetts-Dartmouth inside the friendly confines of the Muldoon Gymnasium. The win propels the Raiders’ overall record to 15-1 while Westfield State slides to 8-9 and UMass-Dartmouth drops to 6-10. 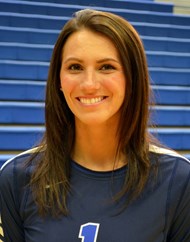 Game Two: Westfield State University 3, University of Massachusetts-Dartmouth 1 (Final)
The middle match of the day saw the Owls edge out the University of Massachusetts-Dartmouth Corsairs in four sets by scores of 20-25, 25-20, 25-13 and 25-23.
Green once again led the offensive attack for Westfield State as she hammered down 11 kills and recorded one total block. Starkey contributed with seven kills of her own and Paige Donahue added eight kills in the win. Murray directed Westfield State with 29 assists to finish her afternoon and a trio of Owls reached double-digit dig totals. Taylor was electric along the back line as she collected 25 digs and Natasha Belardo chipped in with 19 digs. Vaughn also totaled 14 digs for the Owls.
UMass-Dartmouth was paced by freshman Anita Sengara (Vancouver, British Columbia) and sophomore Olivia Wallett (Willington, Conn.). Sengara swatted down a team high 13 kills along with her 21 digs and Wallett added eight kills for the Corsairs. Senior Christina Spinazola (Medway, Mass.) passed out 31 assists and freshman Jillian Sykora (Waterford, Conn.) totaled a match high 27 digs. Freshman Nicole Silverman (Chelmsford, Mass.) also had a solid night along the back line as she had 15 digs.
Game Three: Rivier University 3, University of Massachusetts-Dartmouth 0 (Final)
The final matchup of the night was a special one as for the only time in their respective careers, Rivier’s Silverman and her younger sister – UMD’s Nicole Silverman, were able to play against each other. The elder Silverman and the Raiders ultimately won the match in straight sets by scores of 25-12, 25-18 and 25-13.
Lauren Silverman finished her day off with a 6 kill – .556 hitting percentage performance along with her two block solos to help the Raiders to their 15th win of the season. Classmates Mott and Molly McCormack (Ballston Lake, N.Y.) also had solid nights along the net as they knocked down 8 kills (.636 %) and 7 kills (.545 %), respectively. Macken dished out 19 assists with senior Alley Stefanovski (Rochester, N.Y.) adding 10 assists and 7 digs of her own. Defensively, junior Madison Soucy (Tolland, Conn.) controlled the back line with 9 digs and classmate Bethany Trevino (Westminster, Colo.) chipped in with seven digs.
Nicole Silverman collected seven digs and a kill over her three sets played against her older sister’s team. The bulk of the Corsair offense came from Sengara and Wallett who each had six kills in the finale. Freshman Jordan Rittberger (Huntington, N.Y.) led the team with 12 assists and Sykora totaled 18 digs. – Courtesy of Westfield State University Sports