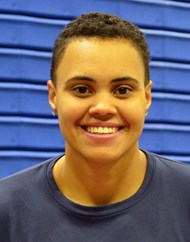 WESTFIELD – Recent Westfield State University graduate Naloti Palma has been named as a candidate for the NCAA’s Woman of the Year award.
Palma, who completed a stellar career in the track and field throwing events, capped her career at Westfield with her sixth appearance in an NCAA Championship meet and earned All-America honors with an eighth-in-the-nation finish in the shot put.
Palma was also a CoSIDA Academic All-District selection, and was chosen as the MASCAC Female Scholar Athlete of the Year.

She was selected as Westfield State University’s NCAA woman of the year candidate, and in turn was chosen as the Massachusetts State Collegiate Athletic Conference’s candidate.
Candidates are nominated and selected based on academic achievement, athletic excellence, service and leadership and a personal statement.
The NCAA Woman of the Year award honors graduating female college athletes who have exhausted their eligibility and distinguished themselves throughout their collegiate careers in academics, athletics, service and leadership.
This pool of school honorees marks the largest in the 26-year history of the award. Of the nominees for the national award, 231 competed in Division I, 117 competed in Division II and 169 competed in Division III athletics. The nominees also represent 21 different women’s sports, and 127 of the nominees competed in more than one sport in college.
The Woman of the Year selection committee, made up of representatives from the NCAA membership, will then choose the top 30 honorees – 10 from each division.
From the top 30, the selection committee determines the top three honorees from each division and announces the nine finalists in September. The NCAA Committee on Women’s Athletics then chooses from among those nine to determine the 2016 NCAA Woman of the Year.
The top 30 honorees will be celebrated and the 2016 NCAA Woman of the Year winner will be announced at the annual award ceremony Oct. 16 in Indianapolis.