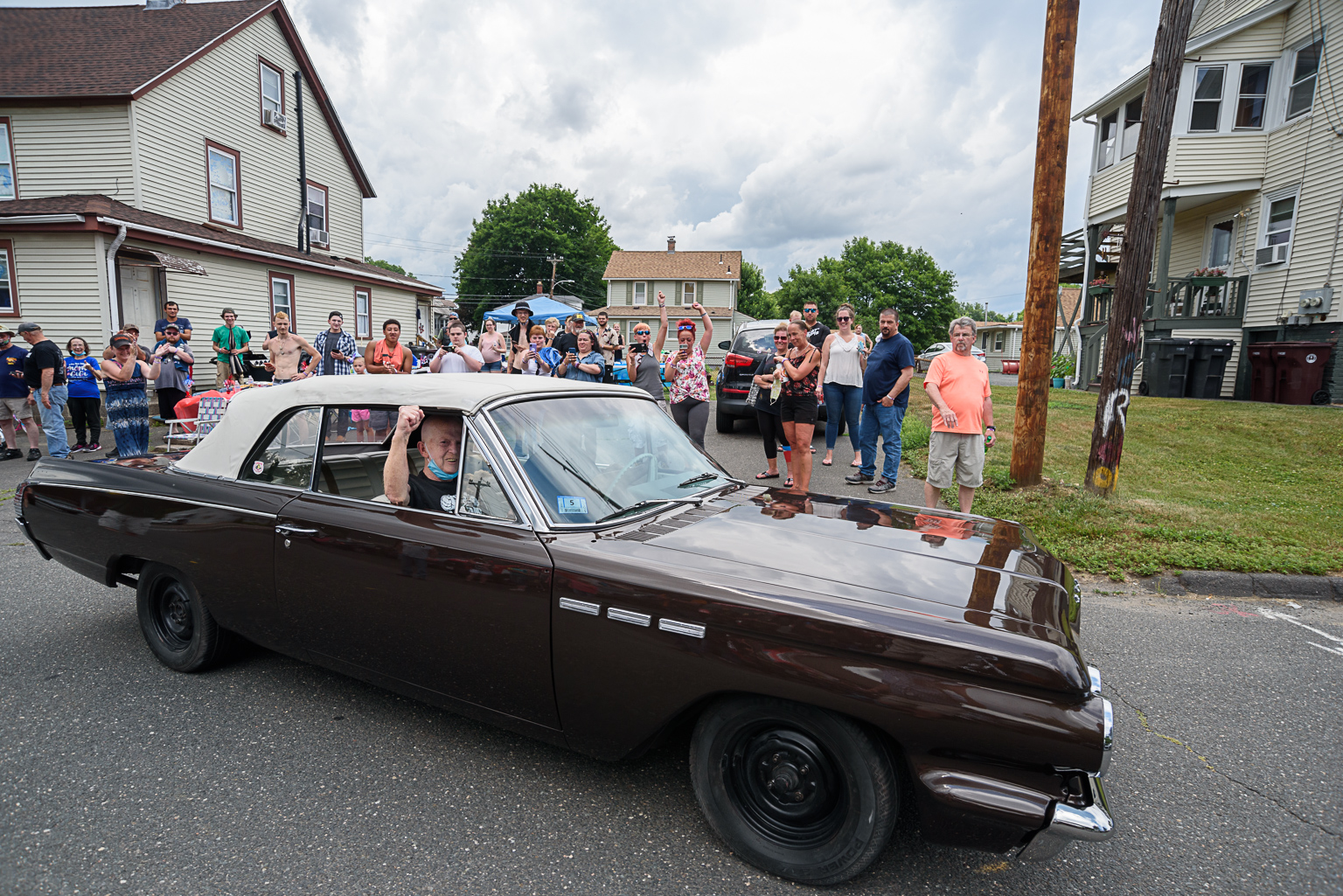 WESTFIELD – Kimberly Valles wanted to do something special for her father, Navy veteran John Dorman who is in the fight of his life battling cancer.
First, she and her family secretly borrowed his ‘64 Buick Special for body work and a paint job. “It’s been dad’s dream for years and we were finally able to do it for him,” Valles said.
The next part of the plan was the big reveal, which she envisioned as a parade of antique cars, with her dad’s Buick Special bringing up the rear. 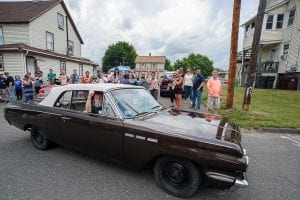 While friends and family cheer, John Dorman goes for a ride in his restored 1963 Buick Special convertible driven by one of the car’s restorers, Harley Avezzie. (MARC ST. ONGE/THE WESTFIELD NEWS)

“The car is just about done and we’re planning our own little version of ‘Overhaulin’ and doing a secret reveal this weekend. He’s been so sick with chemo he can’t drive it and has no idea it’s gone from the garage and been at the shop,” Valles posted on Facebook.
Valles invited family and friends and anyone with an antique car to join in the parade, and drive past Dorman’s Meadow Street home.
She couldn’t believe the response she got. A hundred messages, many from people she didn’t know, who wanted to help, or join in the parade.
The cars met at 1 p.m. at Dunkin’ Donuts on East Main Street to line up. Meanwhile, family and friends were at Dorman’s house for a cookout.
When the parade was due to go by, her father sat in front of the house, waving as the antique cars, trucks and motorcycles from the Crippled Old Busted Bikers (COBB) Club drove by.
When the ‘64 Buick Special drove up at the end, everybody, including Dorman himself, burst into tears. Then Dorman got in and went for a ride.
After the parade, Valles posted again on Facebook.
“From the minute I posted about this until even right now trying to clean up and unwind the love support and help from my family, friends, loved ones, this community and even far beyond that has been amazing!! This day could not have been more perfect!! The car was perfect. The food was perfect. The weather was perfect. The outcome, the help ABSOLUTELY EVERYTHING was perfect!!” Valles wrote.
“There will never be any way I could ever truly thank all of you!!!,” she added.