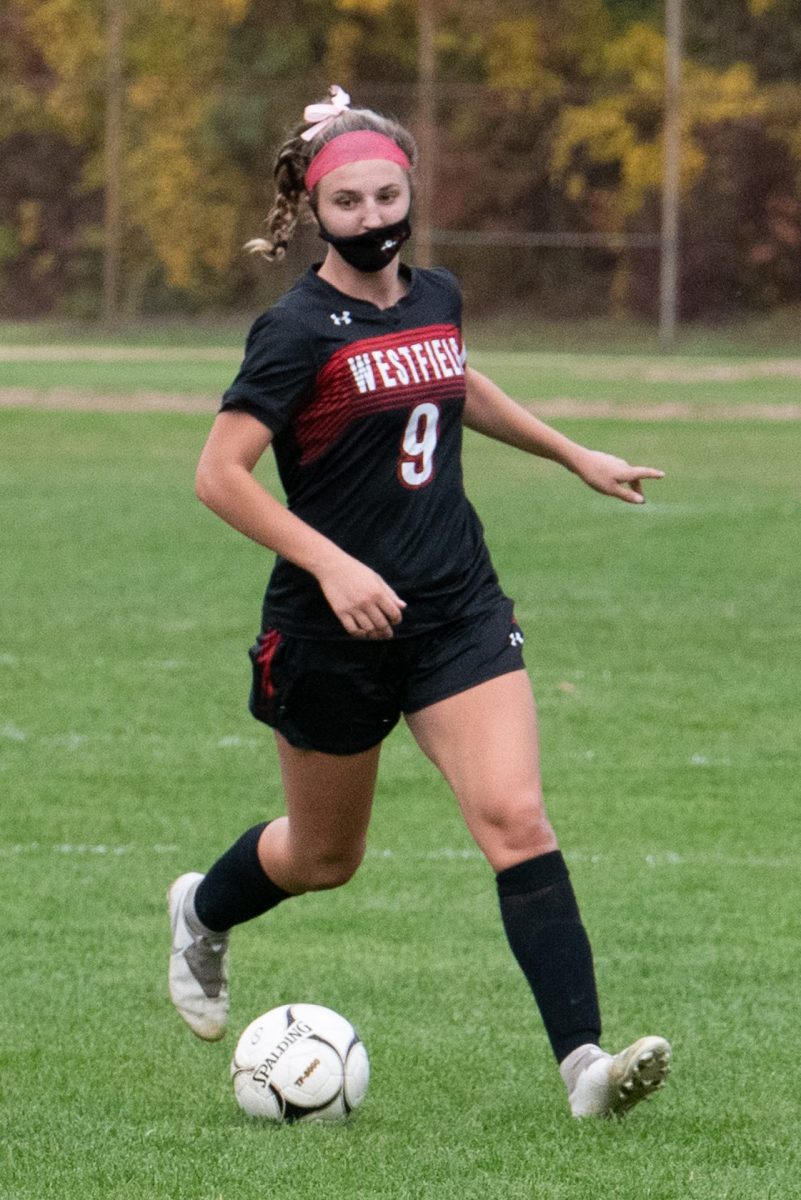 WESTFIELD – A few weeks ago, the Westfield Bombers did not even know if they would get the opportunity to defend their 2019 Western Massachusetts Division 1 girls soccer championship crown, chase milestones, or even practice, for that matter.
“I remember my mom specifically telling me things happen for a reason,” said Westfield senior forward Chandler Pedolzky, an All-New England selection in 2019. “So if I didn’t happen to get my hundred points this year then something good next year is going to happen for me. When one door closes, another one opens.”
The door cracked open for Pedolzky during last Thursday’s road contest against Holyoke. In that game, the senior forward reached her hundredth point several times over. 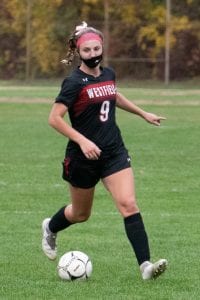 Pedolzky recorded a goal for her 100th point, but for some reason it was not counted. Determined to reach her milestone, the senior forward set up fellow teammate Catie Bean, also a senior forward. That point too was removed by the official scorekeeper.
Finally a short time later, Pedolzky received a pass from Bean near midfield, dribbled the ball through the Holyoke defense and lightly tapped it into the corner of the net.
“You can try to take her away, double her up and attempt to take away her effectiveness … but she is very tough to defend,” Westfield High School girls soccer coach Ryan Lavner said. “Chandler is very, very, very athletic; big; strong; fast; good at basically any sport; and has been playing year-round forever. She has a nose for scoring goals.”
While Pedolzky’s 100th point truly was hard-earned, at one point it seemed as if it would never happen.
This season, with so much uncertainty surrounding the season, due to the coronavirus outbreak, it was well within the realm of possibility that Pedolzky would not even get the chance to realize her milestone moment. After much debate though, the Massachusetts Interscholastic Athletic Association and Pioneer Valley Interscholastic Athletic Conference, under guidance from their respective COVID task forces and the blessing of Massachusetts Gov. Charlie Baker, opted for a shortened season with rules modifications for several fall high school sports. Ultimately, it allowed Pedolzky to continue her individual quest and the Bombers to showcase their talents one more time with a concerted effort to win all of their matchups. 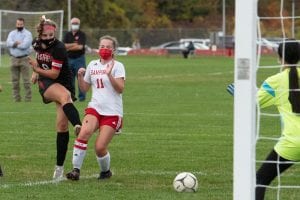 “I’m definitely excited that I got the chance to be able to score a hundred,” Pedolzky said. “Let’s start a history and start a trend for Westfield to keep going in and make a name for ourselves.”
While the spotlight has continued to shine brightly on Chandler Pedolzky’s offensive fireworks, the fuse was actually lit by her twin sister, Emma, a 2019 All-State player, who lurks in the shadows as the team’s stalwart midfielder-center back.
“I feel like sometimes a lot of attention is drawn toward me mostly for goal scoring … but (Emma) does a big part on our team that goes unrecognized and unnoticed by most people,” Chandler explained. “If she definitely wasn’t on the team, I don’t think we would be the same and I definitely don’t think I’d be the same either as a player.”
The twin sisters have brought out the best in each other.
“(Emma) was my first defender, my first competitor,” Chandler said. “We just keep pushing each other. I think us together helps push the rest of the team along too with Catie (Bean) and Sage (Smith). That’s what we do in practice – – we push and push – – so that in game-like scenarios we will be ready for them.”
The Pedolzky sisters constant push for success has them poised for even bigger things after high school. Chandler will attend the University of Massachusetts on a full scholarship in the fall 2021. Emma is expected to attend Bryant University.