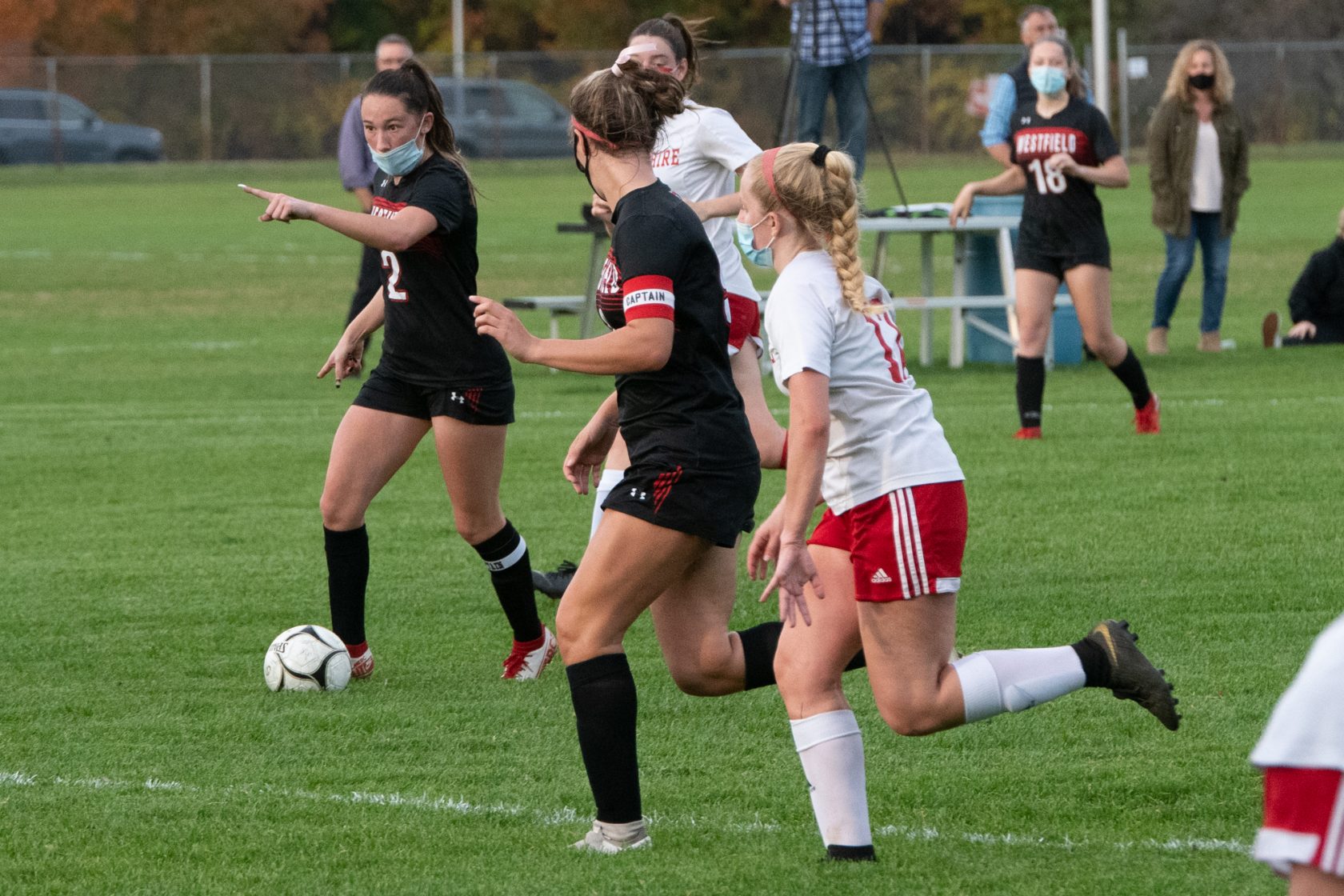 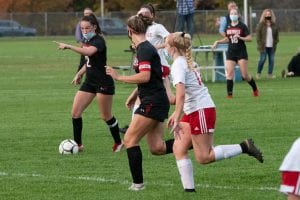 WESTFIELD – One year removed from a Western Massachusetts Division 1 girls soccer championship title and several wins into the COVID-shortened 2020 season, opponents all over the region are starting to get the point that the Westfield Bombers are still good, really good.
Westfield senior forward Chandler Pedolzky got the point, the 100th of her career, in fact, during a rout of Holyoke last week. Five days later, she added to it.
Pedolzky tallied a hat trick, collecting three goals and one assist in a 7-0 shutout of Hampshire Regional Tuesday.
Westfield came out fired up, firing one shot after another at the Hampshire net. Emma Pedro was the first Bomber to score, finding the back of the net in the second minute. Riley Byrnes assisted.
Westfield continued to pepper the Hampshire zone with shots. The attempts were either high or wide, or turned away. The pressure finally got to the Red Raiders in the second quarter when the Bombers tallied four goals in a 15-minute span. 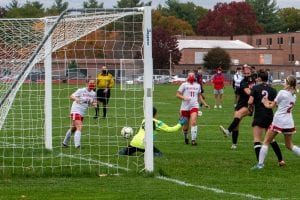 Bombers’ Chandler Pedolzky (9) blasts the ball past the Hampshire goalie and into the back of the net. (BILL DEREN PHOTO)

“Coach (Ryan Lavner) told me to focus on three-touch passing,” Pedolzky said. “Once we started doing that, a lot came together and started to flow and jell. I think that’s when we started dominating the most and where the goals started coming in.”
Facing a steep angle deep along the right side of the penalty box, Pedolzky somehow managed to send a shot into the opposite side of the net just inside the post for a 2-0 lead with 14:49 remaining in the second quarter. Catie Bean assisted.
Bean also set up the next goal. About four minutes after assisting Pedolzky, Bean placed a ball out front of the net for Kelsey Bouchard, who hammered it home for a 3-0 advantage.
Less than two minutes later, Pedro scored her second goal, smacking a shot off the post. The ball ricocheted off the post and back into the opposite side of the net to make it 4-0. Annie Boisseau assisted.
Westfield made it 5-0 with a goal from Pedolzky in the closing seconds of the first half. Maggie Prystowski earned the assist.
Pedolzky and Autumn Lalli each tacked on a goal in the fourth quarter. Pedro assisted Pedolzky.

Mon., Oct. 19
GYMNASTICS
Goodreau leads Bombers in downing Brownies
Westfield 128.85, Agawam 117.40
Westfield’s Isabella Goodreau won the all-around competition with 32.65 points, and the Bombers improved to 2-0 with a road victory against the Agawam Brownies.
Goodreau placed first on the uneven bars (8.0) and second on the balance beam (8.65). Her teammates, Lizzy Galczynski took first on the beam (8.65) and Rylee Altieri second on bars (7.9).
Altieri led the way on vault, finishing first with an 8.35. She was followed by Westfield’s Kelly Burns and Galczynski, who tied for second place with an 8.3. Bombers’ Emery James was third (8.25).