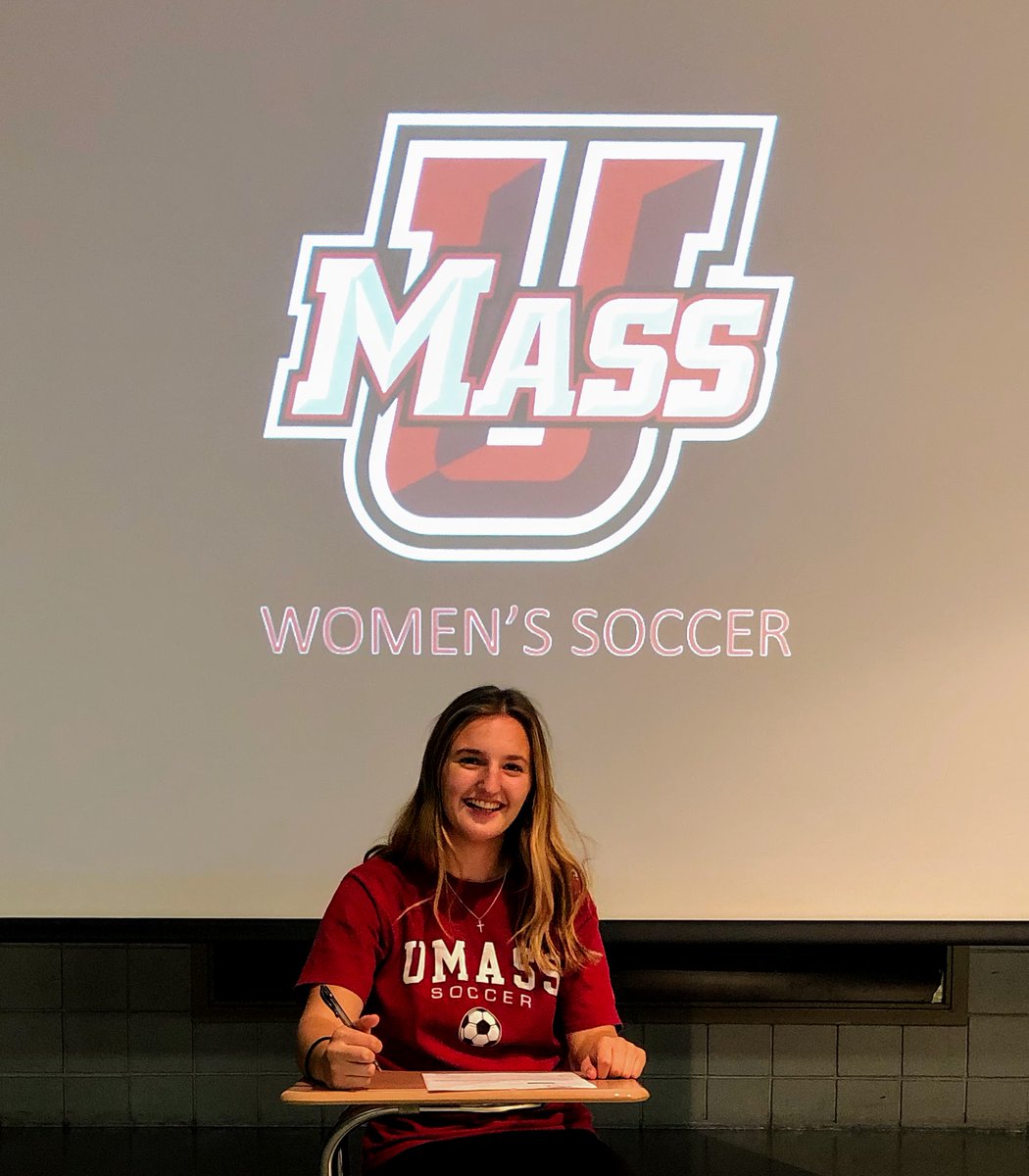 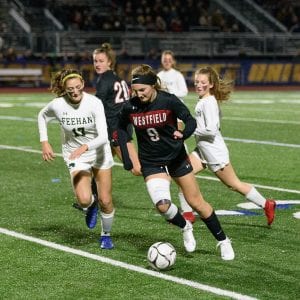 WESTFIELD – One local All-American was such a juggernaut offensively not even COVID-19 could slow her down.
Westfield High School girls soccer star forward Chandler Pedolzky capped off a COVID-shortened season this past fall with her fellow Bombers teammates, compiling a nearly perfect record at 7-1, but the excitement has still not died down.
In the days following the season’s end, Pedolzky, a senior, signed a national letter of intent to play for the University of Massachusetts Minutewomen in Amherst, and has been named an All-American, a first for WHS in recent memory.
“All the recognition. All-American. I never imagined to get all of this when I first started out,” Pedolzky said.
Pedolzky received her start as a youth at around the age of eight, playing for the FC Stars club team. In 2017, as a freshman, she stepped up to play for the Westfield Bombers as well as for NEFC, a non-profit premier soccer club which develops and trains youth soccer players between the ages of 6-23 in the states of Massachusetts, New Hampshire, and Rhode Island. 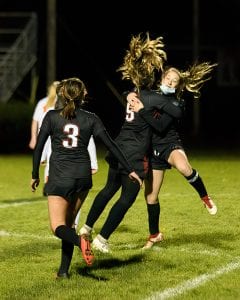 During that first season at Westfield High, Pedolzky spent most of her time centered at midfield, playing alongside her twin sister and defensive specialist, Emma, and her best friend Catie Bean, also a forward.
“It was nice being around them,” Chandler Pedolzky said. “We started playing soccer together so it is kind of sad … that it was ending. It was exciting.”
It all came together during Pedolzky’s junior year.
Westfield went on a historic run, knocking off West Springfield in the West Division 1 girls soccer semifinals 4-1 on a bitterly cold night at Central High School’s Berte Field before slipping past Minnechaug 1-0 in the championship game. Seeking even more, Pedolzky lifted the Bombers in an overtime thriller against Algonquin in the state semis, lofting a ball over the head of the opposing goalie into the back of the net from about 40 yards out for the game-winner. Only a loss to Bishop Feehan in the state title game could keep the Whip City from wearing another golden crown.
“That was one of the best weeks of my life,” Pedolzky said. “That feeling was just amazing, beating West Side, our competitor all year. The way I felt was even better than Western Mass. Then when I scored that Algonquin goal, with the team running to me and all the fans supporting us running to me, it was the craziest moment of my life.”
If that moment was the craziest of Pedolzky’s life, the next several months were the zaniest in all of our lifetimes.
The coronavirus outbreak struck in March, shutting down local, college, and pro sports. The 2020 high school sports spring season was canceled in Massachusetts. A summer of unease led to a delayed start to the soccer season in the fall, and ultimately a shortened one without a postseason tournament. Coronavirus had derailed the Bombers plans for a repeat. 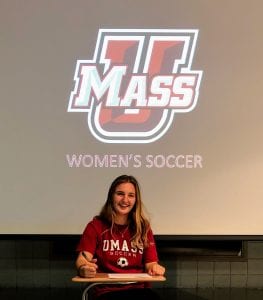 “I really thought we had a chance to go back there, and prove we had more in us,” Pedolzky said. “Obviously this year though, we knew we were grinding.”
Again, the Bombers churned out one victory after another; the star forward turned in more points. In a victory over Holyoke, Pedolzky recorded her 100th career point. She finishes her high school career with 84 goals and 30 assists.
It is that pedigree on the field as a talented individual and selfless teammate that helped her earn All-American honors from the United Soccer Coaches Association.
“I don’t even have the words to describe what it means,” Pedolzky said. “I just never expected it. As a freshman, I didn’t even know it was a thing. All-State. All-New England. I just showed up and played. I am truly grateful for everything I have ever gotten, for the teammates who got me there, and the coaches who pushed me to get there. …It was (exciting) to see my progress and how I transformed, to see all the hard work come to life. I’m excited to see where it keeps taking me.”
All eyes will be on Pedolzky this fall as she steps onto the campus at UMass-Amherst. She plans to work toward a degree in law or business.
The star forward admitted that although it is rewarding to know that she will remain a fixture within the community for some time, having been chosen an All-American, she claims there is still much to prove.
“Obviously I want to make a name for myself where I go,” Pedolzky said. “I am excited to meet new people and a new community of girls from all around the country. …I am going to focus on playing at UMass just like my freshman year (at Westfield High). I am going to work hard, earn my spot, and try to help them be the best.”