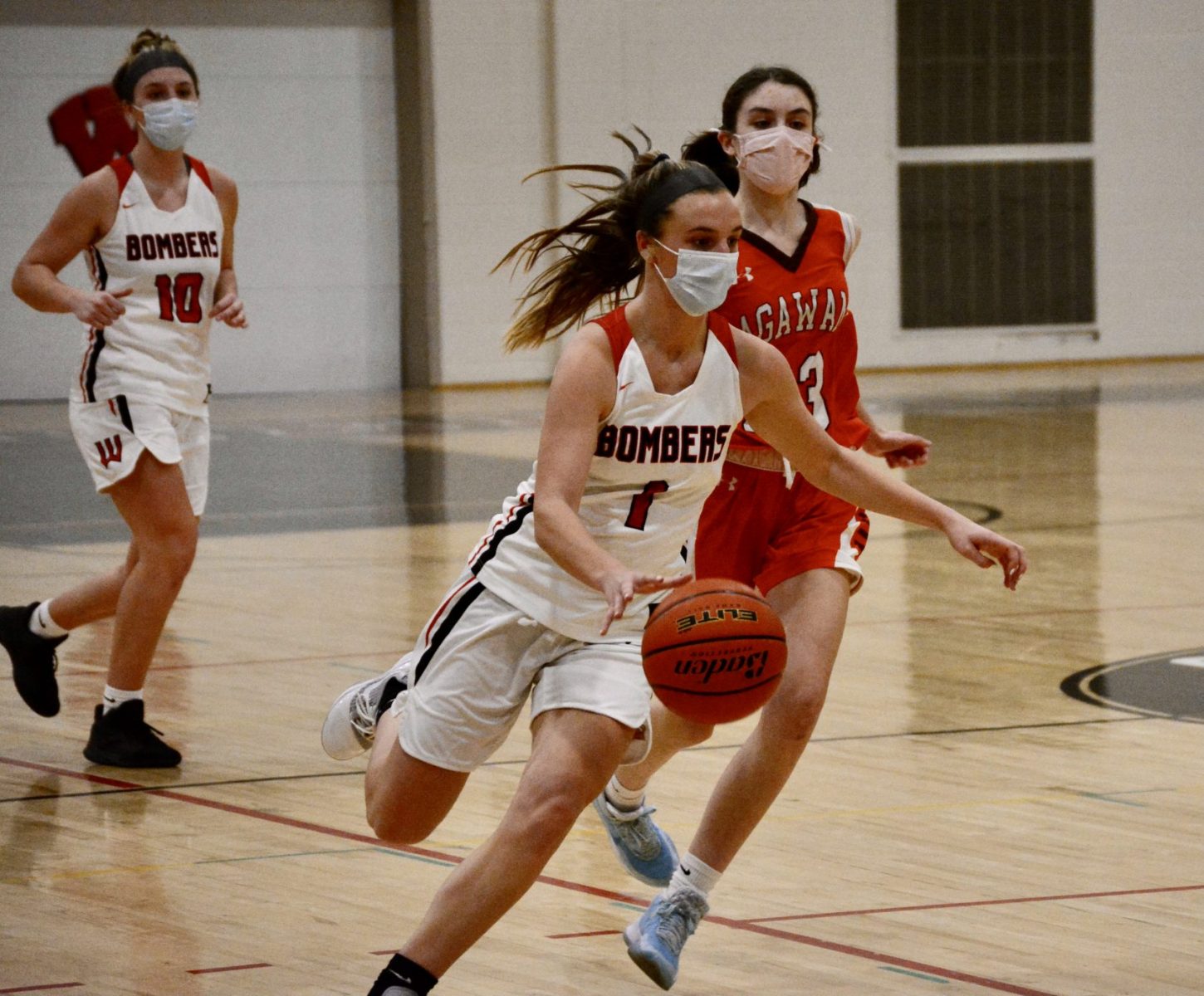 WESTFIELD – The Pedolzky sisters dominated the soccer field this past fall for Westfield High School, so it should come as no surprise that – – guess who – – is dominating again on Day One of the Bombers girls basketball season.
Westfield twin seniors Chandler and Emma Pedolzky combined for 28 points, more than half of their team’s total as the Bombers ran past the Agawam Brownies 54-25 Tuesday night in the Whip City. 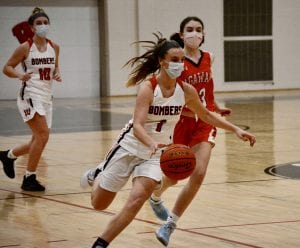 Westfield senior Emma Pedolzky (1) dribbles the ball up the floor against Agawam as her twin sister, Chandler (10), looks on from the back court. (CHRIS PUTZ/THE WESTFIELD NEWS)

“This is a group that wants their legacy to live on,” Westfield High School girls basketball coach Dylan Willey said. “These girls are just unbelievable. …They weren’t ready to take it easy and have fun. They wanted to win; they wanted to compete.”
Chandler, who was known for her scoring prowess as a forward on the soccer field, handled the ball quite nicely for Westfield on Tuesday, finishing with 15 points. Emma, a defensive stalwart in soccer, totaled 13 points against Agawam.
The dynamic duo, along with their fellow teammates, stymied Agawam from the outset.
Westfield opened the game with a 16-0 first quarter run and led 21-3 after eight minutes of play. Chandler had 12 points during that stretch, including two 3-pointers.
“When we fly around, when we get tips and steals, we’re pretty good,” coach Willey said.
Westfield fell into some kind of funk during the second quarter, scoring just a measly three points, but bounced back with a 20-point third quarter that put the game out of reach. Emma pumped in 10 of those points.
“When our defense does good, that’s when we get points,” Emma said. “Our offense comes from our defense.”
Emma’s twin sister echoed those sentiments exactly.
“Our defense is what spikes everything,” Chandler said. “It’s what gets us going and what gets our whole team hyped. That’s how we start creating scoring opportunities more often and layups easier.”
There were other key contributors for Westfield. Bombers’ Morgan Fillion also tallied double digits, scoring 10 points. Ali Piper and Saige Smith finished with nine and seven points, respectively.
Stephanie Maloni led Agawam with eight points.