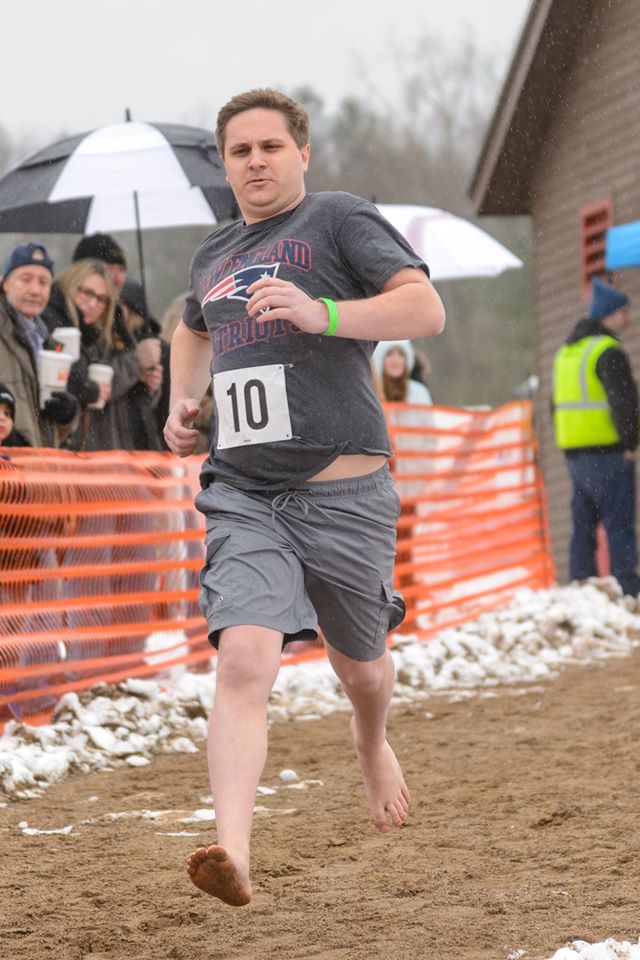 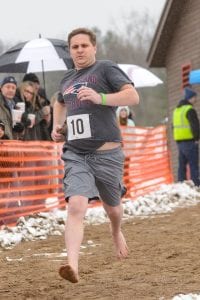 This is not a scene from the reboot of Baywatch, this is Westfield News reporter Peter Currier running to the shore of Hampton Pond for his first ever Penguin Plunge. (Photo by Bill Deren)

WESTFIELD- Have you ever had a picture taken of yourself where you can point to it and say “this is the moment where I realized I had made a huge mistake,”?

In this image right here, you may notice that my eyes are focusing on something ahead of me as I ran down the sand. At that moment, I was looking at a small patch of snow that sat right on the edge of Hampton Pond. At that moment, captured in a snapshot by Westfield News photographer Bill Deren, I was thinking to myself, “maybe I am not as prepared for this as I thought I was.”

Nevertheless, I pressed forward for a few reasons. Firstly, how much of a fool would I have looked like if I went from a full sprint to a complete stop just before the water while my fellow penguins walked right past me into the cold pond.

Secondly, doing a penguin plunge or polar plunge has been sitting on my bucket list for a number of years now. I figured now is the time to do it in fresh water instead of being pressured to do it in salt water sometime later in my life. For those who do not know, salt lowers the freezing temperature of water to below 32 degrees fahrenheit, meaning that the water can be much colder without turning into ice.

Finally the Penguin Plunge is, if nothing else, for a good cause, and I was there to do my part. The annual plunge raises thousands of dollars each year for the Amelia Park Children’s Museum in Westfield. It is my belief that giving kids a space to learn interactively and play is necessary for their intellectual development. Having such a space in or out of school is something I wished I could have benefitted from as a child, so there’s no reason that the children of Westfield shouldn’t.

Of course, all thoughts of charity, pride, and bucket lists were swept from my mind the moment my feet hit the water. In that moment, a slightly animalistic instinct took over that told me, “get to the other side of the course. Now.”

I tried to do just that, trudging as fast as I could through the icy water while onlookers rightfully enjoyed my reaction. Of course I was more than halfway through the water, seeing the light at the end of the metaphorical tunnel, when one of the firefighters chilling in the water yelled to me that I didn’t ring the bell yet.

I then turned, laughing and panicking to ring the bell, because I didn’t want to be that guy who skipped it despite the haste with which I ran through the water. I slapped the bell with slightly more force than I intended to, and moved even faster to get out of the water and into the heated tents.

It wasn’t until my waist left the water that I realized that I had not felt anything below my torso since I entered the water. I made that realization then, because at that moment the numb sensation left me, and I could feel the 36 degree air blowing across me.

I like to think that I am not being dramatic when I say that is the worst cold I have ever felt, and it was worth it.

The veterans of the Penguin Plunge were correct when they informed me beforehand that the worst part was leaving the water. That feeling was heavily contrasted with the feeling of complete euphoria I experienced when I burst into the tent to feel warm air take over. I then put my hands on my knees to catch my breath and let out an expletive or two to sum up my emotions to those who were already in the tent, having gone through in the wave before me.

To those who may be considering taking the plunge next year, I say that you should do it at least once in your life. Whether I jump in that frigid water again next year is certainly up for discussion. I do know, however, that I will be better prepared next time and that I will not sprint through it again, lest my heart actually leap out of my chest.