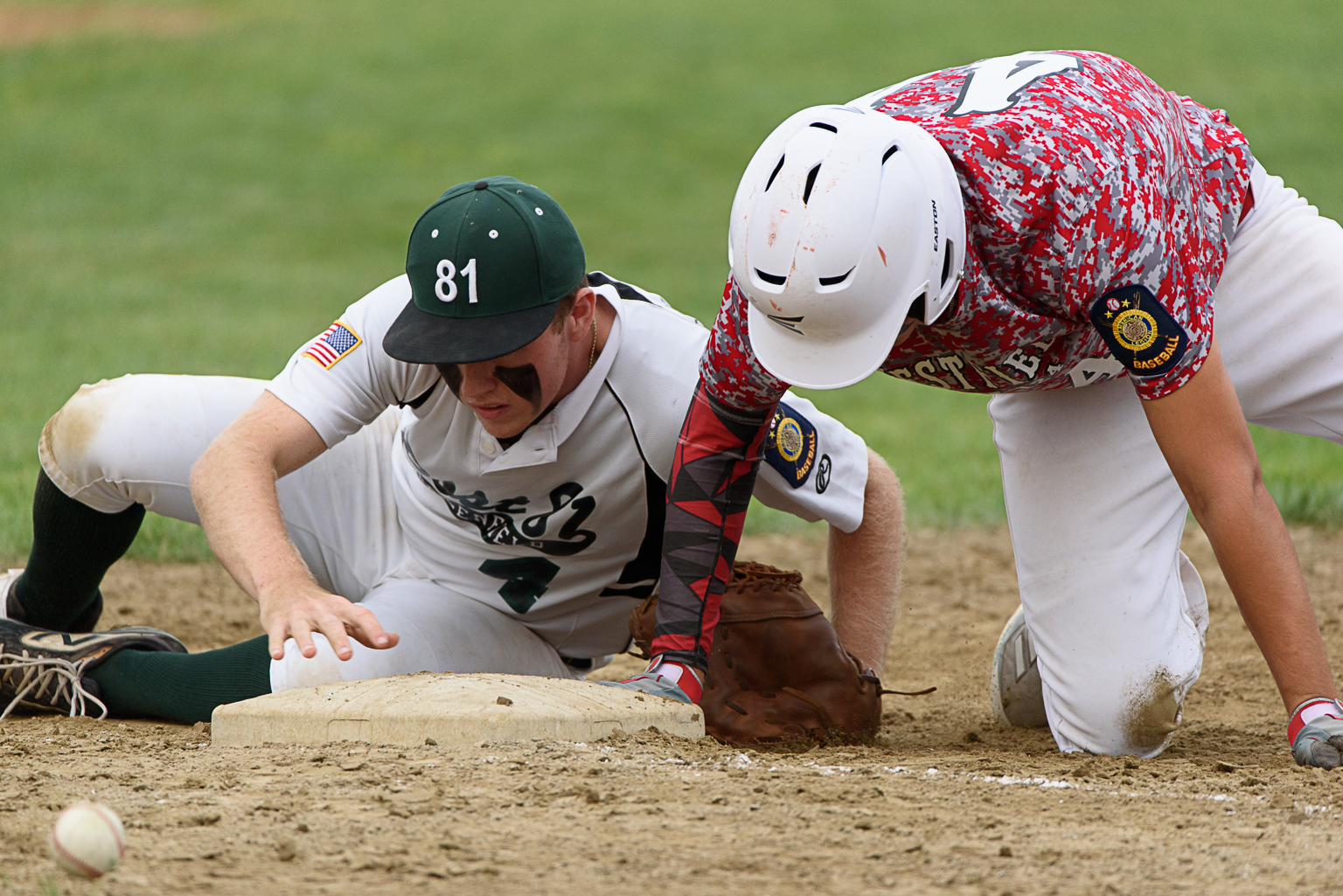 GREENFIELD – Greenfield 23, Westfield 0
That was the net result from an American Legion Baseball Senior double header between the two Western Massachusetts finalists as surging Greenfield Post 81 swept its way into the state tournament with a pair of five-inning victories, 10-0 and 13-0, over red-hot Westfield Post 124 Wednesday night at Greenfield High School’s Veterans Field.
Westfield ran into a perfect storm. 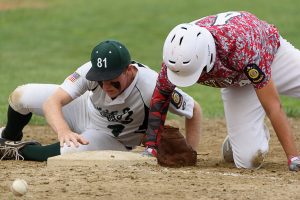 Deploying a short-handed squad (due to vacations and other absences) and a taxed bullpen, Westfield struggled to keep up. Nearly every Greenfield hit found a hole and defensive errors were magnified as both games wore on. Post 124 failed to string together nary a hit.
In the first game, Greenfield pitchers Michael Bassett and Brodie Baird tossed a combined three-hitter and Post 81’s offense exploded for seven runs in the second inning en route to a 10-0, five-inning shutout.
Greenfield loaded the bases in the second inning with a walk, an error, and a Dylan Martin bunt that died in the infield grass. Jake Sak drew a walk with the bases loaded, but the runner crossing home never touched the plate and was ruled out. Kyle Barnes walked to score the team’s first run. Then, the hits started to fall in tough-to-reach spots and things began to spiral out of control.
With two outs, Greenfield’s David Carey drove in two runs with a base hit to right center field, just beyond the grasp of the center fielder. Jacob Quinn hit a run-scoring single to left center field. Ben DeMartino walked. Cam Lococo followed with a two-run line drive single up the middle. A RBI single from Brodie Bard made it 7-0.
It was too much for Westfield to overcome. Jayden Rodriguez, Jim Cloutier, and Ryan LaPoint finished Game 1 with the lone hits for Post 124.
Westfield entered the second game with renewed hope but things once again quickly unraveled.
Greenfield played a bit of small ball to begin the game. Barnes led off the top of the first with a base hit. Bassett moved him over with a sac-bunt. Quinn scored Barnes with a base knock to right field.
In the third inning, Greenfield loaded the bases with the aid of a Westfield defensive miscue and base hits from Barnes and Bassett, the latter a perfect bunt in front of home plate. With one out, Quinn smacked a two-run double to left field. A RBI single from Kevin Baumann made it 4-0. Post 124 botched a potential inning-ending 1-2-5 double play when the ball got away from the catcher at home plate, allowing two more runs to score. Post 81 led 6-0.
The misfortune continued in an error-laden fourth inning. Four more runs, including a two-run single to right field from Baumann increased the Greenfield lead to 10-0.
The lead ballooned again in the fifth when four consecutive singles, the last of which came from Ben Matino drove in two runs to make it 13-0.
Westfield managed four hits in the second game. Dan Provost and Dylan Arooth each doubled. Cloutier and Joey Calderella had one hit apiece.
Notes: Westfield was forced to play its home game on the road in Greenfield as they needed a field with lights. Bullens Field was unavailable for use with the Starfires in action at home Wednesday night.