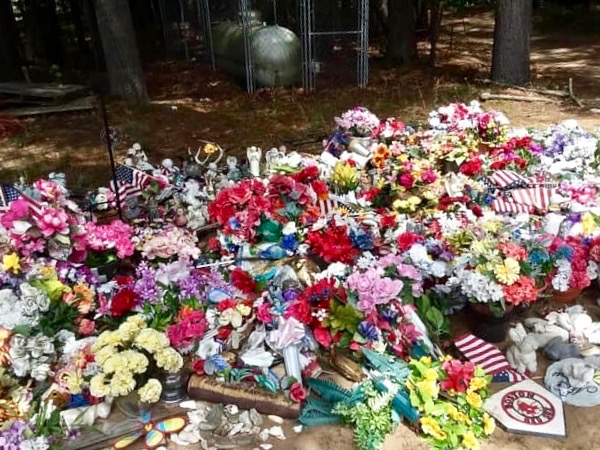 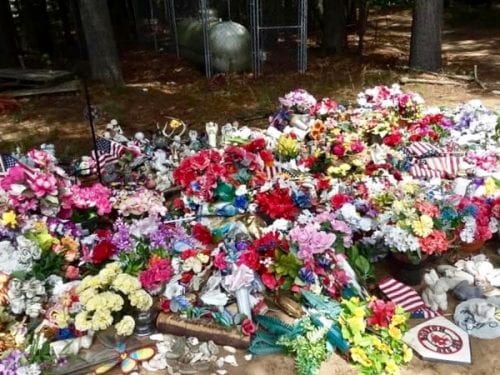 WESTFIELD – Residents took to Facebook this week to express their upset at the removal of personal items from grave sites at St. Mary’s Cemetery. The items were placed on pallets by the fence.

Several residents said their memorial items had been in place for years, and they were not notified that they would be removed. Cindy Drewski of Westfield said she was outraged and had called the office at St Mary’s Cemetery, where she was told that this was the policy of the cemetery.

“My question is why has this been allowed for years and more importantly why were family members not informed that their personal property was going to be removed and put on pallets outside? Why weren’t people notified that this was in violation of the policy and give us some time to remove items,” Drewski said.

St. Mary’s Cemetery, located at 203 Southampton Road, is 90 acres in size and currently holds about 13,000 burials. The facility was transferred under the Springfield Diocesan Cemeteries, Inc. management in 2003.
According to the Rules and Regulations on its website, the church owns and operates the cemeteries for the common good. Those who purchase burial rights (no land or property is purchased) within Catholic cemeteries are issued easements of burial. Rules are adopted for good order and to manifest the church’s beliefs and teachings. Compliance with rules and regulations are a condition of the easement.
No hearts, bibles, novelties, temporary crosses or grave markers and the like are permitted at any time. This also applies to statues, votive lights and toys. According to management, hese items tend to disrupt the beauty and serenity of an area and have been a source for complaint from adjacent easement owners. These items will be removed by cemetery personnel.
The cemetery assumes no responsibility for loss of any item or damage to flower pots or other containers and maintains the right to dispose of broken or unsightly containers at any time, the rules state. “I sincerely hope that the management of Gates of Heaven work with the families to return the items removed from their loved ones’ sites,” said At-large City Councilor Kristen Mello, who shared the concern of one resident and a photo taken at the site on a Facebook forum.
“For what it is worth, I am told the on-site caretaker has been very responsive and caring with the family members,” Mello added.

Joseph M. Kostek, Director of Diocesan Cemeteries, said that the workers at the cemetery had made a judgment call, and were letting some things go that are not allowed by the policy.  Kostek said things were “getting carried out of hand.”

Kostek asked them to stay within the policy and remove the items.  He said the policy is for a good reason. Artificial flowers, for example, have steel stems, causing problems when the wind blows them over, and they can injure people and can cause flat tires.

Candles also cause problems.  He said a week and a half ago, someone lit a votive by the gate, which burned half an acre of grass.  Fortunately it rained or it would have lit up the trees, Kostek said, adding that was not their first fire.

He said the workers were very respectful when removing the items, placing them together in groups on the pallets. He said the head caretaker is also out there talking to people and explaining the policy.

Kostek said the Diocese took over the cemetery in 2002, when it ran out of money.  At the time, he said they did not have the money for a lawnmower.  Since then, they have invested more than a million dollars in improvements, including a brand new fence,  planting 175 to 200 trees, and purchasing a new backhoe, dump truck, pickup truck, and lawn mowers.

“I think we’ve made many improvements to the cemetery,” Kostek said.

He said the last few years, people started to put out things again that are not allowed.  He said most people don’t realize that when they buy a burial plot, they do not own the land; the cemetery still owns the land.

Kostek said the cemetery does a cleanup twice a year, in the spring and in the fall from Oct. 1 to Dec. 1.  After Dec. 1, people are allowed to put out Christmas boxes, and are also allowed to put artificial flowers in them until March 1, because they are not mowing the cemetery.

In the summer, people are allowed to place one potted plant per grave, along with military symbols.

Kostek said they respect the flag. “If we see the flags on the ground, we pick them up,” he said.

“We’re very kind. I train our people to be nice to people, even if they’re being sweared at, they’re not allowed to raise their voices.  If they do, they lose their job,” Kostek said.