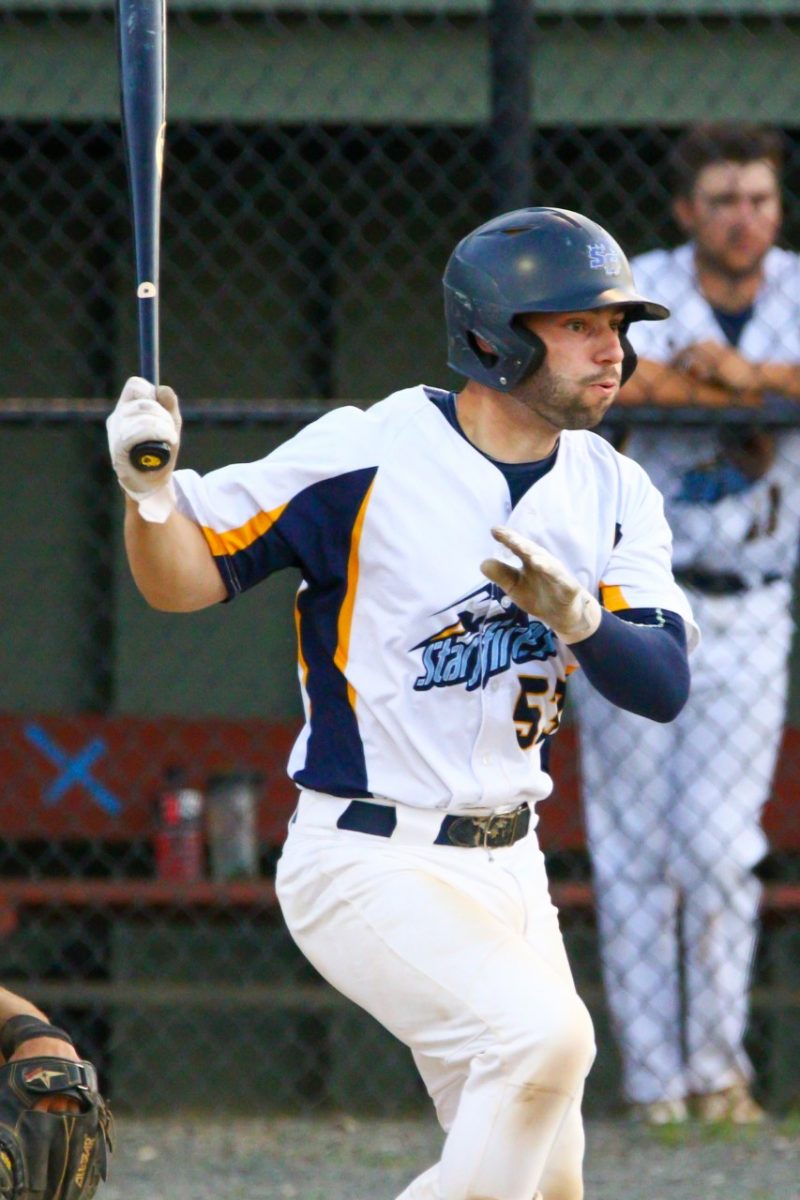 WESTFIELD – What’s all the buzz about? Well, on Friday night it was the Bees.
No. 8 batter Matthew Donlan (Stonehill College) went 2-for-4 with a home run and three RBIs and the New Britain Bees held off the Westfield Starfires 7-5 in a Futures Collegiate Baseball League game Friday evening at Bullens Field.
New Britain’s Nos. 8 and 9 batters accounted for five of the team’s seven runs. No. 9 hitter Ryan Bagdasarian’s 2-run single in the sixth inning provided the Bees with enough of a cushion to survive the outing.
Westfield Starfires starting pitcher Chase Jeter (Sacred Heart University) opened the game by retiring the side 1-2-3, but New Britain still found a way to get to the hurler early. 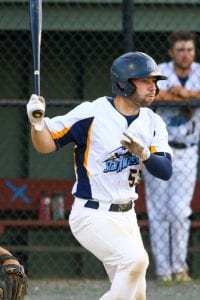 New Britain’s clean-up hitter, Mike Caruso (Fairfield University) drilled a line drive down the third base line for a double to begin the second. Noah Martinez (Central Connecticut State University) smacked a single off the foot of Jeter for a single. Derek Tenney (University of Hartford) nearly grounded into a double play, hitting a ball to Westfield shortstop Eric Callahan (Millersville University), who tossed the ball to second baseman Drew DeMartino (University of Hartford), of Pittsfield for the first out of the inning at second base. DeMartino, in turn, fired the ball to first baseman Anthony Porrino (Sacred Heart University). The throw was a bit too high though, taking Porrino off the bag momentarily, and Tenney was safe. One run scored. Two batters later, Donlan hammered a two-run homer over the right field fence to stake his team to a 3-0 lead.
Westfield responded with its first runs of the game in the home portion of the third inning. Braydon Seaburg (Quinnipiac University) singled. Mark Coley (University of Rhode Island) and Chicopee’s Ramon Jimenez (Boston College) walked, setting the table for Andre Marrero (Quinnipiac University), of West Springfield. A breaking ball got away from the catcher, resulting in a run-scoring wild pitch. Marrero walked, loading the bases again. Callahan walked, pushing another run across the plate. A ground out ended the inning.
Westfield continued to put base runners on against New Britain starter Alex Price (Middlebury College).
With one out in the bottom of the fifth inning, Jimenez doubled. Porrino singled. Marrero walked to load the bases. Callahan smacked a RBI single to right field, also knocking Price from the mound. New Britain reliever Brad Lombardi (Boston College) came on to record a strikeout and ground out to end the threat.
New Britain reclaimed the lead in a big way in the sixth.
Griffin Arnone (Elon University) walked. Mike Caruso (Fairfield University) moved Arnone over with a sac-bunt. Martinez was hit by a pitch, signaling the end to Jeter’s outing. In the next at-bat, Tenney put the ball in play near the third base bag. Jimenez fielded the ball and attempted to throw the baserunner out at home plate rather than take the out at first base, but the ball sailed past the catcher. With two outs, Donlan hit a run-scoring single into left field. Bagdasarian (Eastern Connecticut University) smacked a bounding ball through the left side for two more insurance runs and a 7-3 lead.
Westfield threatened again in the sixth when Drew DeMartino drew a two-out walk and Jimenez singled. A strikeout ended the inning though as the 10th Starfires base runner of the game was left stranded.
Westfield’s persistence paid off in the seventh when Michael DeMartino (Southern Connecticut State) drove home Callahan with a dinger to right field. Callahan was on base after doubling.
Jimenez reached base for the fourth time in the contest with a two-out single in the eighth inning. The game-tying run was now represented at the plate, but another base runner was left stranded.
New Britain reliever Ben Talbot (Holy Cross) retired the side 1-2-3 in the ninth, striking out two of the three batters he faced.
Notes: The also fell to New Britain on Saturday as New Britain used a three-run first-inning to down Westfield 6-3. With the loss, the Starfires fell to 9-14 overall, and trailed first-place Worcester (15-7) by 6.5 games in the FCBL standings.