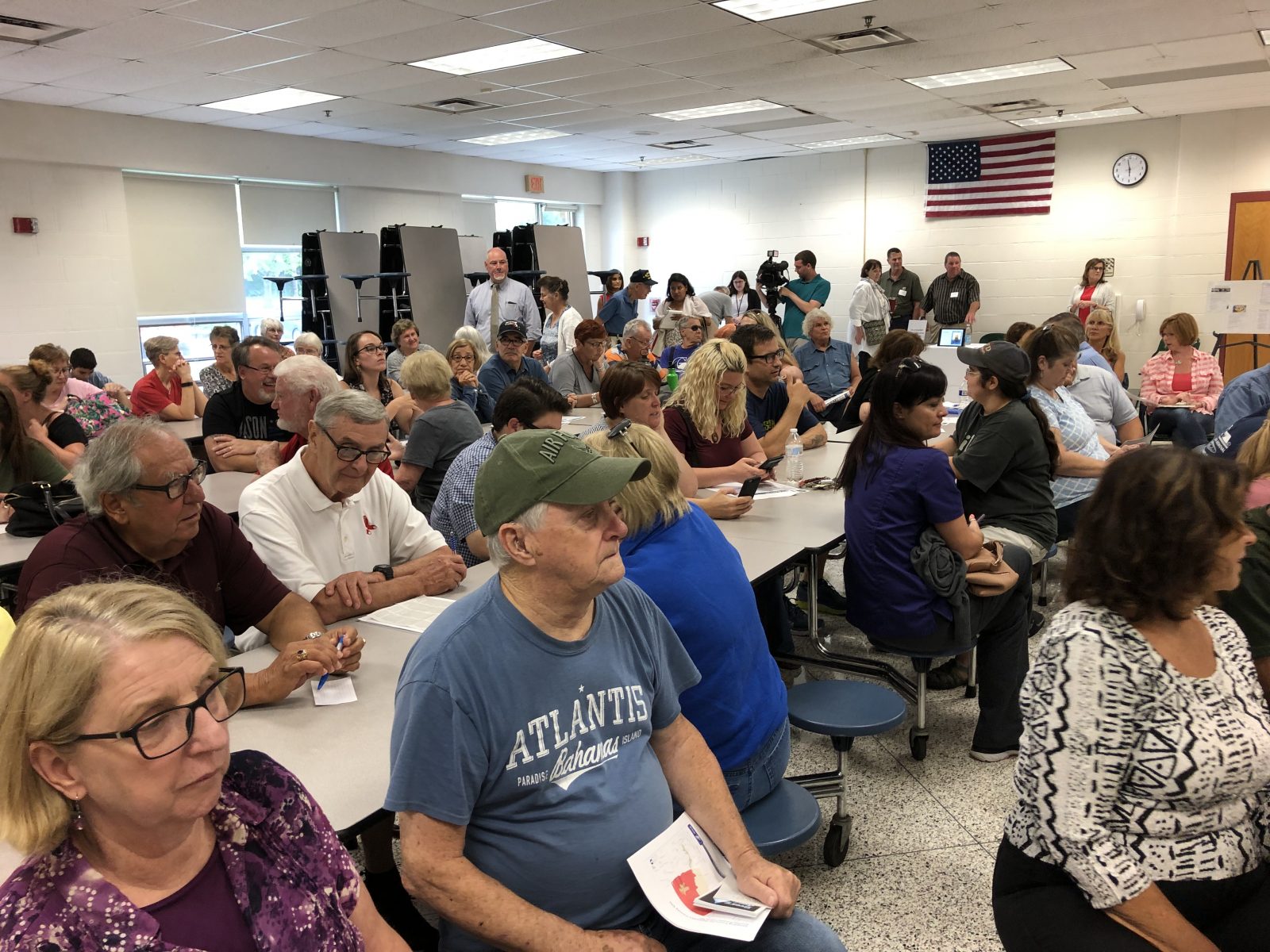 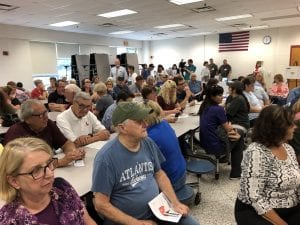 WESTFIELD – An estimated 150 to 200 residents packed the Westfield Intermediate School on Tuesday to hear details of the city’s impending PFAS Exposure Assessment planned by the Center for Disease Control and Prevention (CDC) and the Agency for Toxic Substances and Disease Registry (ATSDR).,
The team from the ATSDR, led by Associate Director Christopher Reh started the evening with an informal “meet and greet” session at 5:30 p.m., giving residents the time to arrive and greet each other, pick up information on the assessment, and ask questions in advance of the formal session.
Also present were Department of Public Works Director David Billips, Assistant Director Francis Cain, and other members of the DPW, who manned a table to answer questions on the city’s response to the PFAS contamination; Mayor Brian P. Sullivan, Senator and mayoral candidate Donald F. Humason, Jr., Rep. John C. Velis, a number of city councilors and candidates for elected office, including Westfield Police Capt. and mayoral candidate Michael McCabe. Representatives from Westfield Residents Advocating for Themselves (WRAFT) also had an informational table at the meeting. 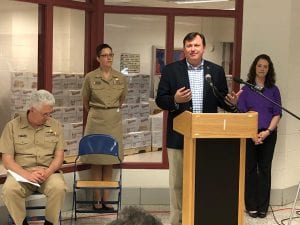 Reh said that the Westfield meeting was the first among the eight communities, all of which are near current or former military bases and are known to have PFAS in their drinking water, that were chosen for the PFAS Exposure Assessment. He said on Wednesday, the group would be holding a similar meeting in West Virginia. Other communities that will participate are located in Delaware, New York, Washington, Colorado, Texas and Alaska.
Westfield was chosen for the exposure assessment after collecting information on drinking water systems and meeting with community leaders and community members, said Capt. Tarah Somers of the U.S. Public Health Service for Region I – New England. Somers also said that now that the assessment has been launched in Westfield, the community would see her frequently.
ATSDR lead environmental scientist on the assessment Rachel Rogers said the goal is to provide information to members of the sample community about levels of PFAS in their blood and urine. Letters to invite people to participate will be going out this week, followed by a phone call, and if necessary a second round of letters.
Rogers said the ATSDR needs people who are invited to respond, because without sufficient participation, their ability to answer questions and provide useful information about PFAS exposure is limited.
Rogers also said they are not taking volunteers for the assessment, but have used a proven scientific approach called “random selection,” which will assist the agency in drawing conclusions from the entire infected area. Rogers said the individual results of the tests will be protected and provided to participants, but the aggregate results for the community will be published. She said the study does not look at health effects, but the information can be useful for future studies that do look at health effects. 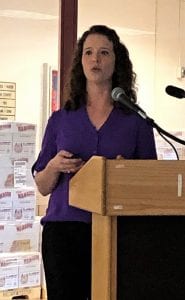 Reh said during the presentation that it would take a couple of months for the samples to be tested, and another couple of months for the report to be prepared.
Reh also said the PFAS exposure assessment being conducted will help to define the protocol for a larger nationwide multi-site study of PFAS that will kick off in September. Westfield has applied to be part of that study.
Also presenting during the meeting was Capt. Peter Kowalski, an environmental scientist with the U.S. Public Health Service, one of the uniform services which reports to the Surgeon General.
Kowalski ran down the steps of the assessment, which begins with the public meeting and the random selection of households to participate. Participants then provide blood and urine samples, and a random subset of participants, 10 to 15 homes, will be asked to collect dust and tap water. He said letters will be sent to 325 homes, with a goal of 395 samples.
Field work has been scheduled for Sept. 4 to 15, Somers said, adding, “We need you to participate with us for this to be successful.” Samples will then be sent off for analysis. A letter with individual results will be sent to participants, and a summary report with recommendations will be prepared and presented at another public meeting.
Kowalski said throughout the process, the community would be kept informed and engaged. He said they have also developed a website to answer questions at www.atsdr.cdc.gov/pfas, to which they would be adding questions from Tuesday’s meeting. Somers said she may also be contacted with questions by email at [email protected], or at 1-800-232-4636 (1-800-CDC-INFO).
Residents were then invited to come to a microphone on the floor with their questions. People began to line up, slowly at first, then less hesitantly, with others shouting questions from their seats, some angrily, wanting to know who would be held accountable for the contamination. 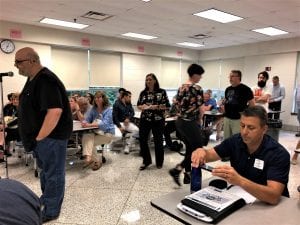 Residents line up to ask questions of the ATSDR team. (Photo by Amy Porter)

Many of the residents, who did not give their names nor were asked, did not get their questions answered, either because they were outside of the scope of the assessment, or because until the assessment is completed, the team does not yet have the answers.
Several questions involved health effects, which are not part of the study. Somers, a registered nurse, said while PFAS contaminants are not new — being first produced in the 1930’s and widely used by the 1950’s – what is new is the study of their effects on human bodies.
“We don’t have a lot of information yet to say if you have this in your body, at what level does it become a health concern,” Somers said, adding that while that is frustrating, more information is coming out all the time. She said as a community, people can reduce their exposure. She said steps are being taken to address the drinking water by the city, and people can avoid products containing PFAS in the household. 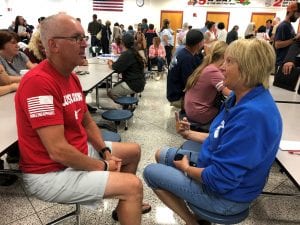 A list of common household products containing PFAS may be found on the website of the Environmental Working Group at www.ewg.org.
Before the meeting began, Kathy Hillman, a 40-year resident of Susan Drive, summed up the feeling of many in the room. “We used to have the best water. To be afraid to drink your own water is kind of scary.”