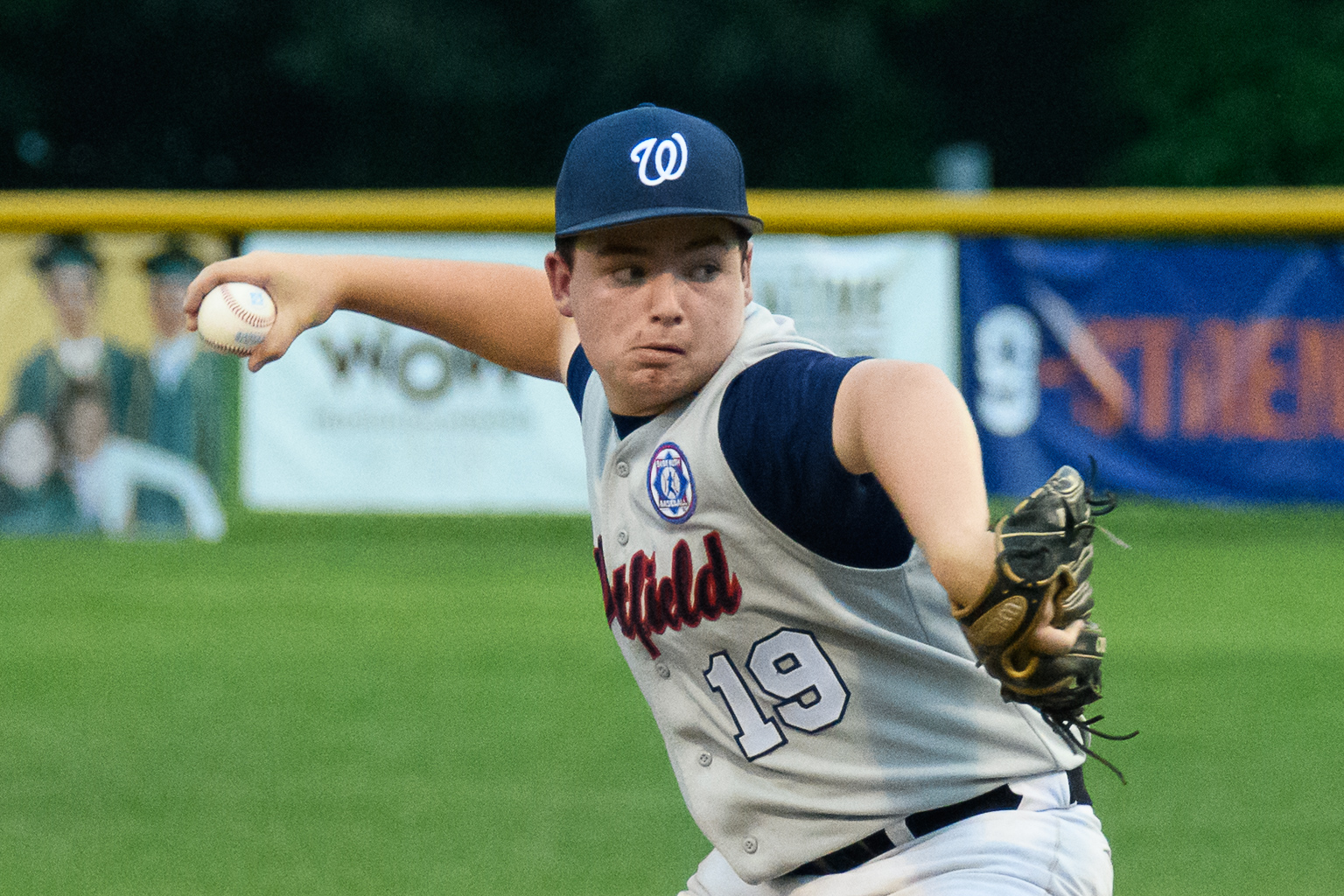 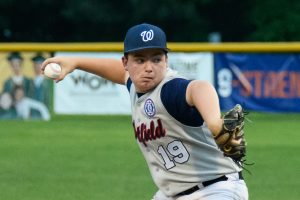 WESTFIELD – The Westfield Babe Ruth Baseball 15-Year-Old All-Stars opened up the postseason – – but so did the skies.
Pittsfield built a 2-0 lead through 4 ½ innings against Westfield in the first of the best-of-3 series in the opening round of the Babe Ruth Baseball tournament before lightning halted play Wednesday night at Bullens Field.
The game will resume Tues., July 13 at Bullens Field at 6 p.m. Game 2 will be played immediately after. If a third game is needed in the series, it will be played Wed., July 14 at Pittsfield.
Pittsfield drew first blood against their rival from the Whip City. After stranding two base runners in each of the first two innings, the road team finally struck paydirt in the third.
Pittsfield’s Nick Brindle and Damon Pause were hit-by-pitches in consecutive at bats to begin the top of the third inning. A fielder’s choice moved Brindle to third base. Pause stole second to put two runners in scoring position. Then, clean-up batter Owen Salvatore belted a one-out, two-run single to right center field for a 2-0 lead.
Westfield pitcher Ted Dunn was able to keep Pittsfield scoreless through the next two innings. After allowing the opposition’s first two runs, Dunn retired eight straight batters – – three via the K – – before the game was suspended due to storms.
Westfield had runners on base in three of the first four innings but stranded four base runners.
Deven Werbiskis and Nick Lenfest drew consecutive walks to begin the home half of the first inning, but a failed attempt to bunt the runners over and a pickoff of a base runner at third base ended that threat.
In the third, Rylie Heeter walked and advanced to second on a wild pitch for Westfield before with two outs before Pittsfield’s pitcher, Pause, induced a pop fly to end the inning. Colby Lapointe reached on a one-out infield in the fourth, but Westfield into a 4-6-3 double play.

LITTLE LEAGUE BASEBALL 11-12-YEAR-OLD ALL-STARS
Westfield 10, Agawam 1
Anthony Sanchez threw a three-hitter, striking out 10 Agawam batters to lead Westfield to a 10-1 victory at Cross Street on Wednesday night. Josh Elmer drove in three runs on two hits, including a double, to lead the offense. Jacob Barnes and Sanchez also contributed two hits apiece.
Westfield is now 5-1 in pool play and has clinched a spot in the district’s single-elimination tournament to be held next week.

LITTLE LEAGUE BASEBALL 11U ALL-STARS
Westfield 9, Holyoke 1
Westfield advanced to the winner’s bracket final with a convincing victory at home.
Carsen Michelucci pitched four strong innings, giving up no hits, no runs and striking out eight in a Westfield runaway. 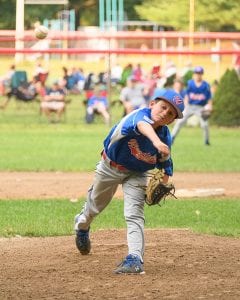 Westfield belted out 11 hits. They were led by Tyler Neal (2-for-2) and Dylan Woering (2-for-3), who had two RBI’s apiece. Coen Marchacos, Michelucci, Alex Miller, Devin Clark, Jameson Cotto, Dominic Matyseck, and Declan Burke each had a hit. Marchacos collected a pair of RBI’s, and Josh McDonald and Jaylen Dean each had one.

LITTLE LEAGUE BASEBALL 9-10-YEAR-OLD ALL-STARS
Westfield 14, Holyoke 7
The Westfield 9-10 Baseball All Stars completed round robin play by doubling up Holyoke at Paper Mill Field, improving to 3-1 to advance to Thursday’s semifinal game against Southampton at home.
Westfield played a solid all-around game to earn the darkness-shortened, four-inning game. Westfield pitchers Dustin Piper, Jakob Elmer, Dylan Rozell, and Jackson Barnes each pitched one inning and combined to give up only four hits while striking out four.
Westfield batters clubbed seven hits and drew 13 walks. They were led by Drew Bean and Dustin Piper, who had two hits apiece. Jakob Elmer, Clayton Cigal, and Evan Lucas each contributed hits in the winning effort.
Defensively, Westfield made several nice plays in the field. They turned two double plays and thew out a Holyoke runner attempting to score on a passed ball. – Westfield Little League contributed to this article