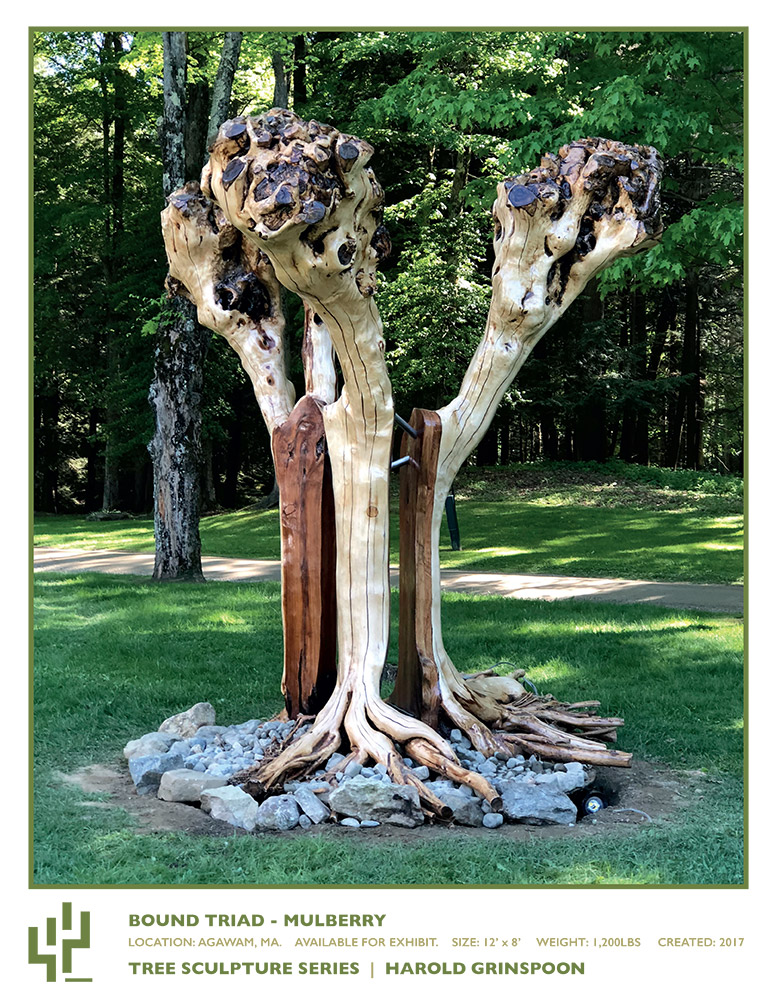 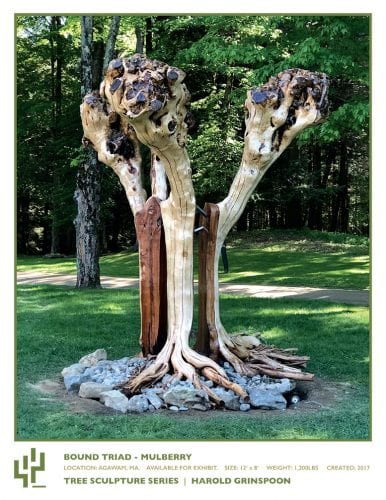 WESTFIELD – Planning Board Vice-chair Cheryl Crowe is looking to bring unique sculptures in the form of tree art to a Westfield city park. The tree art is by Agawam sculptor and philanthropist Harold Grinspoon.

Crowe said she was first alerted to the possibility by Planning Board Chair William Carellas. “Bill knew I was big on art and reached out to me last fall. I started investigating it, and was fascinated with what Grinspoon was doing with the trees.”

For the past 20 years, Grinspoon, who is 92, has been taking dying trees and giving them new life in sculptures. “Grinspoon saw that by quartering a tree, rearranging the separate quarters and finding an artistic relationship he could create a dynamic structure,” according to  to haroldgrinspoonsculptures.com.

“He takes trees when they’re dying anyway, from disease and weather, and gives them a new voice out of their original purpose in life. He creates a nostalgic art out of the tree limbs of a dying tree. In my perspective, he’s renewing nature that’s already dying into another form that’s beautiful,” Crowe said, adding that these days, Grinspoon, “has had a lot of apprentices who he’s taught. They do the work now for him, and he guides them through and lets them know exactly what he’s looking for.”

Crowe said one of his pieces is installed in Park Square Green in West Springfield, another at the MGM Casino in Springfield, and several more are at the Agawam Corporate Center. Interested in bringing one to Westfield, she reached out to the artist through his curator Madline Calabrese, who met her and toured several parks where the art might go.

“Tree art is really unique, and it won’t cost the city one cent. Harold Grinspoon likes to put them in cities and towns with high visibility for free, and they’ll come in and install it themselves,” Crowe said, adding that he likes people to have beauty in their town, and it gets his name out. 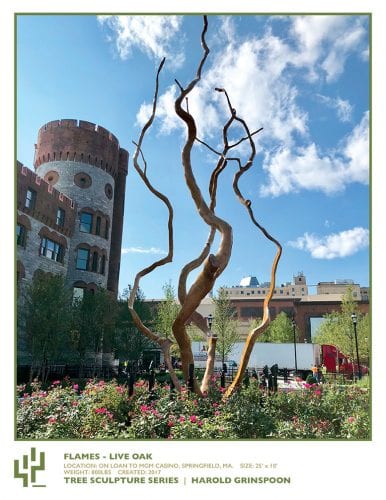 Flames-Live Oak. On loan to MGM Casino in Springfield. (haroldgrinspoonsculptures.com)

Crowe said that it will be between Grinspoon and the city to choose the appropriate location. The sculptures are 20 to 40 feet high, some surface mounted and some buried in the ground. She said the installations may be for anywhere from two to five years.

Crowe is now seeking permission from the Parks & Recreation Committee to find an appropriate placement for the art. At the Sept. 29 meeting, two parks were discussed, the Kane/Wojtkiewicz park on North Elm Street behind the clock tower, and the Sgt. John Hussey Memorial Park at the intersection of Holyoke Rd. and North Elm near the turnpike. “Parks & Rec is open to this, and I’m grateful for that,” Crowe said.

Some concern was expressed at the meeting about obstructing the view of oncoming traffic at Sgt. Hussey Park. Crowe said she didn’t believe the sculptures would impede the view of traffic.”I understand where you’re coming from. They won’t obstruct the view like the trees did. I walked there and thought about being a driver. The branches are not big and massive,” she said.

Crowe said right now she is working with Parks & Rec on a site visit this week to go look at those locations. She is hoping for a decision to be made this month, because Grinspoon prefers to install the art in November, when the ground isn’t yet frozen.

“I just want to thank Parks & Rec for really being open-minded on this, and really working with Madeline and myself for how this would work for our city. I’m grateful to them for keeping an open mind,” Crowe said.

“My heart goes out to the sculptures because I grew up on lumber. Harold has the same respect for the trees,” Crowe said. She also talked about Grinspoon’s other work as the founder of the Harold Grinspoon Foundation. “He provides literacy and heritage to Jewish children, and he edits books, and sends out 60,000 books to countries all over the world for kids to read.”

Grinspoon’s name is also attached to the annual Excellence in Teaching Awards, which is underwritten by another venture, the Harold Grinspoon Charitable Foundation, in partnership with other area charities and businesses.

“I’m putting this under the Planning Board to get credit for it. The chair reached out to me. We as a Planning Board have been wanting to give back to the city. This has never been done, and is really unique. We’re all thrilled about that,” Crowe said.